2020's summer rally for the S&P 500 (Index: SPX) came to a crashing end on 3 September 2020. It turns out a good portion of the rally that preceded its sudden was juiced by an unusual investment strategy launched by Japan's SoftBank, a venture capital investment bank that appears to operate similarly to a hedge fund.

In that strategy, SoftBank took a portion of the proceeds it obtained from the sales of its stakes in T-Mobile (NASDAQ: TMUS) and Alibaba to buy both shares and call options in firms like Amazon (NASDAQ: AMZN), Netflix (NASDAQ: NFLX), Tesla (NASDAQ: TSLA), Microsoft (NASDAQ: MSFT), and Alphabet (NASDAQ: GOOGL and GOOG). The crash came when SoftBank unwound its trades in these NASDAQ-exchange based stocks during the first two weeks of September 2020.

Most of the news articles reporting the story have focused on what SoftBank was doing during the month of August, but we had a different question. When did SoftBank's 'NASDAQ whale' start this rally-juicing strategy?

Previously, we noted two major shifts in the apparent value of the amplification factor we use in our dividend-based model for projecting future stock prices. The first came on 7 July 2020 when its value suddenly shifted from 1.5 to 0.5, the second a week later on 14 July 2020, when it suddenly shifted again, this time to a value of -0.5. The alternative futures chart we use to project future potential trajectories for the S&P 500 shows the corresponding adjustments in those trajectories at these dates: 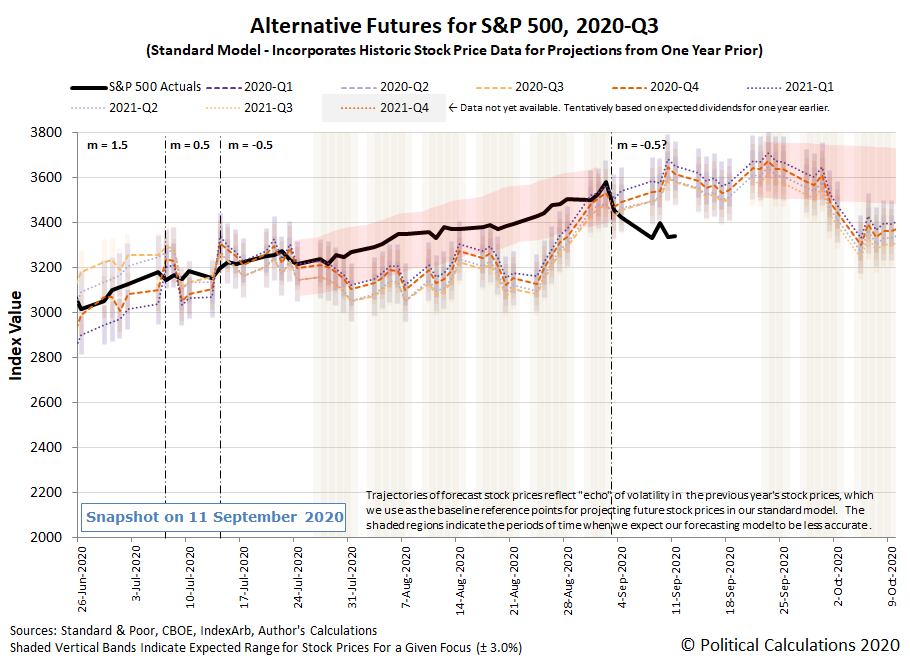 We think SoftBank's NASDAQ whale's investing strategy started in earnest at the time of the first shift as funds from SoftBank's 24 June 2020 sale of its T-Mobile holdings started to become available, which then ramped up to the level it would sustain through the end of August in the following week.

With the unwinding of its trades in September, we've taken a preliminary stab at estimating the current value of the amplification factor, which we're tentatively putting at a value of 1.0. That shift is shown in a modified version of the alternative futures chart. 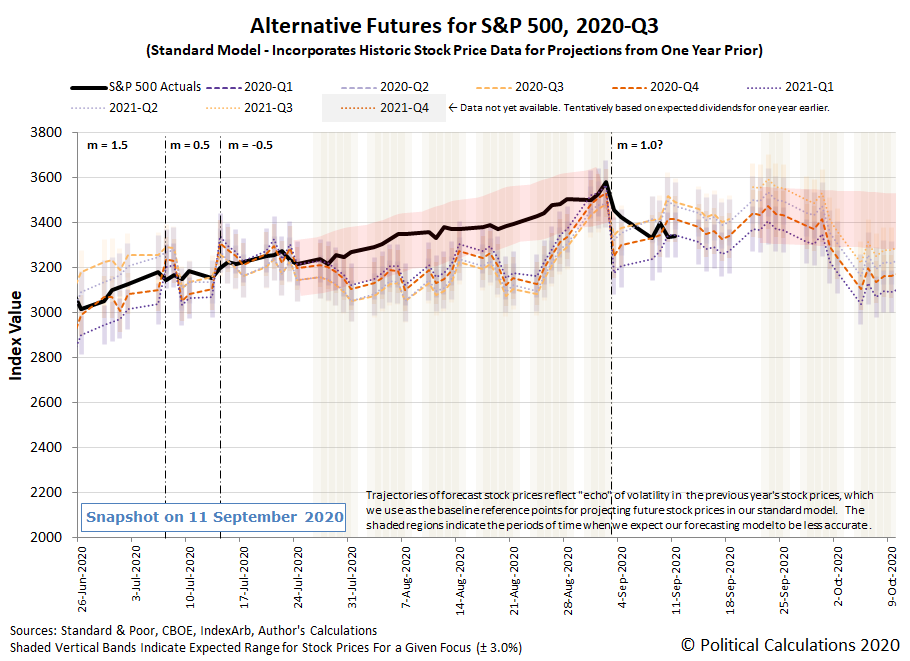 The shifts in the amplification factor are pretty amazing, especially in considering that a single trader still potentially has this kind of effect upon stock prices. Where's FINRA and the SEC when you need them?

Looking forward, the upcoming week will hopefully provide enough additional data for us to more firmly estimate the value of the amplification factor now that it seems free from the sway of SoftBank's NASDAQ whale.

Looking backward, here are the headlines that we noted for their market-moving potential in the last week.

Ready to compare and contrast the significant news items for the week? Barry Ritholtz' summary of the week's positives and negatives he found in the past week's economics and markets news is available for your reference (although it's extra succinct this week)!