A little over a month ago, a wave of coronavirus infections was cresting and beginning to recede in states across the U.S.' sunbelt. One month later, that delayed first wave of infections that struck southern and western states is clearly receding.

We've put together the following three-in-one chart to show the major trends in the daily progression of COVID-19 infections in the United States from 10 March 2020 through 15 September 2020. The three charts show:

Please click here to see the full-size version of this chart.

After six months, the progression of SARS-CoV-2 coronavirus infections in the U.S. is as much a story about geography as it is about an epidemic. While data for the U.S. as a whole looks like it has gone through multiple waves, in reality, the virus has struck different states and regions of the country at different times, with individual locations in the U.S. only experiencing a single wave of infections.

That dynamic reality becomes more clear when we drill down into the Coronavirus Tracking Project's data at the state and territory level.

The latest update to our skyline chart showing the progression of coronavirus cases, hospitalizations, and deaths in the fifty states and six territories of the United States confirms the improving situation for coronavirus cases across much of the nation.

You can see that improvement in the 'straightening' sides of the orange-shaded portion of the towers indicating the share of each state or territory's population that has returned a positive result in coronavirus testing to detect active infections. You can also see the improvement in increasing amount of 'green' shown in many of these charts, which reflects estimates the of number of recovered coronavirus cases or that more conservatively report the number of coronavirus patient discharges from hospitals (some states don't report this data).

States whose COVID progression towers have bases that resemble widening cones are those that are still facing growing numbers of cases. Many of the states and territories in this category also have lower populations than states that have passed through peaks in daily reported cases, which suggests future numbers of new cases will continue to fall when compared to current levels.

Meanwhile, a handful of states and territories have towers that look like needles when presented on the same horizontal and vertical scales with respect to their populations, having experienced little spread of the infection. That may not be as positive as it sounds, because it suggests they may be more at risk of future outbreaks because their residents will not have had the exposure that would lead to the level of herd immunity that states with much larger outbreaks have developed. Developing herd immunity among the portions of the population most tolerant of the infection while protecting the most vulnerable portions can work as an alternative strategy for managing the spread of viral infections for which vaccines are not yet available.

Overall, Louisiana continues to rank at the top for percent of population with confirmed active infections during the first six months of the coronavirus pandemic in the U.S., followed by Florida, Mississippi, and Arizona.

In the next four charts, we compare the progression of COVID-19 cases and deaths in New York against Louisiana, Florida, Mississippi, and Arizona. Why these four states? Like New York, each has recorded a peak value of 40 or more positive new coronavirus cases per 100,000 residents on one or more days during the last six months, making their experiences directly comparable in relative scale.

Here are the four charts. 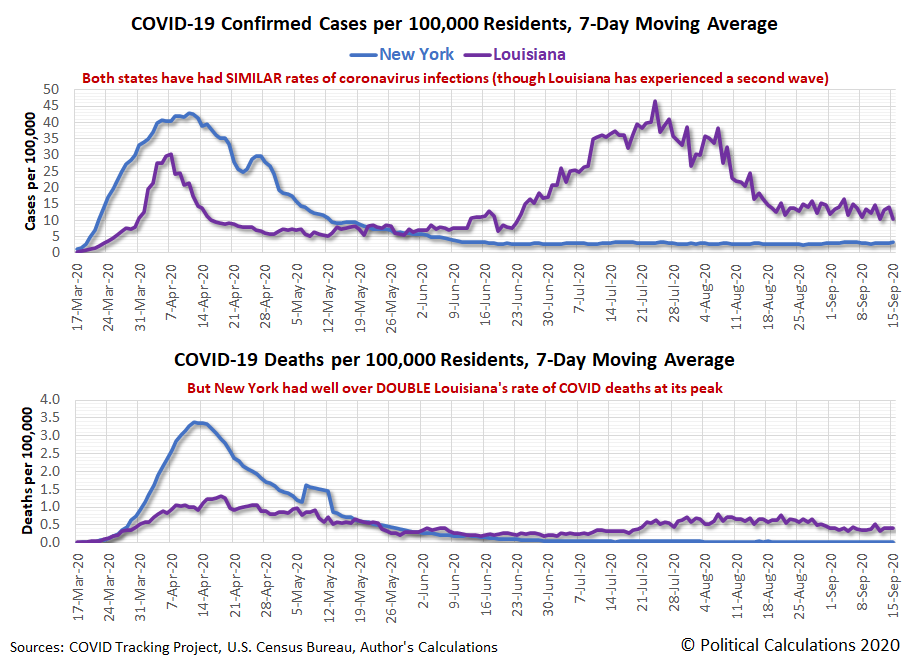 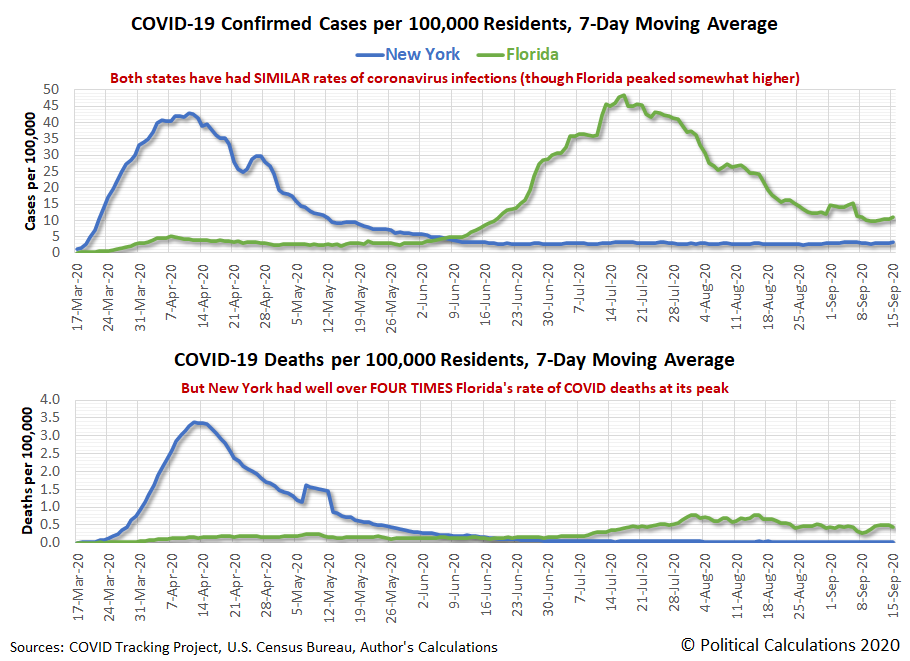 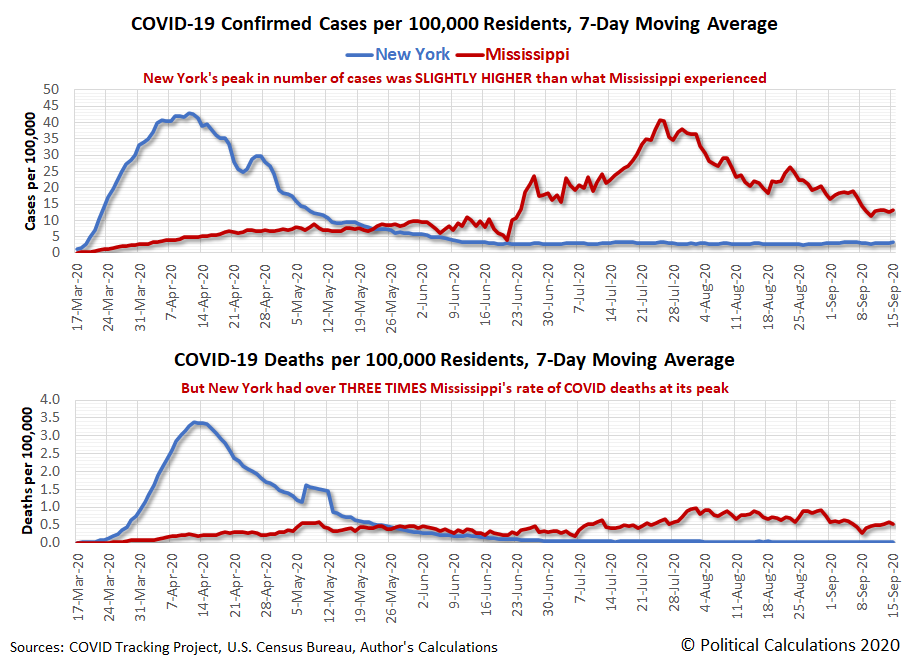 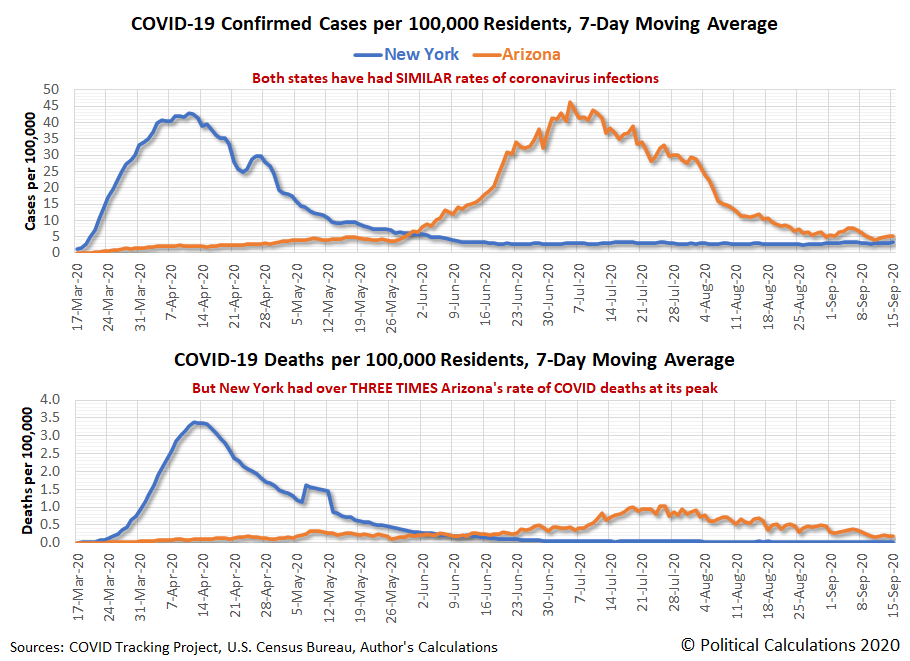 Although each of these four states has experienced similar rates of coronavirus cases as New York, each has also underrun New York's COVID-19 death tally. Unlike New York, none of these states adopted a policy of forcing nursing homes to admit coronavirus patients without testing to determine if they were still infectious. Consequently, these states have generally outperformed New York in avoiding coronavirus deaths by reducing the rate of exposure of the SARS-CoV-2 coronavirus among the most vulnerable portion of their populations: the sick and elderly.

Of these states, Louisiana stands apart because it has experienced what appears to be a second wave of coronavirus infections at the state level. However, it might be more accurate to describe its situation as the result of different portions of the state experiencing separate waves. Its 'first wave' is attributable to New Orleans' Mardi Gras celebration that drew visitors from around the country, where outbreaks were largely concentrated within the parishes making up the city's metropolitan area in the weeks following the event.

By contrast, Louisiana's 'second wave' has mostly taken place in the state's other parishes, where the incidence of cases resembles the delayed first wave effect experienced by other states.

Finally, the Wall Street Journal has recognized Arizona's successful decentralized approach to subduing its delayed wave of coronavirus cases, which will come as no surprise to our readers.