The S&P 500 (Index: SPX) has come to revolve as much around the miscellaneous pronouncements of various minions of the Federal Reserve as it does about their expectations for the fundamental future business prospects of the 500 largest publicly-traded U.S. companies.

The latest sign of how deeply dependent investors have become on those pronouncements on Tuesday, 22 February 2020. Speaking to a virtual forum of Official Monetary and Financial Institutions, Chicago Fed President Charles Evans 'accidentally' set a new expectation the Fed's future monetary policy would be less expansionary than it previously communicated it would be in announcing its new average inflation target policy.

For the dividend futures-based model we use to project the future potential levels of the S&P 500, that kind of change alters the model's amplification factor, which we think shifted from +1.0 to +1.5 as a direct consequence of Evans' statement. We've visually indicated that shift in the latest update of the alternative futures chart indicating the model's future projections. 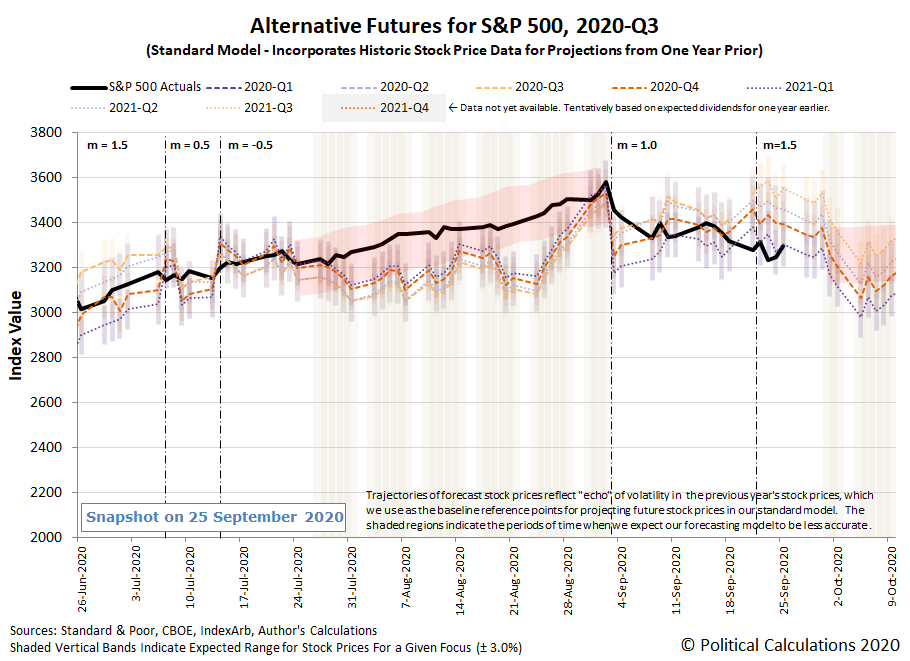 That change also occurs as investors would seem to have shifted their forward-looking focus from 2020-Q4 toward the more distant quarter of 2021-Q1, which began last week. We think that shift can be best understood as the market starting to pay much closer attention to the 2020 election, whose outcome will have considerable impact on the future for the U.S. government's fiscal policies. We anticipate investors may switch their focus back and forth between 2020-Q4 and 2021-Q1 severval times before the end of the 2020 calendar year.

We've described Evans' rate hike statement as 'accidental' since he attempted to walk it back on the next day, though the level of the S&P 500 indicates his effort, combined with the statements of other Fed officials, was unsuccessful.

Speaking of which, there was quite a lot of noise coming from the Fed's minions in the trading week ending on 25 September 2020, mostly calling for the U.S. government to step up its fiscal stimulus efforts. There was other stuff too, but that's what stood out to us in reviewing what we consider to be market-moving headlines from the week's newstream.

Barry Ritholtz presents the positives and negatives he found in the past week's economics and markets news over at The Big Picture.

Finally, for those looking for a primer of how the outcome of an election can alter the future expectations of investors, be sure to review the history of 2012's Great Dividend Raid, which we had the pleasure of documenting in real time as it happened!

Update 1 October 2020: Following the close of trading on 30 September 2020, we've tweaked the alternative futures chart to refine the start of the next redzone forecast range, which we're now showing as beginning on 1 October 2020. Here's the updated chart: 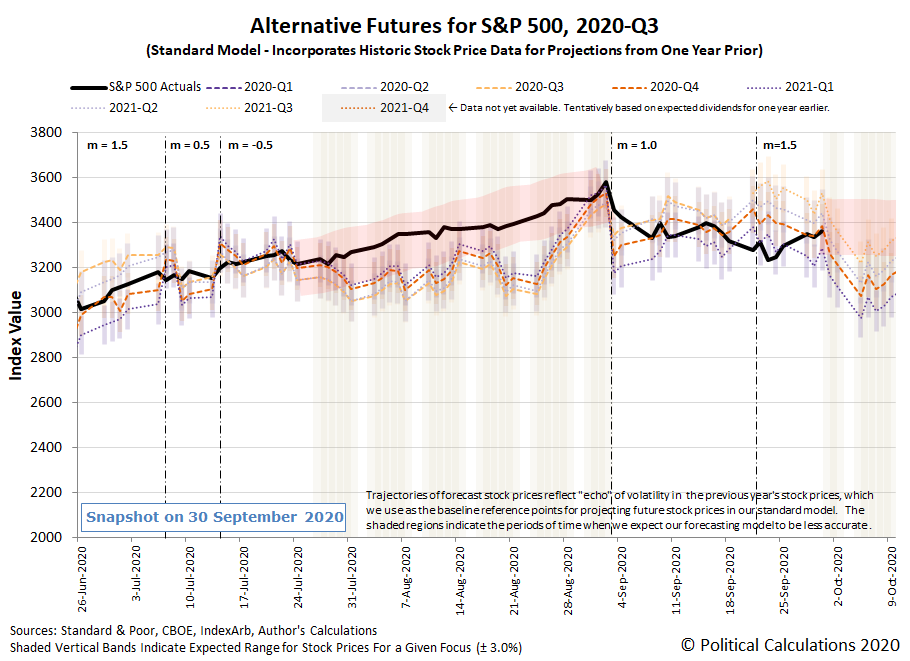 On Monday, 28 September 2020, investors shifted their forward-looking focus from 2020-Q1 back toward 2020-Q4. The new redzone forecast range assumes investors will hold their attention on 2020-Q4 through 28 October 2020. We anticipate investors may continue to shift their investing time horizon between these two quarters in the weeks ahead. While a strong focus on 2020-Q4 would see the trajectory of the S&500 run within the forecast range, we would see shifts toward 2020-Q1 would coincide with the trajectory of the S&P 500 running toward the low end of the forecast range, if not falling below it.