As of September 2020, the cumulative amount of world GDP lost to the coronavirus pandemic has reached $12 trillion.

That estimate is based upon the trailing twelve month average for the year over year change in the concentration of atmospheric carbon dioxide measured monthly at the remote Mauna Loa Observatory. Since originating in China in December 2019, the pace at which CO₂ accumulates in the Earth's air has fallen from 2.91 parts per million to a preliminary estimate of 2.55 parts per million in September 2020 as the economic impact of the pandemic has registered across the globe.

The good news is that September 2020 initially appears to mark a bottom for the global coronavirus recession in the absence of any additional widespread government-mandated, economy-crushing lockdown measures. The falling trend since December 2019 can be seen in the latest update to a chart, which shows the history of this measure against a backdrop of the timing of major world economic events since January 1960. 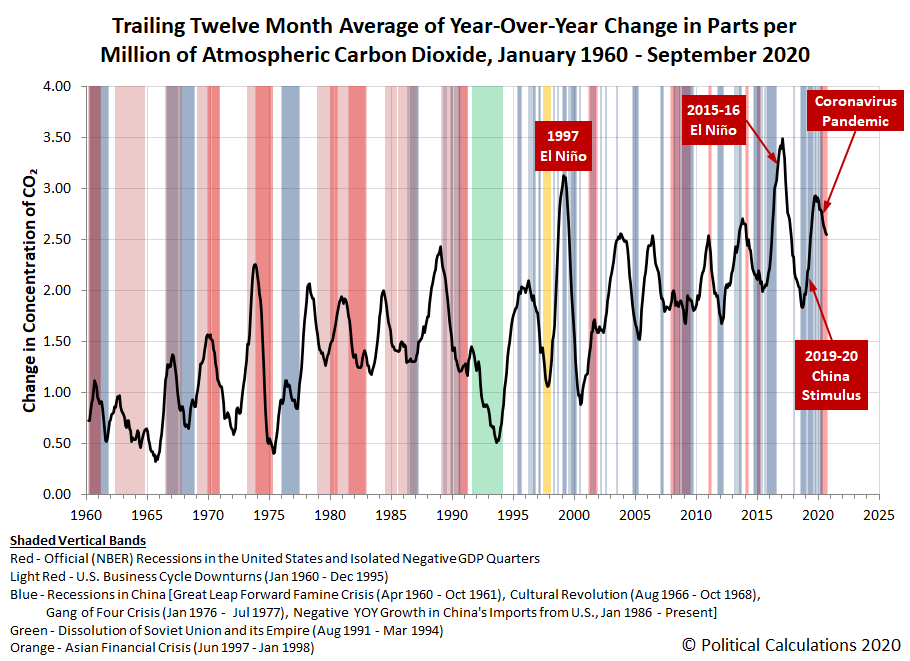 The cumulative decline of just 0.36 parts per million of carbon dioxide in the atmosphere roughly translates to the equivalent of a $12 trillion reduction in the world's Gross Domestic Product. The default values in the following tool confirm the results of the math we have previously confirmed provides estimates of lost GDP in the right ballpark. If you're accessing this article on a site that republishes our RSS news feed, please click through to our site to access a working version of the tool.

The estimated $12 trillion cumulative GDP loss from December 2019 through September 2020 is aligned with the International Monetary Fund's 24 June 2020 projections of the total economic impact from the coronavirus pandemic.

How do we know that's likely a bottom? Following a trend of deceleration in the rate of change of atmospheric CO₂ concentration since May 2020, the falling trend appears poised to reverse with October 2020's data. Combined with typical seasonal variation in the raw data, we think October 2020 will show an uptick in the trailing year average rate at which CO₂ accumulates in the Earth's atmosphere.

And then there is the little matter of what China's government is doing to stimulate its economy. As they did throughout 2019 up until its coronavirus outbreak sidelined it for several months, Chinese leaders have resumed their planned stimulus measures, which includes firing up lots of new coal-burning power generation plants. It has just been a matter of time before their output began showing up in the Earth's atmosphere's carbon dioxide levels.

Despite pledges to wean the economy off coal with the world's most ambitious investment in renewables, China's coal consumption climbed back in June this year to near the peak levels seen in 2013.

That was in part due to a pivot back to coal after geopolitical uncertainty in the Saudi peninsula, China's main oil supplier.

But the coronavirus, which saw the Chinese economy contract for the first time in 30 years, also opened the taps from government lenders to build new coal plants to revive flatlining provincial economies.

Those changes mean that China's world-leading carbon emissions will be getting even bigger. Which is no small matter, because through 2018, China was already closing in on doubling the United States' entire national output of carbon emissions, and that's before China's leaders threw its carbon-emitting floodgates wide open in 2019. 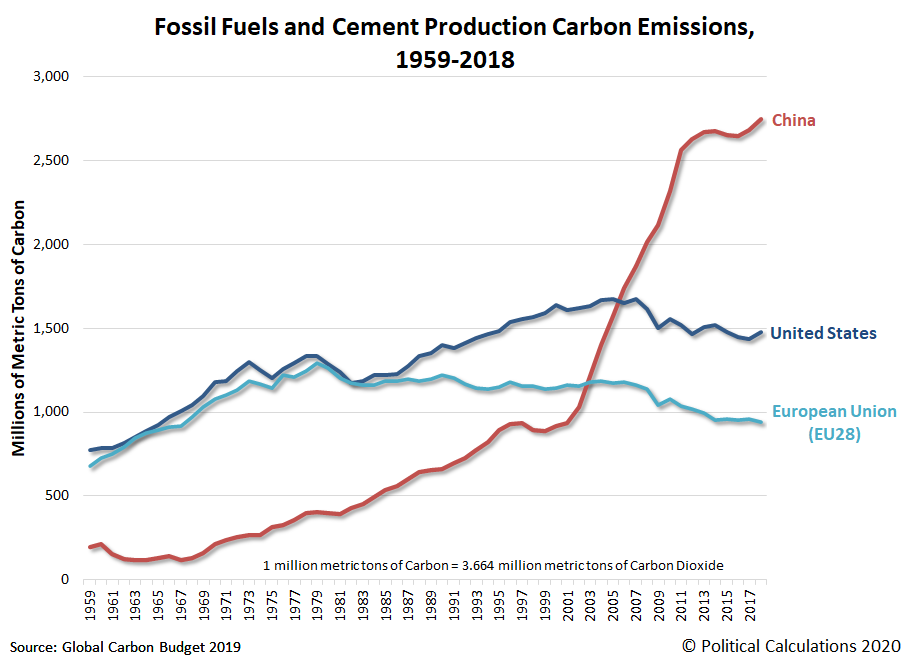 Cederborg, Jenny and Snöbohm, Sara. Is there a relationship between economic growth and carbon dioxide emissions? Semantic Scholar. [PDF Document]. 2016.