Here is a chart showing the rolling 7-day average of newly confirmed COVID-19 cases per 100,000 residents in the United States and in the 27 nations that make up the European Union. 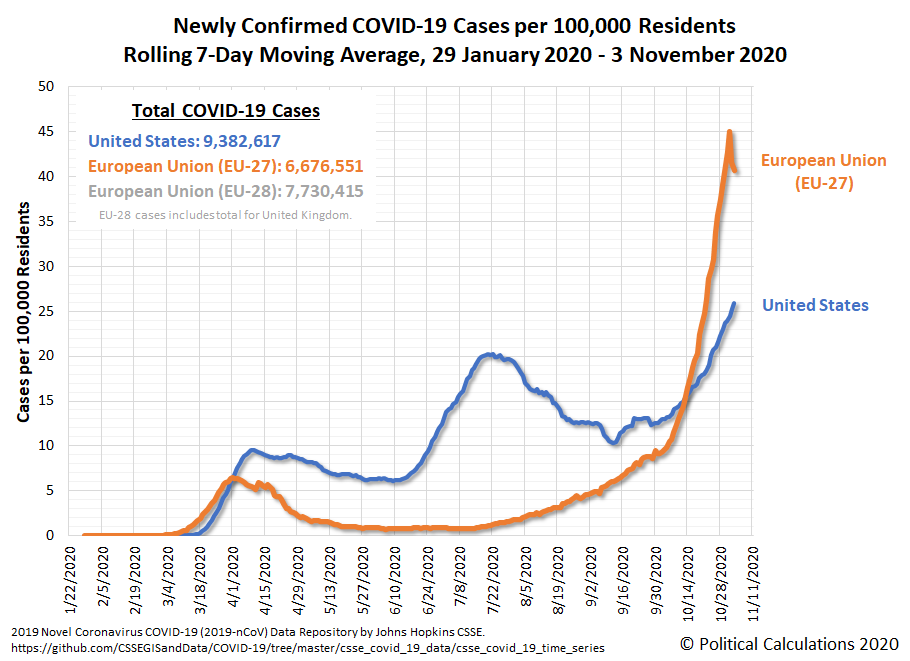 We've added some bonus information to this chart, indicating the total number of confirmed COVID-19 cases for each region from 22 January 2020 through 3 November 2020. We've also indicated the total for the EU-28, which would include the United Kingdom's figures in the total for the European Union. Here, although the UK officially exited the EU on 31 January 2020, it is still transitioning out of the union, and obviously is still very much part of the region.

But, even with adding the U.K.'s cases to the EU-27's total, the resulting 7-day moving average for the EU-28 isn't much different from that of the EU-27. So much so that we're only showing the EU-27 curve in the chart.

The trend for deaths in both the U.S. and the EU-27 follows the general pattern for cases, but with some very significant differences, which are illustrated in the next chart tracking the 7-day moving averages of COVID-19 deaths in the United States and the European Union. 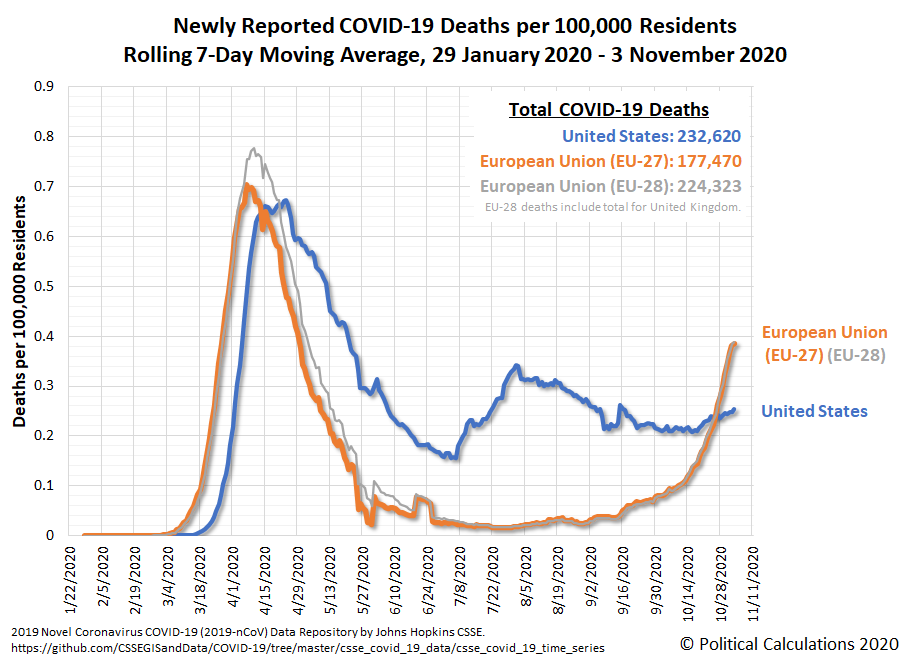 As with the COVID-19 cases chart, we're showing the total deaths for the U.S., the EU-27, and the EU-28 (including the U.K.'s COVID-19 deaths). Here, because it's significantly different in the period of the EU's 'first wave', we've included the 7-day moving average for the EU-28, even though it is essentially identical to the EU-27's data from July onward.

There are two surprises here. First, even though the U.S. has been experiencing an upswing in its incidence of cases since mid-September 2020, its incidence of deaths per 100,000 has not mirrored that increase as might be expected. That's not the case in the European Union, which has seen its COVID-19 deaths per 100,000 rise sharply within a short period after its 'second wave' increase in cases took place.

The second surprise is in comparing the total deaths between the U.S. and the EU-28. There is less than a 10,000 death difference between the two, despite the U.S. having recorded higher COVID-19 death rates per 100,000 than the EU from late April 2020 to nearly the end of October 2020.

The reason why this is the biggest story in the world is because of its sheer scale. The EU has a much larger population than the U.S., so having similar rates of COVID-19 deaths by itself would equate to a higher death total. Having a significantly higher rate of COVID-19 deaths per 100,000, as it already does, means that the EU-28 will surpass the U.S. total in the very near future, and the EU-27 will surpass the U.S. not long after if that state of affairs continues.

Seeking to get control over its latest coronavirus outbreak will also carry a large toll. That toll extends beyond life and death to its residents' livelihoods, where the EU's nations' response to its surging COVID-19 cases will have a global impact. The new lockdowns in the EU aimed at slowing the spread of COVID-19 to levels its member nations' health care systems can handle will come at a great cost to us all.

On the U.S. side, the question is whether individual states will be able to avoid following suit to cope with its latest regional wave. So no matter what the outcomes are for the elections in the U.S., the biggest story in the world continues to be the coronavirus pandemic.