Can you use Benford's Law to reliably detect election fraud? 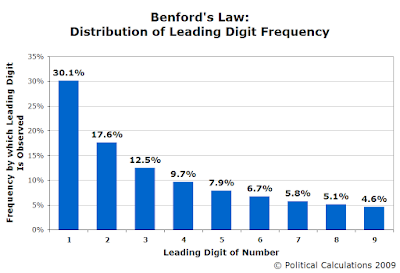 This question has been raised often since the U.S. elections on 3 November 2020. The earliest mention of it we can find where it was used to question results in this election dates to 6 November 2020, at this Twitter thread, which featured this infographic looking at the city of Milwaukee's election results in the U.S. presidential race. That was followed by tweets looking at vote tallies in Michigan, Chicago, Allegheny County (Pittsburgh), and other cities and states with long reputations for election irregularities.

Much of the analysis behind these posts appears to have originated with Rajat Gupta's DIY Election Fraud Analysis Using Benford's Law tutorial from September 2020, which provides a guide for how to apply Benford's Law to evaluate election results using spreadsheet applications like Microsoft Excel.

As such tutorials go, it is relatively well done, providing step by step instructions that anyone with basic spreadsheet programming experience can follow to conduct their own analysis to see if their dataset of interest follows Benford's Law and generate a chart showing the outcome. But the tutorial has a huge problem, in that it skips over a huge factor that determines whether Benford's Law can even be successfully applied to evaluate whether the data represents the results of a natural outcome or has potentially been artificially manipulated.

But when you look at the precinct voting data covering the geographies in question, it most often covers data that predominantly falls within a single order of magnitude. This limitation makes Benford's Law an unreliable indicator for detecting potential fraud in this application.

Matt Parker, avid student of math gone wrong and currently the #1 best selling author in Amazon's Mathematics History subcategory, has put together the following video to explain why Benford's Law doesn't work well under these limiting circumstances. It is well worth the 18 minute investment of time to understand where Benford's Law can be successfully applied to detect potential fraud and where it cannot.

Benford's Law has recently been more successfully applied to challenge the validity of the number of coronavirus infections being reported by several nations. The difference in determining its success comes down to the virus' exponential rate of spread, which quickly generates an escalating number of cases that satisfies the requirement that the range of values subjected to analysis using Benford's Law span several orders of magnitude.

With that condition unmet for the raised election examples, we find that using Benford's Law to detect potential voter fraud is unreliable. If the authors of the analyses identifying voter fraud were aware of the deficiency of data used to support their findings, we would categorize these results as the product of junk science. We don't however think that harsh assessment applies for these cases, as most seem to be following an otherwise useful guide that omits presenting the conditions that must be satisfied to properly apply Benford's Law. That makes this situation different from other examples of junk science where the offenders clearly knew their data's deficiencies and failed to disclose them, sometimes with catastrophic effect.

We'll close by providing a short guide to our work covering related aspects of the topics we've discussed and pointing to academic work that provides more background.