The size distribution of cities in the United States is startlingly well described by a simpler power law: the number of cities whose population exceeds S is proportional to 1/S. This simple regularity is puzzling; even more puzzling is the fact that it has apparently remained true for at least the past century. Standard models of urban systems offer no explanation of the power law. A random growth model proposed by Herbert Simon 40 years ago is the best try to date — but while it can explain a power law, it cannot reproduce one with the right exponent. At this point we are in the frustrating position of having a striking empirical regularity with no good theory to account for it.

The "simpler power law" to which Krugman refers is Zipf's Law, which was originally developed to describe a power law relationship that was found to exist between the rank of a word and how often it appears in use in language. A similar pattern was observed in the ranking and relative size of cities by population in the U.S., which was described by Xavier Gabaix in a much-cited 1999 paper.

But that exercise was largely based on comparing the relative ranks and populations of cities at a given snapshot in time. Does a similar pattern hold as cities evolve over time?

The answer to that question is "sort of, but not really". If Zipf's Law worked reliably, it could be use to accurately forecast the growth of population in cities over time. It can in a limited sense, but only to the extent that the growth over time is steady and not subject to chaotic conditions.

That's where a new study by physicists Vincent Verbavatz and Marc Barthelemy makes a potentially significant advance in modeling the growth of cities over time. Here's the abstract from their paper (boldface emphasis ours):

The science of cities seeks to understand and explain regularities observed in the world’s major urban systems. Modelling the population evolution of cities is at the core of this science and of all urban studies. Quantitatively, the most fundamental problem is to understand the hierarchical organization of city population and the statistical occurrence of megacities. This was first thought to be described by a universal principle known as Zipf’s law; however, the validity of this model has been challenged by recent empirical studies. A theoretical model must also be able to explain the relatively frequent rises and falls of cities and civilizations, but despite many attempts these fundamental questions have not yet been satisfactorily answered. Here we introduce a stochastic equation for modelling population growth in cities, constructed from an empirical analysis of recent datasets (for Canada, France, the UK and the USA). This model reveals how rare, but large, interurban migratory shocks dominate city growth. This equation predicts a complex shape for the distribution of city populations and shows that, owing to finite-time effects, Zipf’s law does not hold in general, implying a more complex organization of cities. It also predicts the existence of multiple temporal variations in the city hierarchy, in agreement with observations. Our result underlines the importance of rare events in the evolution of complex systems and, at a more practical level, in urban planning.

Verbavatz and Barthelemy find changes in migration flows to be especially significant in their new formulation, where they find a Lévy stable law provides a much better fit with empirical data from France, Canada, the United Kingdom, and the United States. The following figure from the paper illustrates these differences with results that would be expected from Gaussian-based models of growth (based on normal distributions of migration flows): 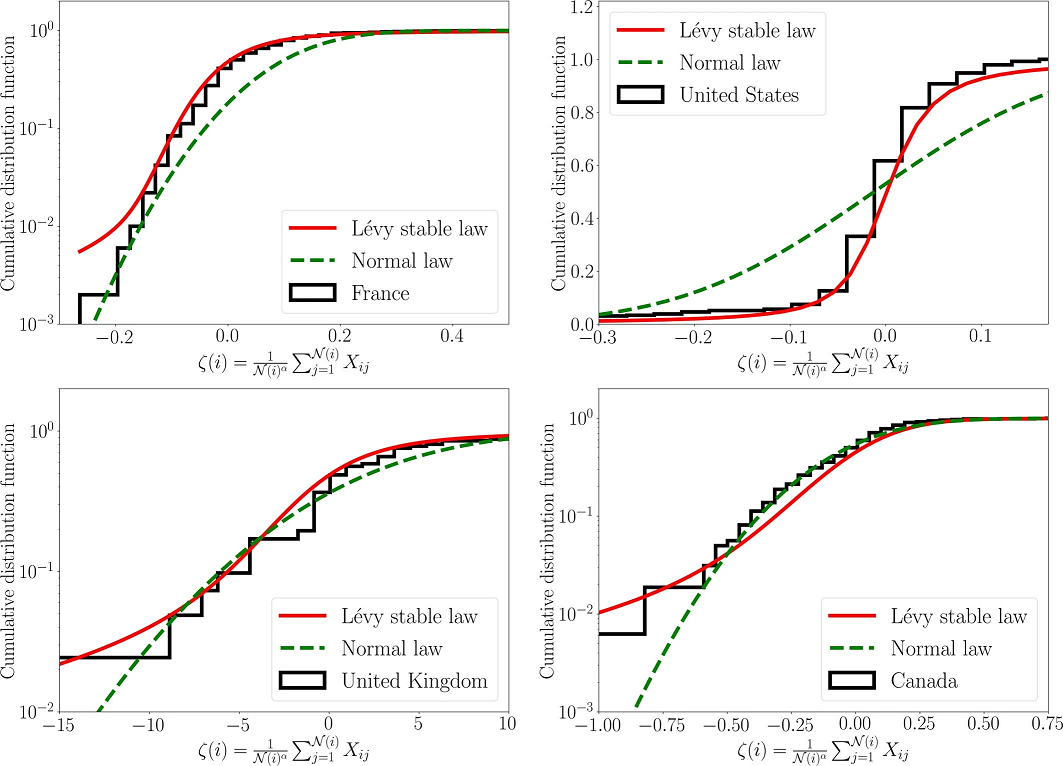 They also note that the Zipf-Gabaix-Gibrat model is not capable of accounting for scenarios where a city's population rank might significantly change within a short period of time. By contrast, their new model can accommodate these kinds of rapid transitions with reasonable accuracy, predicting how a city's population might change in response to shock changes in migration flows.

That's significant because 2020 is providing several potential case studies for the Verbavatz-Barthelemy model, in the form of the rapid out-migrations of people and businesses from cities experiencing break downs in public order as a result of their implementation of progressive political policies, such as New York, San Francisco, and Portland. These are examples of the kinds of turbulent shocks that Zipf's Law cannot handle but which the new general model for population growth in cities would appear to be well suited.