I guess there is some good news in it but the attack on casual work is an old push that does not deserve to get up. The labour laws about unfair dismissals and other things are onerous enough to cause many small employers to avoid hiring like the plague. They want to create jobs but risk a lot in doing so

Casual work is however not nearly so rule-bound so many employers hire casuals only. The employer gets a worker and the employee gets a job.

Any restrictions on that can only have adverse consequences. Employers will often fire a perfectly good casual worker just before the end of the period allowed for casual work -- thus inconveniencing everyone -- all because of government imposed rigidities

Casual workers will be the big winners when proposed workplace reforms are introduced in federal parliament this week, but the changes could have big impacts for small businesses.

Staff who have been with the same employer for a year and in regular shifts for six months must be offered a permanent position under the reforms.

More than half of Australia's 2.6 million casual workers will benefit from this change, but it could see less flexibility for small business owners forced to give out permanent contracts.

This means workers will have more job security.

'With so many Australians still out of work, or doing fewer hours as a result of the pandemic, we cannot do nothing when we have a situation where employers are delaying making hiring decisions ­because of ongoing confusion about the legal status of casual employment,' Mr Porter said.

He thanked employer groups and unions that helped to shape the reforms.

The legislation will introduce the statutory definition of a casual employment in the Fair Work Act, which will include employment being offered without any firm advance commitment that the work will continue indefinitely and follow an agreed pattern of work.

'Our definition of casual employment is likely broader than some business groups had wanted,' Mr Porter said.

'Unions are likely to say we should have made the definition broader still, suggesting to me that we have struck the right balance on this issue and delivered a fair and equitable outcome that will benefit both workers and employers.'

The legislation aims to address the so-called 'double-dipping' issue where employers currently may have to pay both for sick leave and other leave as well as the 25 per cent casual loading meant to compensate for those benefits.

The government will ensure employers do not have to pay worker entitlements twice by ensuring that a court deducts any identifiable casual loading paid to compensate the employee for the absence of one or more entitlements.

'These are significant reforms which together will solve the problem of uncertainty, provide better avenues for job security, remove the burden of double dipping claims and recognise employee choice.' Mr Porter said.

Pauline Hanson has declared people on welfare have “lost their rights” in a furious speech where she also attacked the fact an "Aboriginal" senator [Thorpe] had “a white father.”

Speaking in support of the cashless debit card that critics have dubbed as “racist”, the One Nation leader shocked the chamber on Wednesday by declaring anyone relying on welfare had forfeited their right to decide how they spend the money.

The card links 80 per cent of welfare payments to a cashless card to stop the purchase of drugs, alcohol and pornography.

“That’s what this card is about. It’s not about a person’s rights,’’ Senator Hanson said.

“When you go onto this card, you basically lose your rights as well. If you go on a welfare system, you’ve lost your rights.”

The Morrison Government’s hope to enshrine the cashless welfare card as a permanent feature appeared in strife last night after Senator Rex Patrick announced he would oppose the legislation.

But it was quickly revived via Centre Alliance’s Stirling Griff who indicated he would back amendments to extend it for two years.

Senator Hanson said there had been many positive effects that flowed from the cashless welfare card, that restricts welfare recipients from spending cash on drugs, alcohol and pornography.

“There have been increased purchases of baby items, food, clothing, shoes, toys and other goods for children,’’ she said.

“That’s why they are quite happy to be on the card. They can say: ‘I can’t give you money. I haven’t got it.’ Humbugging [begging] is in these communities. They know that family members are taking money from them.”

However, the One Nation leader then turned her sights on the Greens Senator Lidia Thorpe who has described the card as “racist.”

“I can’t let go what Senator Thorpe said earlier in this chamber. She commented that it’s her land,’’ Senator Hanson said.

“Senator Thorpe talks about her land. What about the white part? Where’s her white father in all of this, who I should say is a member of the One Nation party?.” 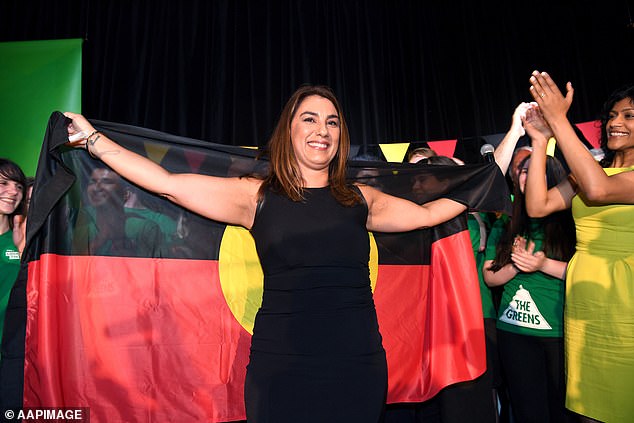 An independent review commissioned by the ABC has found the broadcaster 'favoured Labor' and lacked conservative voices in some of its coverage leading up to the 2019 federal election.

The report, tabled to parliament on Thursday, acknowledged 'potential problems of imbalance' on some panel shows, but found the ABC's news coverage 'consistently reflected a diversity of perspectives and covered a broad range of policy and campaign issues'.

The ABC had attempted to stop the report from being released but was forced to turn over the document as part of a Senate order.

An independent review commissioned by the ABC has found the broadcaster 'favoured Labor' and lacked conservative voices.

Renowned British journalist Kerry Blackburn was tasked with analysing five episodes of The Drum, four editions Insiders as well as a host of digital articles, radio segments and news broadcasts.

'Prominent conservative voices in Australia have argued that the ABC is left-leaning in its news and current affairs output,' the ITN, BBC and Channel Five veteran said.

'At first analysis, the review identified potential problems of imbalance across some significant segments of ABC content: to borrow from Barnaby Joyce, "it was Labor, Labor, Labor".

'But that was hardly surprising given the slimness of the government’s policy package and its campaign focus of attacking Labor, contrasted with Labor’s significant raft of policy and spending promises.'

Three out of five episodes of the Drum were found to have 'predominance of views which favoured Labor and/or the ideas and policies most often associated with the Left of politics'.

Mr Blackburn said the weekly Insiders programs were found to have been 'conducted fairly' and to have covered an appropriate range of topics.

But one of the biggest criticisms of the tax-payer funded network was that a consensus had developed around the idea that Bill Shorten would be 'getting the keys to the Lodge' - even if nobody came right out and said so.

'Many news stories on the ABC, and elsewhere, started from an assumption that Labor would shortly be in government; there was no other explanation for some of the angles taken,' Blackburn said.

The reviewer even noted two presenter slips which referred to Bill Shorten as the Prime Minister - only one was corrected.

When the election was done and dusted, the Coalition had won in a landslide taking most political commentators on the ABC and other networks by surprise.

Mr Blackburn's review recommends that 'more conservative voices and perspectives should have been included'.

But while Blackburn found faults with some of the coverage he said there was no evidence of bias at the Australian broadcaster.

'ABC content for the most part followed the weight of evidence and was duly impartial. The finding overall is that the content met the impartiality standard,' he said.

In a statement posted to the broadcaster's website, the ABC said it regularly commissions editorial reviews in order to get independent external feedback.

'The ABC takes seriously our editorial standards and statutory responsibilities and knows that as the public broadcaster we are held to a higher standard,' the statement said.

'ABC journalists and presenters were shown to have been fair and accurate in their writing, interviewing and presenting.

'This aligns with analysis of the Share of Voice data and the ABC's own internal monitoring of interviews of politicians, which showed the ABC was meticulous in ensuring that the competing parties were consistently treated in a fair and balanced manner.'

The release of the independent report comes after the minister for communications, Paul Fletcher, wrote to the ABC chair, Ita Buttrose, accusing the broadcaster's flagship program Four Corners of inappropriate reporting.

The Morrison government had been left reeling last month after allegations of bad behaviour and extramarital affairs with female staffers were levelled at two senior liberal MPs - Alan Tudge and Christian Porter.

ABC journalist Louise Milligan faced a backlash from the government and some section of the community claiming her investigative report into the private lives of politicians went too far.

After the fallout from the program, extra scrutiny has been placed on the ABC.

Ms Buttrose and the managing director of the broadcaster, David Anderson, expressed their strong objection to the internal review being made public.

In a letter to president of the Senate, Scott Ryan, they wrote the release would hinder the 'free exchange of ideas'.

'There is a public interest in the ABC being able to deliberate on and develop ideas for its program material in a confidential way,' Buttrose wrote to Ryan on Thursday, the Guardian reported.

'Public discussion on its internal deliberations on program material will hinder the free exchange of ideas about program material, and this is to the detriment of the public interest.'