The media are quick to call admirable people Aborigines even when they are to all appearances white. So how come the guy below was not identified as an Aborigine? He is in fact a fairly typical urban Aborigine. Urban Aborigines do typically have some white ancestry.

The Left-led media try their best to create a picture that it the opposite of reality. One wonders if that does any of the good that is presunmably intended. Can any good come from a blatant lie? 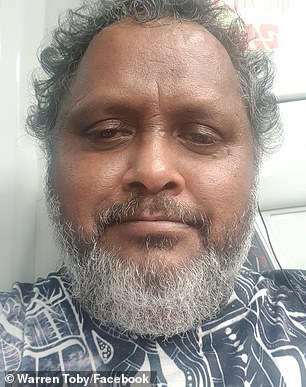 A man has been charged with murder after allegedly stabbing his girlfriend's father to death in front of his family on Christmas Eve.

Garth Michael Reid is accused of killing Warren Toby, 53, just before midnight on Friday in the front garden of a home in North Ipswich, south-west of Brisbane.

The 33-year-old allegedly used a 'sharp implement' to stab the man multiple times as horrified family members watched on.

Police said the group were drinking before an argument broke out and spilled onto the street.

Paramedics desperately tried to resuscitate Mr Toby but he could not be revived.

Reid, who was in a relationship with the alleged victim's 30-year-old daughter, was arrested at 5pm the following day at his home in Woodgate.

He was charged with murder, assault occasioning actual bodily harm and wilful damage.

Reid did not apply for bail and will appear in Ipswich Magistrates Court on February 3. 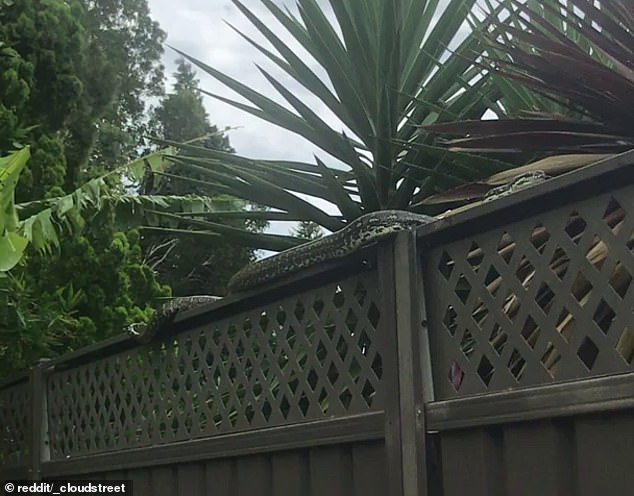 No big deal. I found one inside my house a month ago

The five-foot-long carpet python was spotted enjoying the sunshine in the backyard of a home in Newcastle, New South Wales this week.

The homeowner recorded the moment he stumbled upon the giant serpent and posted the footage to Reddit. 'Yep, Aussie summer is in full swing,' the caption read.

Professor Patrick McGorry, a leading psychiatrist in youth mental health and 2010 Australian of the Year, is among those calling for more support to be offered to travellers in hotel quarantine.

Among Professor McGorry's suggestions is to radically change the hotel quarantine system by moving it away from CBD hotels.

"It might be convenient because these hotels are empty but in the past, quarantine stations were placed remote from major population centres," he said.

"Prior to the 1950s, tuberculosis sanatoria were often placed in quite pleasant rural surroundings so you did have space, you did actually have rest and a sort of sense of calm and serenity.

"I don't know if enough thought's gone into that on this occasion."

Professor McGorry said the change would be beneficial for more than just those in quarantine.

"If there is a leakage or there are incidents or spread [of the virus] out of the quarantine location, if it's a more isolated setting or a smaller population base … the risk to the general public surely would be a lot less," he said.

Opposition spokesman Tony Krsticevic said the Liberal Party was calling for an independent inquiry into the state's preparedness to deal with the coronavirus.

He said a key consideration should be alternative forms of quarantine, including facilities in rural areas or hotels with balconies.

"We know that when people go into quarantine, into lockdown, some of them are going to struggle and we need to understand the experiences that they're going through," Mr Krsticevic said on Monday. "We should have alternatives for those who can't cope and for those who have mental health issues."

"Through the health and wellbeing teams and a very dedicated mental health team for those with more serious mental health issues, we've been able to support more than 20,000 international travellers safely through hotel quarantine to return to their families and friends," she said.

Australian Medical Association (AMA) WA President Andrew Miller echoed calls for the system to be overhauled, saying it was "critical to our future success in 2021". "You can't just assume [people are] going to be OK if you stick them in a hotel room and ask them to stay there," he said.

Allowing for fresh air or trips outside were at the top of his wishlist, but Dr Miller said abandoning hotel quarantine entirely should be considered for some international arrivals.

"There may well be situations in which it's entirely appropriate for international arrivals to be … looked after at home or at another residence away from hotel quarantine."

Divorce courts are clogged with a year-long backlog of cases, as highly-paid judges enjoy up to 10 weeks’ holidays while postponing court hearings until 2022.

One Nation senator Pauline Hanson demanded that judges be stripped of their generous perks, with holidays cut back to the four or five weeks a year granted to ordinary Australian workers.

“The courts are overworked and have got a backlog of 20,000 cases,’’ she told News Corp Australia. “Cases are taking months, if not a couple of years, to be heard.

“Judges’ entitlements are excessive and I don’t think judges should be appointed for life or ‘til they’re 70. “They get burnt out, and close to retirement they go on stress leave and sick leave.’’

Senator Hanson is deputy chair of a federal parliamentary inquiry into family law, which has revealed that some children have been caught in seven-year custody battles.

Divorce disputes are heard in two courts – the Family Court, which fielded a five-year high of 21,054 applications in 2019/2020, or the Federal Circuit Court (FCC), which received 85,563 family law cases, including 45,886 divorce applications the same year.

The 33 Family Court judges, who hear the most complex disputes, are paid a base salary of $468,020 plus 15 per cent superannuation and a car allowance – with eight weeks’ holidays.

The 68 FCC judges are paid $394,980 plus superannuation and a car allowance, with six weeks’ holidays and the ability to “purchase’’ a bonus four weeks’ leave through salary sacrifice – giving them up to 10 weeks’ holiday each year.

Judicial salaries were frozen this year after the Remuneration Tribunal knocked back a pay rise due to the COVID-19 recession.

Law Council of Australia president Pauline Wright yesterday warned that some separated couples were waiting three years for a judgment.

She said the Family Court had a backlog of at least a year’s worth of cases.

Ms Wright said some hearings scheduled for 2020 had been cancelled by email and postponed due to the pandemic – with some final hearing dates set for 2022 at the earliest.

“Even before COVID-19, some families were having to wait up to three years, some longer, to have their matters resolved,’’ Ms Wright said.

“The sheer workload, coupled with too few judges to carry it out, is creating delays, leaving families and children in limbo and often at risk while waiting for their matter to be heard.’’

Internal court data provided to the parliamentary inquiry last month reveals that two out of three FCC judges are juggling more than 300 matters on their dockets.

In regional courts, some judges were hearing 60 cases a day.

The Family Court has a backlog of 6720 cases – including 2586 lodged more than a year ago, and 1508 cases at least two years old, the latest Productivity Commission data reveals.

Its judges have been swamped with immigration cases since COVID-19 border closures this year.

The inquiry’s chairman, Kevin Andrews, said the most pressing issues raised by evidence to the inquiry were “the cost of family law proceedings, the delays in the system, and the seeming unenforceabilty of orders.”

Federal Attorney-General Christian Porter yesterday vowed to press ahead with plans to merge the two courts next year.

“This is an area in need of urgent reform to improve the system for all those involved, most especially for families who should be able to rely on the courts to help them resolve matters at the end of a relationship as quickly, efficiently and at as low cost as possible,’’ he said.

Ms Wright said lawyers opposed the merger and wanted a stand-alone federal law court instead, with more specialised judges to fast-track cases and extra training to deal with cases of domestic violence.

Mr Porter said the Morrison government would spend $140 million on family law over the next four years, including funding for another judge, five more registrars and extra support staff for courts.

“There is little point in pushing more funding into a failed structure and additional funding needs to attach to structural reform of the courts,’’ he said.

Saving for your retirement is a mug's game now

The pandemic recession will end up delivering savings worth tens of thousands of dollars to the nation's home buyers due to a collapse in mortgage interest rates, but will also cruel the savings plans of millions more.

Data compiled by Canstar reveals the extent of the drop in mortgage rates through 2020 that will deliver ongoing benefits to those buying new or refinancing their existing home loan.

The Reserve Bank has signalled it is not expecting to increase official interest for at least 3 years.

Canstar group executive of financial services Steve Mickenbecker said bargain hunters with good credit levels had done exceptionally well, with the lowest rate in the market 1.77 per cent for a loan-to-value ratio of up to 60 per cent. "Home loan rate cuts have been one piece of good news for borrowers in 2020," he said.

There has been strong growth in fixed rate mortgages this year as buyers seek to lock-in record low rates. The average rate on a three-year fixed mortgage has fallen from 3.15 per cent to 2.3 per cent, a difference of $130 a month or more than $39,000 over the life of the loan. The best three-year fixed rate is 1.89 per cent, down from 2.69 per cent at the start of the year.

Low rates are expected to be the norm for coming years. The Reserve Bank has signalled it is not expecting to increase official interest for at least three years.

It's been a much tougher year, interest-wise, for people with money. As banks have cut their mortgage rates, they've also slashed their savings rates.

The average regular saving rate was 1.12 per cent at the start of the year but it is now just 0.43 per cent. For a person with $10,000 in their account, the drop in interest equates to a $740 in compound savings over a decade. The current inflation rate is 0.7 per cent, meaning a person holding cash is going backwards in real terms.

The average bonus savings rate, which are often introductory rates, have fallen from 1.47 per cent 0.75 per cent.

How Australia navigated an economic jolt not seen for a century
But high unemployment, the collapse in immigration numbers and weak rental markets were weighing on inner city areas and units in Sydney and Melbourne.

Those with money were likely to be disappointed with their savings performances. "Cash and bank deposits are likely to provide very poor returns, given the ultra-low cash rate of just 0.1 per cent," he said.