In previous posts, I covered Covid-19 updates for the last week of 2020 for: 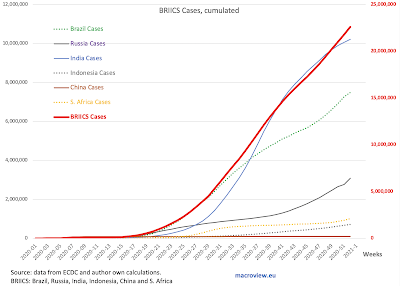 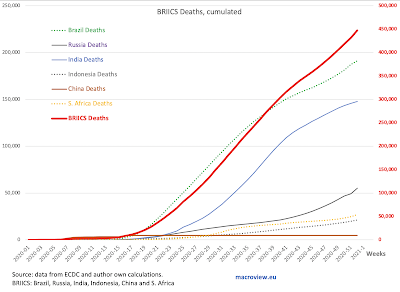 Most current summary of key stats is below:

Now, to dynamics and trends.

BRIICS weekly case numbers are on the sustained rise, once again, since the trough achieved in week 45 which marked the end of the Wave 1 and the start of Wave 2 of the pandemic: 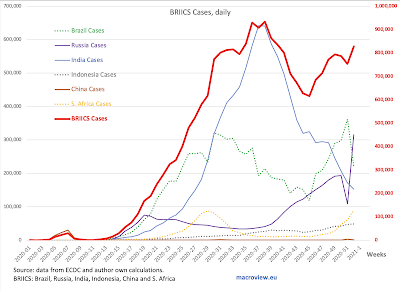 India and Brazil are showing robust and weakly-robust declines in weekly cases, while Russia and South Africa are showing robust increases. Other BRIICS are on a weak upward trend. Put frankly, my expectation is for a rise in India cases in weeks ahead as the new wave of the pandemic starts to take hold. Brazil being in a summer season is likely to have a longer lead time into the new wave.

Rather similar dynamics are taking place in deaths counts: 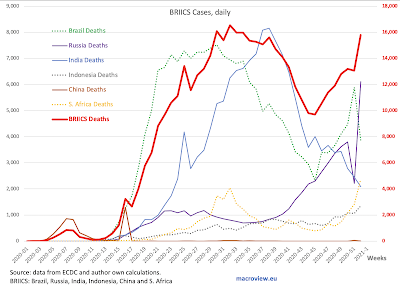 One key feature of the data is, of course, the clearly unreliable data from China that skews overall picture for the BRIICS group as a whole. If China's data was running at 0.75-0.9 of the average BRIICS rates, the country would have reported over 9.26 million cases (as opposed to the officially-reported 96,292 cases) and 183,400 deaths (compared to the officially-reported 4,771 deaths). It is worth noting here that these estimates reflect BRIICS rates that include official China statistics (downward bias to the estimates). What is quite amazing is not the actual numbers themselves, but the nearly total silence on the state of the Chinese statistics in much of the Western media, despite the order of differences between China and other BRIICS. Take a look at the comparative table here:

Russian stats: scrutinized left, right and center on every op-ed and news page of all major media outlets in the West are pretty much bank-on as expected: worse than average in infection rates, worse than average in deaths per capita, roughly (statistically) below average in terms of mortality rate. Similar for India. China's data is a complete and total outlier, and yet not a peep from the mainstream news.