In 2010, U.S. compensation and data software firm Payscale identified the 10 lowest paying college degrees for those starting their first jobs in their fields after graduation. We wondered how on the mark that list was, so we tapped Payscale's 2020 data for starting wages by college major to see if things got relatively better or worse for today's graduates in those fields.

The results are shown in the following chart. The original 2010 data is shown in blue and the newer 2020 data is shown in green. In between, in orange, we've adjusted the 2010 starting salary data for inflation to be in terms of 2020 U.S. dollars to make those older salaries directly comparable to the actual starting pay for graduates in the listed fields in 2020. 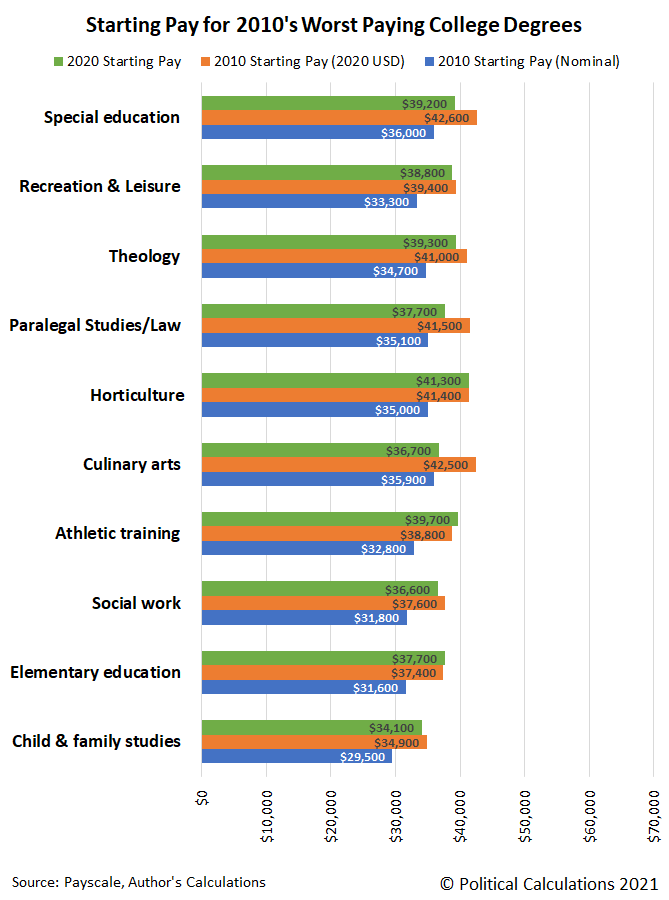 After adjusting for inflation, we see only two degrees where the actual starting pay for graduates in 2020 is ahead of 2010's inflation-adjusted level: Athletic Training and Elementary Education. Horticulture comes close to breaking even, so to speak, and the remaining fields would appear to have become even less rewarding.

In 2010, Payscale also indicated what an individual holding these degrees could expect to make at a mid-career point, some 10 or more years after graduation. Since it's 10 years later, we thought it would be especially interesting to see how 2020's actual mid-career pay compares with 2010's inflation-adjusted mid-career pay. Our results are shown in the next chart: 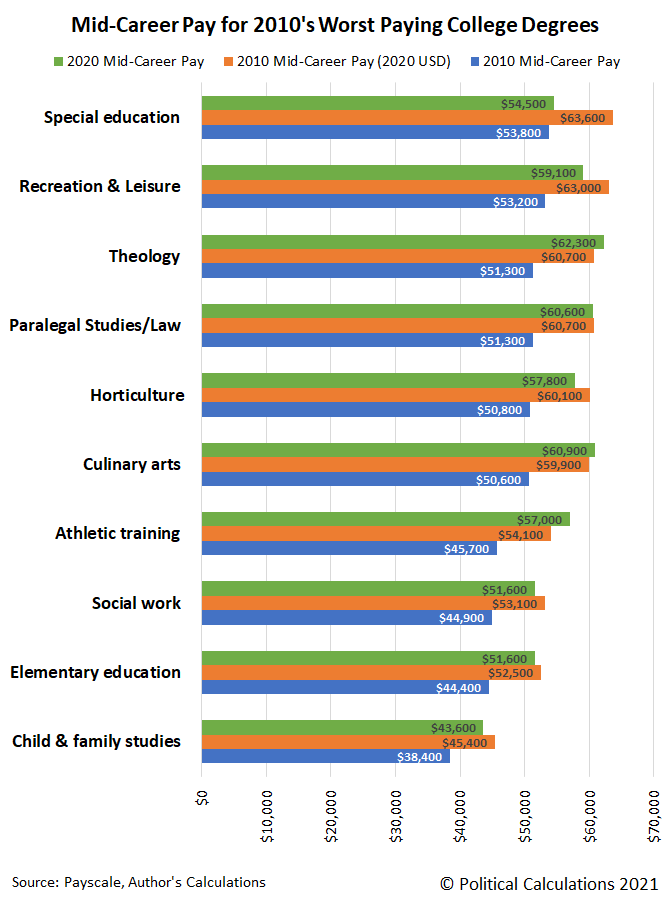 Once again, the fields of Culinary Arts and Athletic Training come out the furthest ahead after accounting for inflation, but Theology graduates also gained more income than would have been expected based on 2010's inflation-adjusted pay.

Most the other fields saw their 2010 graduates making something within a several percent of their 2010 peers' inflation adjusted pay, with one big exception, which looks like it is in error.

According to Payscale's 2020 survey data, individuals holding degrees in Special Education with 10 or more years of experience saw the average mid-career pay in their field collapse. At $54,500, it is just $700 higher than 2010's non-inflation adjusted pay, some $9,800 below what adjusting the mid-career income for 2010 would predict.

The Bureau of Labor Statistics indicates the median pay for Special Education teachers was $61,420 per year in 2019, which is more in line with Payscale's 2010 inflation-adjusted mid-career income figure.

We sampled other income data for other fields, which appears to be in line with Payscale's surveyed reults, so the 2020 mid-career pay figure for Special Education degree holders appears to be an outlier.

Overall, it appears most of 2010's lowest paying degrees for college graduates turned out to be as bad for pay 10 years later as 2010's data suggested they would be.