The rollercoaster ride of the S&P 500 (Index: SPX) continued last week. The index even briefly dipped below our redzone forecast range during the week, before rallying to return to its projected trajectory. 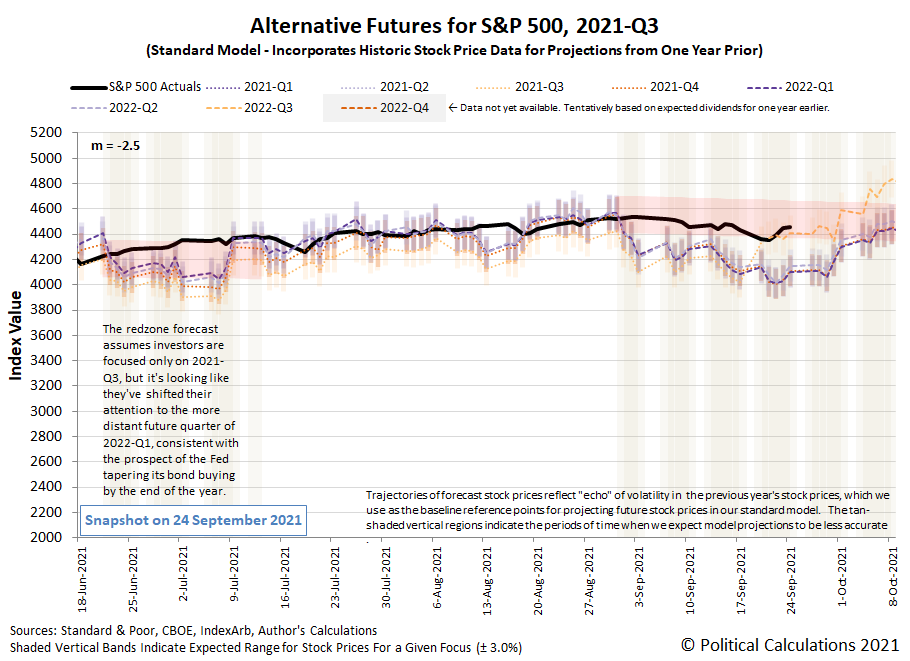 Most of the market's action during the week was driven by speculation over when the Federal Reserve would commit to begin slowing down the rate at which it has been buying U.S. government-issued securities to stimulate the economy. When all was said and done after the conclusion of the Federal Open Market Committee's two day meeting on Wednesday, 22 September 2021, the Fed indicated they would follow the plan to taper they've been signaling to investors for months, even though the specific timing has yet to be announced.

With those expectations mostly set, investors have focused on 2021-Q4, which puts the S&P 500 back into the redzone forecast's defined range. The redzone forecast range is based on our assumption investors would mostly focus on 2022-Q1 well into December 2021, which produces a forecast range that is slightly higher than a similar forecast based on investors focusing on 2021-Q4 would be. These two ranges however have considerable overlap because of the small difference in expectations for changes in the year over year growth rate of dividends between these two future quarters. For now, we'll recognize that overlap exists in the form of the actual trajectory of the S&P 500 running mostly in the lower portion of the forecast range shown on the alternative futures chart.

That's not to say investors won't shift their forward-looking attention to some other point of time in the future if prompted by new information. Nor is it to say the expectations for dividends expected at different points of time in the future won't change. As we've seen before, changes for either of these things impact the trajectory of stock prices.

Meanwhile, the market moving headlines for the week that was point to the outized role of the Fed in shaping future expections, although the developing failure of China's Evergrande group and its potential impact on the Chinese economy and what that would mean for the global economy contributed to the dip in stock prices during the week.

Last week, we pointed to the U.S. Treasury's yield curve rates as our ongoing feature pointing to useful investing information sites, but what about other interest rates? For ones that affect personal finance (autos, credit cards, homeowners' equity, etc.), we often turn to Bankrate for its exhaustive listing of currently available loan interest rates. As a bonus, the site also features a lot of useful tools.