Judging by the surname, they are Lebanese Muslims. Such people often have big egos and react childishly in response to perceived slights

A cruise ship brawl that ended with more than a dozen family members booted off the vessel was sparked after one of them stepped on a passenger's shoe, court documents allege.

The Zakhour family and some of their friends were escorted off the Carnival Legend after it was forced to stop at port in Eden, New South Wales, on February 16, 2018.

Shocking footage captured a group of passengers engaged in a bloody fist fight before security were forced to intervene and detain the family as the ship docked.

Three members of the Zakhour family are now suing cruise company PLC claiming security violently assaulted them before falsely imprisoning them onboard.

Carnival PLC has filed a defence at the County Court drawing up a list of allegations against the family.

They allege members hurled racist abuse at security, lashed out at staff when their supply to booze was cut off, and sparked a brawl with other passengers, Herald Sun reported.

PLC alleges the son of Zaki Zakhour, 52, stepped on a passenger's shoe two days before the brawl broke out.

Mr Zakhour then became engaged in a heated argument with the passenger before assaulting them the following day, court documents allege.

PLC alleges Mr Zakhour grabbed the passenger by the throat while other family members threatened to kill him.

Mr Zakhour said in his statement of claim that when security intervened he was punched in the head and kicked on the ground.

He alleges the chief of security yelled at him: 'I'm going to f***ing kill you and your son'.

PLC has defended the actions of the security staff saying Mr Zakhour and his son were handcuffed before they were taken to separate rooms.

Staff had been acting under the orders of the captain and employed 'a reasonable use of force' to ensure the safety of its other passengers, PLC claimed.

The cruise line company claims the Zakhour family and their friends were involved in several incidents in while on the cruise ship.

They allegedly took out their anger at staff when their booze privileges were revoked and pushed a bouncer after they were refused entry into a nightclub.

PLC claims members threatened passengers near a pizzeria and choked a security guard and told staff to 'be ready for a wrestle'.

The matter will go to trial next year.

Climate weed sentenced to 12 months in prison over Newcastle protest 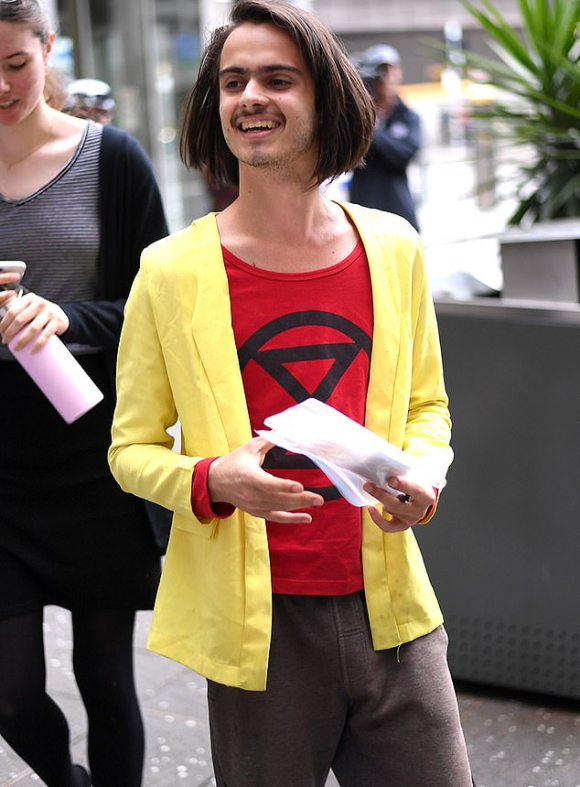 A climate activist involved in protests that disrupted the Hunter region's rail network for two weeks has been sentenced to a year in prison.

Eric Serge Herbert was sentenced in Newcastle Local Court to 12 months' imprisonment with a non-parole period of six months.

A police strike force was established last week in response to the ongoing protest action, which impacted coal, grain and passenger trains trying to access the Port of Newcastle.

The NSW Police Commissioner Mick Fuller delivered a stern warning to protesters, announcing that the continued behaviour could result in charges laid under the Criminal Act that carry a maximum penalty of 25 years in prison.

The ABC approached Police Commissioner Mick Fuller to comment on the sentence but he was unavailable.

Group says it's a 'matter of concern'

Climate activist group Blockade Australia held a press conference in Newcastle this morning, describing the police action to stop the ongoing protests as "repression" and an "outrage".

One spokeswoman, 21 year old Hannah Doole, said she was "angry and scared on Sergio's behalf".

"This is a matter of concern for everybody that expresses dissent to the current political system and to politics in this country in whatever form.

"And they have just been sentenced to six months no parole. 12 months imprisonment is an outrage," she said.

Another Blockade Australia representative, 24 year old Jarrah Kershaw, said he did not believe protesters would be deterred.

"Last week, people were threatened with 25 years in jail. And for the next three days, people continued to take action despite that," he said.

A platoon accused by the ABC of murdering a “hog tied” Afghan prisoner says it had not conducted outside-the-wire operations for more than a month after the alleged execution incident took place, a new timeline reveals.

The timeline issued by the 2 Commando Regiment November Platoon former commander Major Heston Russell on behalf of the 30 members of his squad, came after the ABC again defended its report, issuing a lengthy brief to defend its accuracy.

According to the controversial ABC report, in mid-2012 the platoon had seven Afghan prisoners but when told there was room for only six on a US extraction helicopter, a US Marine heard a “pop” on his headphones and six prisoners were presented.

The ABC claimed the man was murdered by the platoon and no other military or law enforcement agency wanted to work with the platoon again.

But Mr Russell has maintained that not only did the incident not happen, there was no record of the prisoner extraction. He said the platoon had not actually made any outside-the-wire operations in Helmand Province for more than a month after the alleged incident took place and since it was Ramadan, all operations were restricted.

The issue is to be debated in the Senate on Tuesday as the deputy chair of the communications reference committee Senator Andrew Bragg pushes for an inquiry into the ABC complaints process based on the platoon and experiences of others.

Mr Russell said no-one had ever heard of the allegation which as far as he was aware was not part of the Brereton inquiry into alleged war crimes or any US, Australian or NATO complaint into operations.

Mr Russell – who said it had been a 13-month ordeal since the ABC aired its report and since refused to remove it from online – has presented a lengthy brief to the Senate communications inquiry which is considering a probe into how the ABC handles complaints about its reports and journalists.

Last Friday the ABC said it had lodged an FoI request seeking audio copies of mission communications and complaints specifically related to the November platoon in June and July 2012 when it says the alleged incident took place.

Defence turned the request down in a generic statement related to not releasing material that was subject to any probe.

“Incredibly, the ABC last week used the FOI response from Defence to claim there is a criminal investigation into their original story when Defence has said nothing of the sort,” he said.

“Defence simply confirmed what is already known; that they are co-operating with the Office of the Special Investigator set up by the Government to examine alleged crimes contained in the Brereton report and other sources.”

On Friday when specifically asked about November Platoon, the ABC issued a lengthy statement defending its journalists and reports which it said had been followed up by the Brereton inquiry into war crimes “and sparked a war crimes investigation by the AFP”.

There is no evidence the inquiry has extended to the November Platoon.

Low-emissions fuels for aircraft and cargo ships are targets of a new federal government initiative to harness organic waste for bioenergy, sparking calls for a ban on the use of native forest timber to fuel furnaces for power generation.

Bioenergy is produced from organic waste in forestry, agriculture, landfill or sewage and turned into energy in the form of heat, electricity, biogas and liquid fuels. It already generates about 50 per cent of the renewable energy consumed in Australia, largely through the burning of sugarcane waste, known as bagasse, to generate electricity to power sugar mills NSW and Queensland.

ARENA’s road map said if bioenergy achieved its growth potential, it could add $10 billion to gross domestic product by sometime in the 2030s and create 26,000 jobs while reducing emissions by nearly 10 per cent and using 6 per cent more landfill waste than it did now. The government’s green tech finance agency is responsible for supporting low-emissions technologies as the nation transitions to a net zero economy by 2050.

It said waste from the forestry sector, created during milling and harvesting, represented 22 per cent of the total resource potential available to the sector, raising fears among conservation groups that logging of native forests could be spurred by increased demand for organic waste for biofuels.

The Australian Forests and Climate Alliance’s submission to ARENA said whole logs could be “defined as ‘residue’ or ‘waste’, making this industry appear to simply be using leftovers” whereas a significant portion of a standing forest could be used for so-called waste recovery products such as woodchips or bioenergy.

Along with the Australian Conservation Foundation and the Wilderness Society, it has called for a ban on native forest timber being classified as renewable bioenergy.

But peak lobby group Australian Forest Products Association (AFPA) said timber products such as wood pellets, which are currently imported by Japan and the European Union, could make a significant contribution to Australia’s biofuel sector.

Carbon emissions from burning wood pellets were “captured by new plants as they regrow in a sustainable cycle”, its submission said.

Mr Taylor highlighted bioenergy’s “emissions reduction and economic opportunities”, which he said would be realised chiefly in regional communities surrounded by primary production.

Fuel producers and jetmakers are keen to showcase novel forms of aviation fuel deemed less harmful to the climate, from used cooking oil to the distinctly less glamorous meat waste.

ARENA selected aviation and shipping biofuel produced from food and agricultural waste as a near-term opportunity for clean energy.

International transport is a particularly difficult industry for emissions reductions, with scant alternatives to emissions-intensive fossil fuels. Aircraft and cargo ships could, potentially, be fuelled by zero-emissions hydrogen but this technology is further away from commercialisation.

ARENA said biofuels were more mature than other prospective clean aviation fuels, “with a growing number of pathways certified to industry standards, demonstration flights and fuel off-take agreements both in Australia and overseas”. Bioenergy could also be tapped to generate heat for industrial processes, gas to supply the electricity grid or fuel for road transport.

“The expected extremely low cost of wind and (solar) photovoltaics will likely out-compete most biomass options in the near future – decisions should be made with this fact in mind,” ANU’s submission said