We're once again approaching that time of year when children will soon be nestled all smug in their beds with the proverbial visions of sugar-plums dancing in their heads. When that happens, can a visit from St. Nicholas, a.k.a. "Santa Claus", be far behind?

And if so, what can you do to detect the right jolly old elf's presence if he's about to make an appearance by bounding down the chimney? With gift deliveries on hold until all household children comply with Christmas bed occupancy regulations, wouldn't it be a good idea to know when Santa has arrived so you know when you need to send them off to sleep?

That's where U.S. Patent 5,523,741 could be really helpful. Invented by Thomas Cane, the 1996 invention of the Santa Claus Detector was specifically developed to alert residents to the presence of St. Nicholas. Cane's innovation is to conceal a light source within a stocking that might be hung beside the chimney to signal the arrival of the "plump, white-bearded and red-suited gentleman" bearing gifts. He describes his sugar-plummy vision in the patent's section for the background of the invention, where he points out an obvious omission requiring a patented invention to resolve:

According to modern folklore, if a child has behaved during the previous year, Santa Claus will reward the child by placing one or more Christmas presents under the Christmas tree while the child is asleep. To prepare for the arrival of Santa Claus, most households recognizing the Christmas holidays will decorate and prominently display the Christmas tree and hang (or display) various decorations, including Christmas stockings. The stockings are hung by the fireplace (i.e., where Santa enters) and are also filled with small presents and/or treats by Santa upon his arrival.

It is therefore an object of the present invention to provide a children's device capable of providing selective illumination to signal the arrival of Santa Claus. This is particularly important to young children, providing reassurance that the child's good behavior has in fact been rewarded by Santa Claus.

Figure 1 of the patent illustrates how the invention might be cleverly incorporated into festive decorations beside the fireplace: 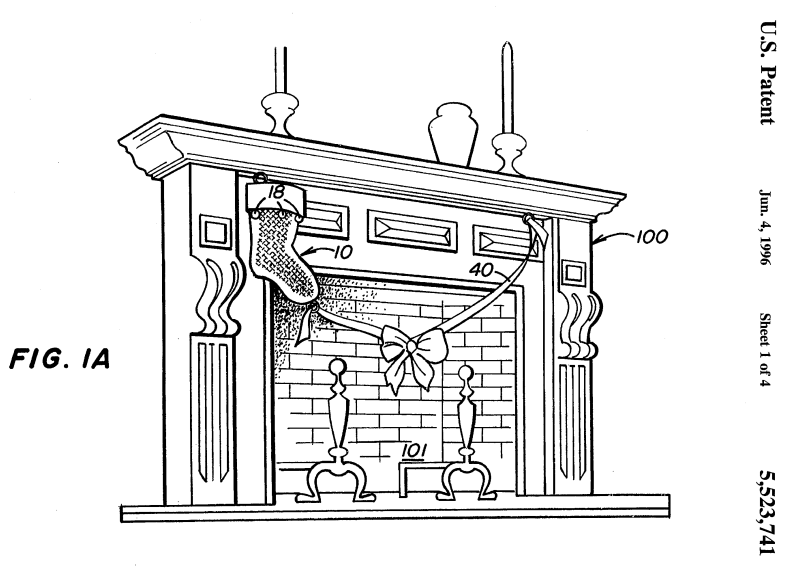 In the figure, the ribbon (40) is an elongated flexible pull cord that, when pulled, will activate the battery-powered light emitting diodes (18) and optional music generator (not shown, 50). This configuration allows parents to trigger the Santa Claus Detector when they are ready to clear the way for St. Nicholas by alerting children it is time to go to bed.

But as configured in the diagram, we can't help but note the configuration would also alert household residents should Santa Claus come bounding out of the fireplace without prior warning, where his movements would trigger the stocking LEDs and musical alert to activate. Even if sound asleep at and well through the time of activation, household residents would know that St. Nicholas had visited when they check the detector status.

With that all said, the Inventions in Everything team wishes you all a Merry Christmas and Happy New Year. This is our final edition of the year - we'll be back sometime in January 2022 with our next edition!

The IIE team has previously mined through the U.S. Patent Office's records to find out how Santa's sleigh has changed over time!