Artificial Intelligence is starting to make its mark on many fields, but the first that will face true transformation because of it is mathematics.

They named their innovative system after Srinivasa Ramanujan, an early 20th century self-taught mathematician from India who possessed an exceptionally rare talent for proposing viable mathematical conjectures. The AI-based system opens up the opportunity of mathematical discoveries to a much wider pool of talent:

The research study started out as an undergraduate project in the Rothschild Scholars Technion Program for Excellence with the participation of Gal Raayoni and George Pisha, and continued as part of the research projects conducted in the Andrew and Erna Viterbi Faculty of Electrical Engineering with the participation of Shahar Gottlieb, Yoav Harris, and Doron Haviv. This is also where the most significant breakthrough was made—by an algorithm developed by Shahar Gottlieb—which led to the article's publication in Nature. Prof. Kaminer adds that the most interesting mathematical discovery made by the Ramanujan Machine's algorithms to date relates to a new algebraic structure concealed within a Catalan constant.

The structure was discovered by high school student Yahel Manor, who participated in the project as part of the Alpha Program for science-oriented youth. Prof. Kaminer added that, "Industry colleagues Uri Mendlovic and Yaron Hadad also participated in the study, and contributed greatly to the mathematical and algorithmic concepts that form the foundation for the Ramanujan Machine. It is important to emphasize that the entire project was executed on a voluntary basis, received no funding, and participants joined the team out of pure scientific curiosity."

The Ramanujan Machine has also already made some other very noteworthy achievements:

The conjectures generated by the Technion's Ramanujan Machine have delivered new formulas for well-known mathematical constants such as pi, Euler's number (e), Apéry's constant (which is related to the Riemann zeta function), and the Catalan constant. Surprisingly, the algorithms developed by the Technion researchers succeeded not only in creating known formulas for these famous constants, but in discovering several conjectures that were heretofore unknown. The researchers estimate this algorithm will be able to significantly expedite the generation of mathematical conjectures on fundamental constants and help to identify new relationships between these constants.

As mentioned, until now, these conjectures were based on rare genius. This is why in hundreds of years of research, only a few dozens of formulas were found. It took the Technion's Ramanujan Machine just a few hours to discover all the formulas for pi discovered by Gauss, the "Prince of Mathematics," during a lifetime of work, along with dozens of new formulas that were unknown to Gauss.

Having developed the conjectures, the next step for mathematicians will be to transform them into full mathematical theorems with proofs.

But that's not the only AI-based math story to make the news this year!

Just last week, a different set of maths researchers at the University of Sydney announced they had developed an AI system to both generate and prove conjectures in representation theory and in knot theory. The following excerpt describes how the AI program known as DeepMind helped Geordie Williamson prove a 40-year old conjecture in his field of representation theory:

Professor Williamson used DeepMind's AI to bring him close to proving an old conjecture about Kazhdan-Lusztig polynomials, which has been unsolved for 40 years. The conjectures concern deep symmetry in higher dimensional algebra.

But the full capability of the DeepMind AI system came in producing both a conjecture and a proof in knot theory:

Co-authors Professor Marc Lackeby and Professor András Juhász from the University of Oxford have taken the process a step further. They discovered a surprising connection between algebraic and geometric invariants of knots, establishing a completely new theorem in mathematics.

In knot theory, invariants are used to address the problem of distinguishing knots from each other. They also help mathematicians understand properties of knots and how this relates to other branches of mathematics.

The paper revealing their AI-system assisted accomplishments provides the following diagram showing how they foresee the interaction between AI systems and mathematicians will develop: 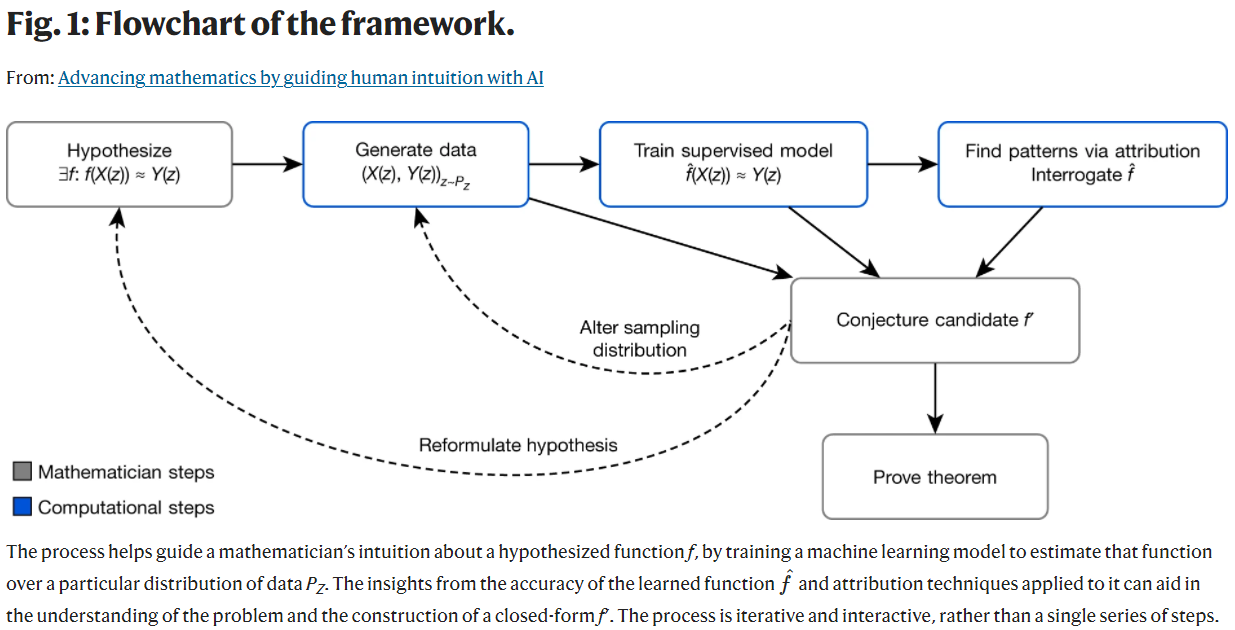 It's an exciting time in maths with the arrival of the Ramanujan machines. All the same, we think these developments give short shrift to Ramanujan's genius, which is why we've featured Mathologer's 45-minute video discussing how Ramanujan solved a difficult puzzle that appeared in a 1914 edition of Strand magazine at the top of this piece, just to give a hint of the kind of intuitions and insights these AI systems are being built to reproduce.