If you're new to the concept of Lévy flights and how they apply to stock prices, here's a quick primer. They are perhaps most easily understood as the outsized changes in stock prices that occur more frequently than would be predicted assuming the day-to-day variation in stock prices is described by a normal distribution from conventional statistics. Their variation is better described by the math for Lévy stable distributions, which have "fatter tails" than what you'll see in the normal distribution's bell curve.

In the dividend futures-based model we use to project the potential future trajectories of stock prices, these events can be seen occurring whenever investors shift their forward-looking time focus from one point of time in the future to another. In past week, the alternative futures chart confirms investors fully shifted their forward time horizon to 2022-Q3 after having fully focused it on 2022-Q2 in the previous week. 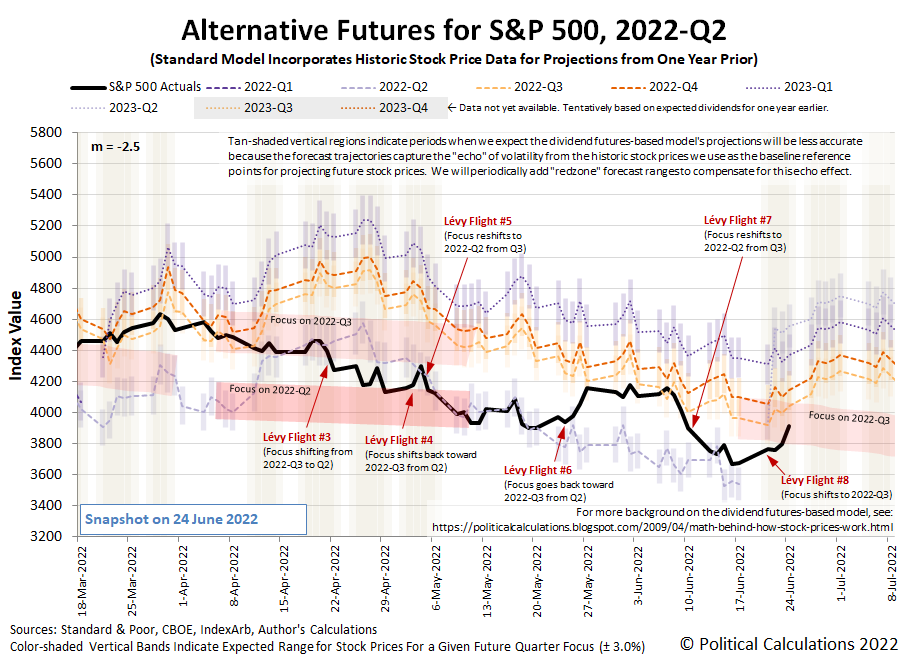 Not that they had any choice. The expiration of 2022-Q2's dividend futures contracts on 17 June 2022 represented the clock running out on the future of 2022-Q2. Its end meant investors had no choice but to shift their focus to a different point of time in the future, where they've fixed it on 2022-Q3. Again. For now.

From our perspective, the first half of 2022 has proven to be an exciting time. That's because of the large difference between the potential trajectories of the S&P 500 for the alternative trajectories for 2022-Q2 and 2022-Q3, which are set by the expectations for changes in the rate of dividend growth for these two quarters. The cluster of volatility the stock market has experienced in the year to date has seen investors repeatedly shifting their forward-looking attention between these two quarters, producing an unusually high number of atypically large Lévy flight events in the process.

Data suggesting the U.S. economy is slowing more than expected is altering investor expectations for how the Federal Reserve will be setting interest rates to fight inflation. While the CME Group's FedWatch Tool still projects half point rate hikes for both July and September 2022 (2022-Q3), it now projects quarter point rate hikes at six-week intervals after that through 2022-Q4 and 2023-Q1, topping out in a range between 3.50 and 3.75% in February 2023. More remarkably, the FedWatch tool is now projecting a quarter point rate cut in June 2023 (2023-Q2), which is to say a response to a developing recession is now built into tool's projections.

The Atlanta Fed's GDPNow tool continued to forecast real GDP growth of 0.0% for the current quarter of 2022-Q2, unchanged from last week's running assessment. In remarks delivered on 21 June 2022, current U.S. Treasury Secretary and former Chair of the Federal Reserve Janet Yellen indicated she uses "two quarters of negative growth as a good rule of thumb to indicate a recession". Given the Atlanta Fed's GDPNow tool's projections, the U.S. economy may be on course to qualify as being in recession during the first two quarters of 2022 according to that rule of thumb. Not that there aren't some positive developments that may help forestall such an outcome, which we'll cover later this week.