Young clubber tells The Project it's her 'human right' to have traditional face tattoos after staff refused to let her into a bar because of her ink: 'This is our culture'

What a lot of nonsense! She is about as Melanesian as I am. And I have known real Melanesians since my childhood -- and none that I knew wore any tattoos at all. She is just a white attention-seeker. Melanesians have dark skin, sometimes very dark. She looks nothing like a Melanesian 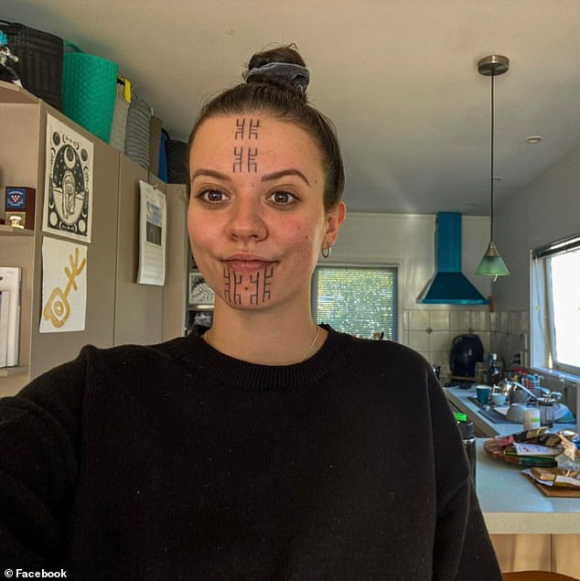 A young woman who was refused entry to a nightclub because of her cultural face tattoos says having her ink is her 'human right'.

Moale James, 23, who has Papua New Guinean heritage, was celebrating her partner's birthday by heading out to Brisbane's nightclub precinct in Fortitude Valley on Sunday morning.

But she soon found herself turned away from popular Latin American club Hey Chica! after security guards took issue with her traditional tattoos.

Ms James later took to Facebook to slam the 'racist and discriminatory' treatment she received.

Now, speaking to The Project, she explained why her markings are so important to her.

'There are so many groups of diverse people here that I live with and a very big Pacific Islander population in Queensland, and there's a lot of us that are wanting to practice culture, including marking our skin.

'We need to be reviewing policies and legislation that are not reflective of our community. We shouldn't have to assimilate, this is our culture and we should be allowed to practice it freely.

'It's a human right to do that so the laws that we live in should also reflect that, and they should reflect the community.'

Ms James says she 'wants to make some noise' for people who want to represent their cultural heritage.

'We went across the road to a different venue and the security guard there, all my friends said, are you going to let her in? Like look at her license, look at her.

'She looked at me and she said, "why wouldn't I let you in? We actually aren't allowed to discriminate and categorize you based on obviously what our cultural marks".

'And so we went and we spent the rest of the night in that venue.

'Now we're here trying to make some noise for anyone else that might proudly wear the marks of their ancestors too, change the legislation and liquor acts that might try to prevent us from practicing our culture.'

On the Hey Chica! website, its outline strict dress regulations.

'Dress to impress, smart casual is best, closed in shoes are a must. No face, neck or hand tattoos. Entry is at the discretion of the door host or management, dress code may vary for special events. For more information on dress regulations please contact us before your visit,' it reads.

Ms James has taken a stand saying she will be speaking with her local member about the 'rule' dictating that face tattoos are affiliated with gangs, and how this must be changed to reflect the diverse community.

She also said she expects a written apology from the venue.

In a private message to Ms James, which she shared on Facebook, the club apologised for the 'unintended distress' it caused but stood by its policy.

'Thank you for sharing your experience and for your understanding that the staff at Hey Chica! were following procedure,' the message said.

'While we appreciate that our rule has caused you unintended distress, we do enforce a blanket policy that prohibits head and face tattoos at Hey Chica! alongside other conditions of entry. While we understand this is a strict policy, we will continue to enforce this under the Liquor Act.'

Talking to the ABC, Ms James said the tattoos are marks handed down through generations and were from her great-grandmother dating back to when her village was established.

She went onto say the chief of the village asked his daughters to carry the marks and their stories on their skin, a request which has echoed through generations.

'They hold great spiritual and ancestral value to me and my community,' she said.

After being turned away from the club, Ms James said she went to members of her community who are lawyers, and found out the club can refuse entry and service to people - but as long as it is not discriminatory.

'The fact that I was clumped into a group of people that are thugs, gang members, dangerous criminals, that is not my story,' Ms James said.

'I went back and I said, "these are cultural and what are you going to do about that?" And no response.'

Ms James says she just people to hear her story and change their point of view on facial tattoos.

She also hopes the venue reviews its policy, but at the very least educates those who made the rules to change the way they think about people who wear their marks with pride.

This is alarming. An immature immune system might not cope well with what is often a harmful vaccine

Australia is a step closer to having Covid-19 vaccinations for children aged six months to five years, with Pfizer approved to submit an application to the medical regulator.

The Therapeutic Goods Administration has granted a provisional determination to Pfizer, which would allow the pharmaceutical giant to apply to extend vaccine use to the younger cohort.

Currently, the Pfizer vaccine has been approved for those aged five and over but there has been talk of extending its use to younger children, after US regulators recently approved a similar move.

A spokesman for the TGA said the provisional determination was the first step.

'The TGA considered all eligibility criteria, including evidence of a plan to submit comprehensive clinical data and the seriousness of the COVID-19 pandemic,' he said.

'Approval and potential supply in Australia would only commence should the vaccine be approved as safe and effective by the TGA and recommended for administration to this age group by ATAGI.'

The Moderna vaccine for children under five is already being considered for approval by the administration.

Health Minister Mark Butler did not want to put an exact timeframe on when a rollout of the pediatric vaccine would be approved.

'The TGA will take the time it needs to take, that's always been our approach, it was the former government's approach,' he told reporters in Canberra. 'I'm happy with however long they take to do the job properly.'

Mr Butler said discussions had taken place with Moderna and Pfizer to make sure vaccines were ready to be distributed once they were formally approved.

However, the health minister said it was too early to predict what the take-up rate might be.

'We have a great track record in this country of up-to-five immunisations generally,' he said.

'What the take up will be by parents of under fives is a little unknown, we'll be considering what support and information we provide to parents about this.'

Australia is on track to record its 10,000th death from the virus within days.

NSW, Victoria and Queensland together recorded 50 fatalities in the latest 24-hour reporting period, as the national toll rose to 9897.

NSW Health is warning of a rise in cases this winter as new sub-variants take over, making people vulnerable to a second dose.

The BA.2 sub-lineage remains the dominant variant. However, it is expected BA.4 and BA.5 will soon become so and are likely to be associated with an increase in infections.

Meanwhile, vaccinations are no longer mandatory in Queensland for visitors to hospitals, aged care facilities, disability accommodation and jails.

Workers in high-risk settings such as early childhood, primary and secondary education, prisons, youth detention centres, and airports are also exempt, unless required by employers to be vaccinated.

Replacing coal: A very tongue in cheek report below

The feasibility is absent and the cost would be astronomical

Coal generators are likely to shut sooner and Queensland will need big-scale pumped hydro equivalent to 30 times what is available at Wivenhoe power station before they do, the energy regulator is warning.

It is revealed in the Australian Energy Market Operator’s 30-year road map to be released today, which predicted the last coal generators could shut as early as 2040.

Currently the last coal-fired power station, Queensland’s Millmeran, is scheduled to wind up in 2051.

Just one Queensland coal-fired power station is currently scheduled to close before 2030 – Callide B in 2028 – while Gladstone and Tarong are forecast to shut down in 2035-36 and Stanwell, Kogan Creek and Yabulu are not due to close until the 2040s.

Under the most likely scenario to reach net zero by 2050 modelled by AEMO “all coal capacity could close as early as 2040”.

“If closures can be co-ordinated with adequate notice, then technical and market challenges may be managed. If they are not, the risk of price and reliability impacts on consumers quickly rises,” the road map warned.

“Deep storage”, like pumped-hydro projects the size of Snowy 2.0, will be needed to keep the lights on reliably once the state’s coal generators are shut down.

“It may be prudent for early investment in deep storage across the (national energy market), to enable improved resilience to earlier coal closures or project commissioning delays,” the AEMO report stated.

It stated that when all Queensland coal capacity retired, another 6GW of deep storage would be needed to complement 10GW of smaller battery storage, the “equivalent to 30 times the existing Wivenhoe power station”.

“To maintain a secure, reliable and affordable electricity supply for consumers through this transition to 2050, investment is required for a nine-fold increase in grid-scale wind and solar capacity, triple the firming capacity (dispatchable storage, hydro and gas-fired generation) and a near five-fold increase in distributed solar,” he said.

There will also need to be almost $4.8 billion in investment in power network, supply and transmission upgrades needed from far north to southern Queensland as part of the transition to a renewable electricity market.

On April 29, the University of Melbourne Student Union (UMSU) passed an anti-Israel motion declaring the only Jewish state of "ongoing ethnic cleansing and apartheid".

UMSU went as far as to justify and promote acts of terrorism by reclassifying the attacks on civilians as "self-defence".

"UMSU supports the self-determination of the Palestine people and their right to engage in self-defence against their occupiers", the UMSU statement reads.

Through their motion, UMSU urged the University to boycott everything Israeli.

However, the University of Melbourne quickly rejected the UMSU motion in a statement:

"The University of Melbourne Student Union (UMSU) is a self-governing body and operates as a separate entity to the University.

This anti-Semitic motion, narrowly passed in a vote by 16 members of the UMSU Students' Council, is not the position of the University of Melbourne; nor is it one that is endorsed or supported by the University.

Jewish students and staff are valued members of our University, along with our Jewish alumni and friends. We are proud of our relationships with the Jewish community in Australia and across the world, and our academic partnerships with Israeli universities and scholars.

Similarly, academic freedom and freedom of speech are core values of the University of Melbourne as outlined in our Freedom of Speech Policy, which applies to students, staff and visitors of the University. We expect all members of our community to exercise these rights respectfully."

Last month, the union was forced to rescind their motion amid legal challenges.

But not before I went to visit the union on campus. I learned three things about the student union while on campus:

* They don't seem to have many members
* Members have no idea what the union is doing in their name
* The student union is abusing their workers by signing them on as contractors to avoid paying worker's taxes and superannuation
None of it's surprising, but it never seems to get enough attention. So it's up to you to share what UMSU is up to.