The biggest market moving news of the week was the unexpected increase in reported inflation in the U.S. on Wednesday, 13 July 2022. Despite the shock, which was followed by related bad news for big banks pointing to developing weakness in the U.S. economy, the value of the S&P 500 (Index: SPX) reacted by mostly shrugging off the news, ending the week down less than one percent from where it closed the previous week. 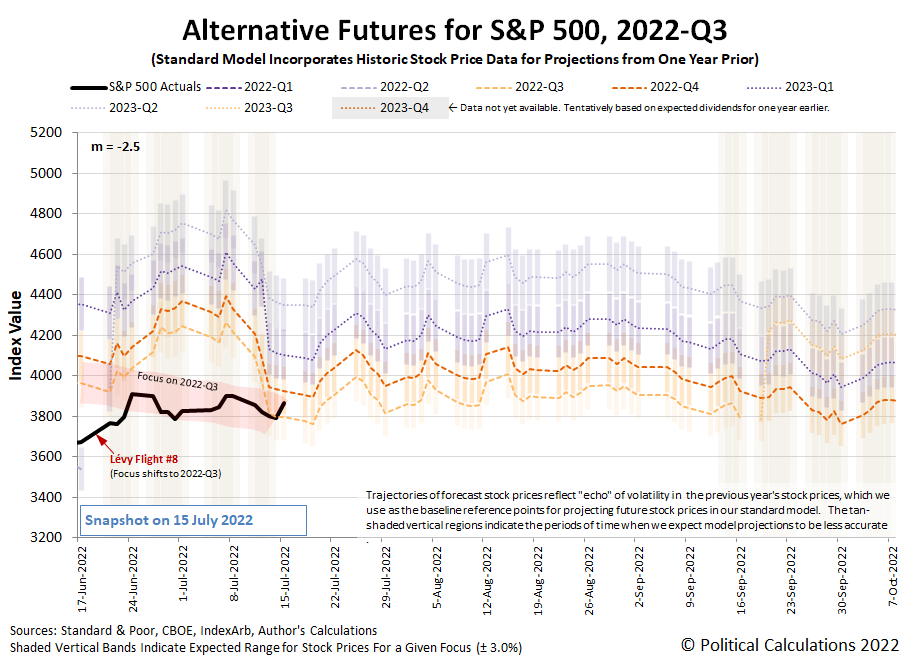 The chart shows that investors were tightly focused on 2022-Q3 throughout most the week and especially so from Wednesday through Thursday, which we see as the actual trajectory of the S&P 500 aligning with the center of the latest redzone forecast range. That makes sense because the Fed's next actions affecting short term interest rates in the U.S. will occur within this quarter. With Fed officials signaling those moves will involve larger than previously expected rate hikes to combat inflation, investors have had good reason to focus on this quarter.

But on Friday, 15 July 2022, stock prices unexpectedly jumped as it absorbed the bad news. We think that may be because investors began looking forward toward the end of 2022. That timing lines up with the new expected timing of the Fed's final rate hikes before the U.S. central bank may be forced to start cutting rates to respond to developing recessionary conditions in the first half of 2023.

We can't quite call it a new Lévy flight event just yet, because of the overlap in the dividend futures-based model's projected ranges for the S&P 500 for both 2022-Q3 and 2022-Q4. But now that we're at the end of the latest redzone forecast range, we have a relatively easy way to find out because of the relative levels of the model's projections based on investors focusing on either of these quarters.

There's a lot of moving pieces at play right now! Here's our recap of the past week's market moving headlines:

After the week's higher than expected consumer inflation data, the CME Group's FedWatch Tool still projects a three-quarter point rate hike for July 2022 (2022-Q3), followed by another one in September (2022-Q3). After that the tool sees two quarter point rate hikes in 2022-Q4, with the Federal Funds Rate topping out between 3.50 and 3.75%. The tool anticipates a quarter point rate cut in June 2023 as the Fed responds to recessionary conditions investors currently expect to have fully developed by then.

Looking backwards, the Atlanta Fed's GDPNow tool's final projection for real GDP suggests the U.S. economy will have shrunk by 1.5% in the recently ended second quarter of 2022. That's down from last week's projection of -1.2% growth. The BEA will provide its first official estimate of 2022-Q2's GDP near the end of the month. The Atlanta Fed's GDPNow tool will start giving its estimates of real GDP for the current quarter of 2022-Q3 next week.