The third quarter of 2022 saw the U.S. stock market's dividend paying stocks turn in another mixed performance. The following chart visualizes the count of U.S. firms either increasing or decreasing their dividends from the year-ago quarter of 2021-Q3 through the just-completed 2022-Q3. 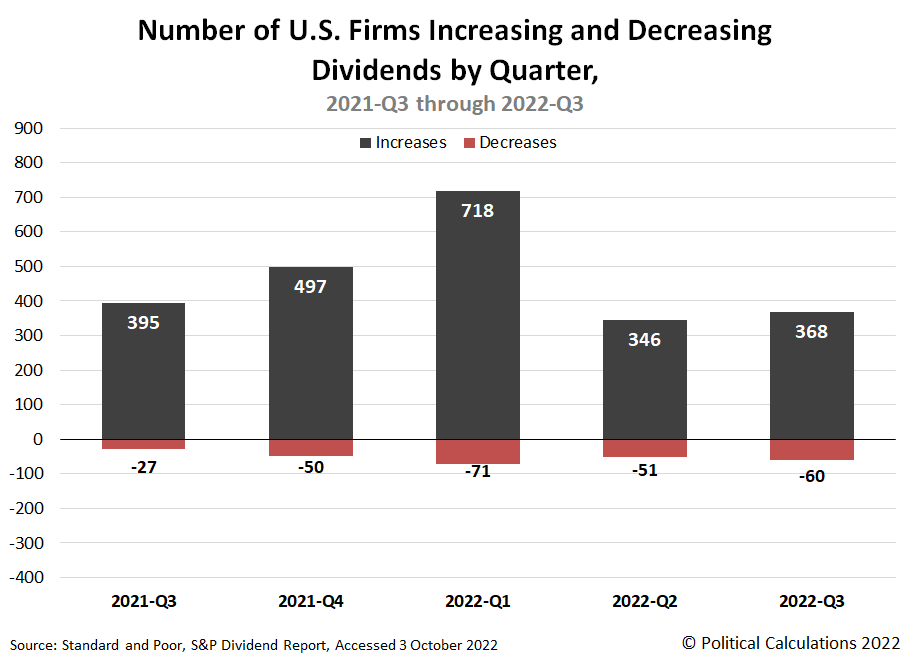 The bad news is that the number of dividend cuts has risen in 2022-Q3. Sixty firms reduced their dividend payments to shareholders. That figure is up from the previous quarter's total of 51 and is more than double the year ago quarter of 2021-Q3.

The good news is more mixed. While the number of U.S. companies boosting their dividends increased quarter-over-quarter from 346 to 368, the year-over-year data is down, falling from 2021-Q3's 395 dividend rises.

The next chart breaks down the number of dividend increases and decreases for each month from January 2004 through September 2022. 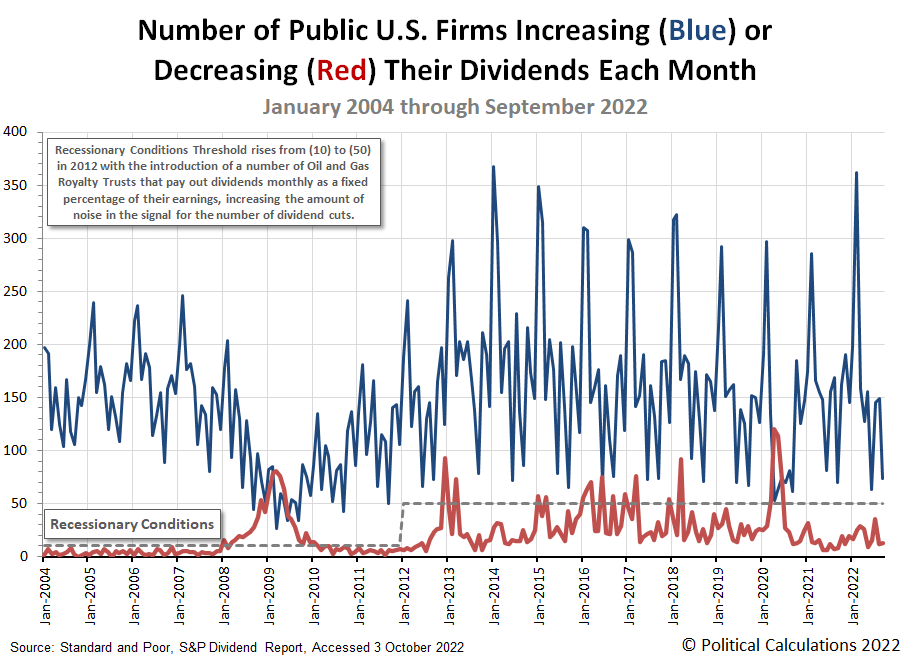 Here's how the U.S. stock market's dividend metadata has changed in September 2022 compared with August 2022's figures and with the year-ago totals recorded for September 2021:

Here's our sampling of announced dividend cuts for September 2022. If you're a fan of REITs that are sensitive to interest rate hikes, it wasn't a good month. If you're someone who gets upset at seeing fixed and variable dividend-paying companies listed together as dividend cutters, it's time to clutch your pearls.

We counted three variable dividend-paying firms in this month's sampling, each from the oil and gas sector, which is well below the level that would indicate developing trouble for the industry. Then again, that's looking backward and not forward in time, so let's do that next.

David Brancaccio: I see from your data that nearly every CEO thinks there will be a recession. But what is this, maybe I’ll be grasping at straws here, but maybe it’ll be a little recession? What are the CEOs telling you about if this is mild or severe?

Paul Knopp: David, what this survey revealed is that 91% of CEOs think there will be a recession in the next 12 months. And only one-third of those CEOs believe that that recession will be mild and short. So while the survey didn’t have anything affirmative about how long a recession would last, or the severity of a recession, it certainly is true that they’re expecting a recession, that’s not going to be just mild and short.

That's 91% of 1,325 CEOs who KPMG surveyed between 12 July and 24 August 2022 who are anticipating a recession in the next 12 months. We anticipate the U.S. stock market's metadata for dividend cuts will provide a near real-time indication of the relative health of the U.S. economy over that period, much as it has in the past.

But then, that's why we track dividends by the numbers every month, with a special focus on dividend cutters. It's among the simplest near real-time economic indicators out there!