The first week of October 2022 saw the S&P 500 (Index: SPX) swing wildly along with investor expectations for future interest rates.

Starting from its Friday, 30 September 2022 closing value of 3,585.62, the index powered upward early in the week to reach a high of 3.790.93 by the close of trading on Tuesday, 4 October on the news the Royal Bank of Australia would not hike the interest rates it controls by as much as expected because of developing recessionary conditions. With the U.S. economy faced with the similar situation, investors began anticipating the Federal Reserve would also be forced to pull back its recent rate hike ambitions, which would perhaps peak in 2022-Q4, shifting investor attention toward that nearer term horizon.

That expectation had a short life thanks to a full court press by the Fed's minions on Thursday, 6 September, before being fully dashed by a stronger-than-expected September 2022 jobs report on Friday, 7 September 2022. The S&P 500 ended the trading week at 3,639.66, right in the middle of the alternative futures chart's redzone forecast range that assumes investors are focusing on the more distant future quarter of 2023-Q2. 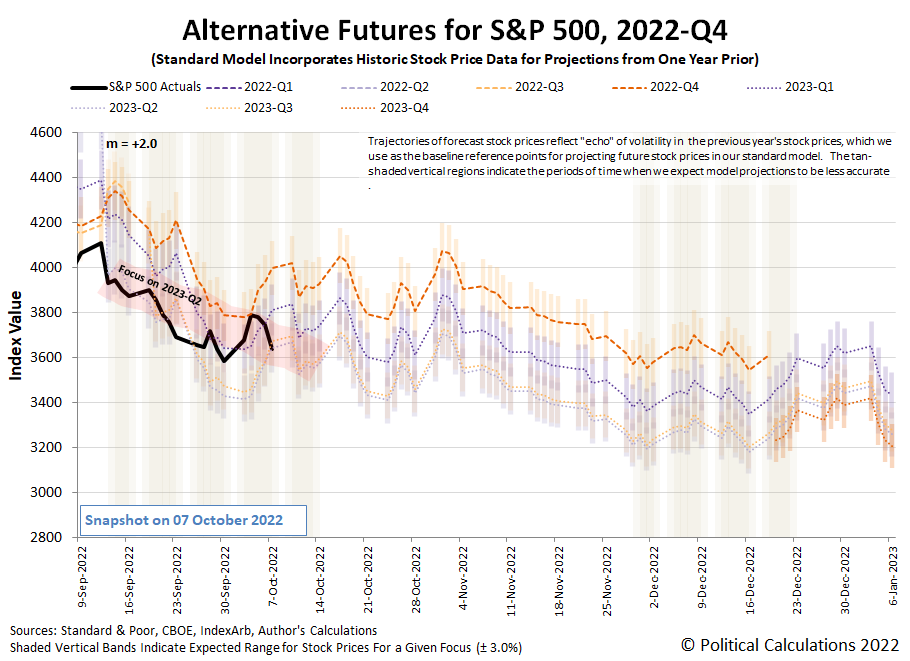 Which is to say the index behaved as the dividend futures-based model suggests it should given where it started and how the investment horizon shifted with the week's changing expectations of the future. The week's action almost qualifies as two Lévy flight events, and would have had the index closed just 20 points higher on Tuesday, 4 October 2022. As it was, the index moved entirely within the range associated with investors focusing their forward-looking attention on 2023-Q2, so we cannot definitively reject the hypothesis that's all investors did during the week that was. We can only say they appear to have briefly shifted most of their attention from 2023-Q2 to 2022-Q4, before locking it back on 2023-Q2 again.

Here are the week's market moving headlines to color in the context behind the numbers from the week's trading action.

The Atlanta Fed's GDPNow tool's projection for real GDP growth in the just-ended calendar quarter of 2022-Q3 rose from +2.4% to +2.9% as the U.S. economy rebounded from the week first half of 2022. The Bureau of Economic Analysis will provide its first official estimate of real GDP growth in 2022-Q3 at the end of October 2022.