With another higher-than-expected inflation print during the week, the S&P 500 (Index: SPX) experienced another surge of volatility during the week that was.

But by the end of the week's trading, the index closed at 3,592.76, down 46.90 points or 1.3% from the previous week's close. It also ended the week right in the middle of the most recent redzone forecast range we added to the alternative futures chart several weeks ago, as stock prices resumed their downtrend. 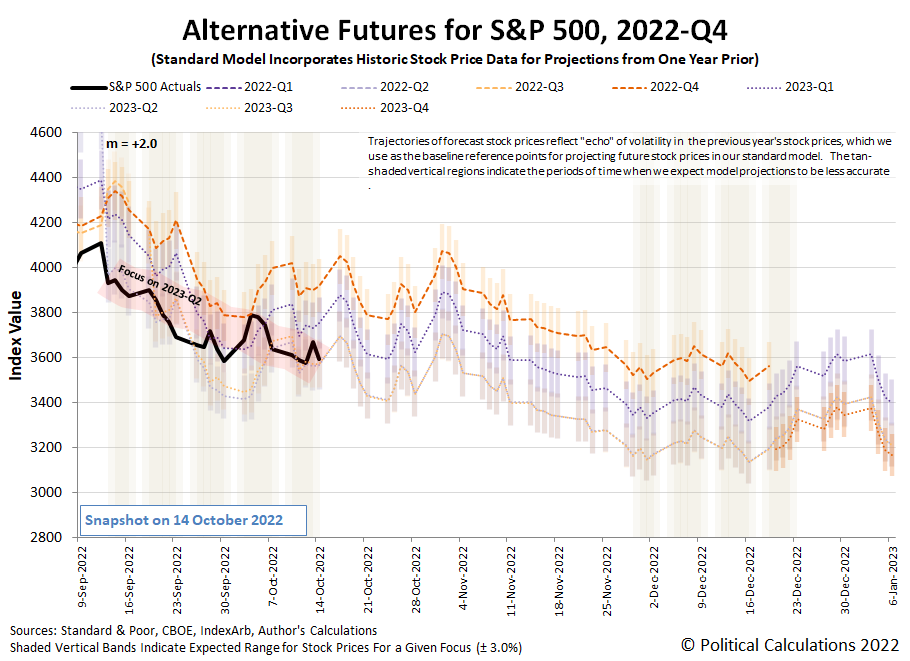 The week's most volatile action is concentrated from Thursday to Friday, 13-14 October 2022. The pricipitating factor for the volatility was the higher-than-expected rate of inflation in the U.S. reported on 13 October 2022. That news initially sent stock prices until the prospect of a full percentage point increase by the Fed at its next meeting prompted a surge in stock prices as investors shifted a portion of their forward looking focus toward the nearer term.

But only a partial shift, where once again, the change in stock prices didn't change enough to qualify as a full Lévy flight. By the end of the week, we find the S&P 500's trajectory to be consistent with the projected trajectory associated with investors focusing their attention fully on 2023-Q2.

We'll discuss the reason why that is at the end, following our recap of the week's market moving headlines.

The CME Group's FedWatch Tool continues to project a three-quarter point rate hike when the FOMC next meets on 2 November 2022, but now signals it will be followed by another on 14 December (2022-Q4). In 2023, the FedWatch tool now projects quarter point rate hikes in February and March (2023-Q1), setting the top for the Federal Funds Rate's target range at 5.00-5.25%. However, that could reverse as earlier as May (2023-Q2) as developing recessionary conditions force the Fed to change its rate hike tactics.

The Atlanta Fed's GDPNow tool's projection for real GDP growth in the just-ended calendar quarter of 2022-Q3 dipped slightly from +2.9% to +2.3% as the U.S. economy rebounded from the week first half of 2022, as supported by recent trade and atmospheric CO₂ data. The Bureau of Economic Analysis will provide its first official estimate of real GDP growth in 2022-Q3 on 27 October 2022.