The S&P 500's trajectory during the week remains consistent with investors focusing on the current quarter of 2022-Q4 in setting current day stock prices. The latest update to the alternative futures chart shows where that puts the S&P 500's trajectory with respect to the dividend futures-based model's projections of where the index would be if investors shifted their attention to more distant future quarters. 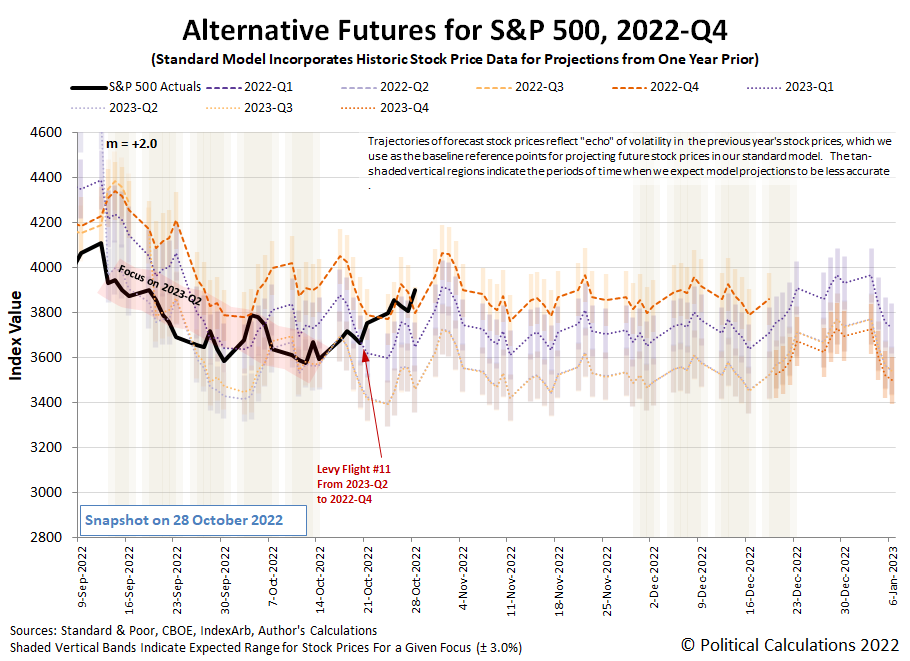 We're taking the trouble to point those alternative futures out because investors being focused on the current quarter means one thing with absolute surety. By the time this quarter ends, they will shift their forward looking focus to one of these other points on the time horizon. That shift, regardless of which future quarter they might settle upon, will be accompanied by a downward movement in the level of the index. How much of a downward movement will be determined first by which quarter draws their gaze and second by how much the expectations for dividends for that quarter might change.

We've seen that phenomenon before. It happened most recently during the second half of the second quarter of 2022 as the level of the S&P 500 repeatedly see-sawed between the levels associated with investors looking at different points of time in the future. For us, it's exciting to watch these Lévy flight events play out in real time. Depending on how you're invested, your entertainment factor while experiencing such high percentage changes in value may differ....

While the remainder of 2022-Q4 may not be quite as volatile as 2022-Q2 was, the one thing that can prompt investors to suddenly shift their time horizons is what they find in the random onset of new information. With that in mind, here are the market-moving headlines investors absorbed during the past week.

The Atlanta Fed's GDPNow tool's first projection for real GDP growth in 2022-Q4 is +3.1%. Meanwhile, to close the books on 2022-Q3, the Bureau of Economic Analysis first estimate of real GDP for 2022-Q3 is 2.6%, slightly lower than the GDPNow tools' final forecast of 2.9% for the recently ended quarter.