Getting there involved the thirteenth Lévy flight event of 2022 by our rough count, prompted by a better-than-expected Consumer Price Inflation report, and fueled by what ZeroHedge described as the "biggest short-squeeze on record, based on Goldman's 'Most Shorted' basket".

For the dividend futures-based model's alternative futures chart, we see the new Lévy flight event as a shift in the forward-looking time horizon for investors from 2023-Q1 back toward the current quarter of 2022-Q4. 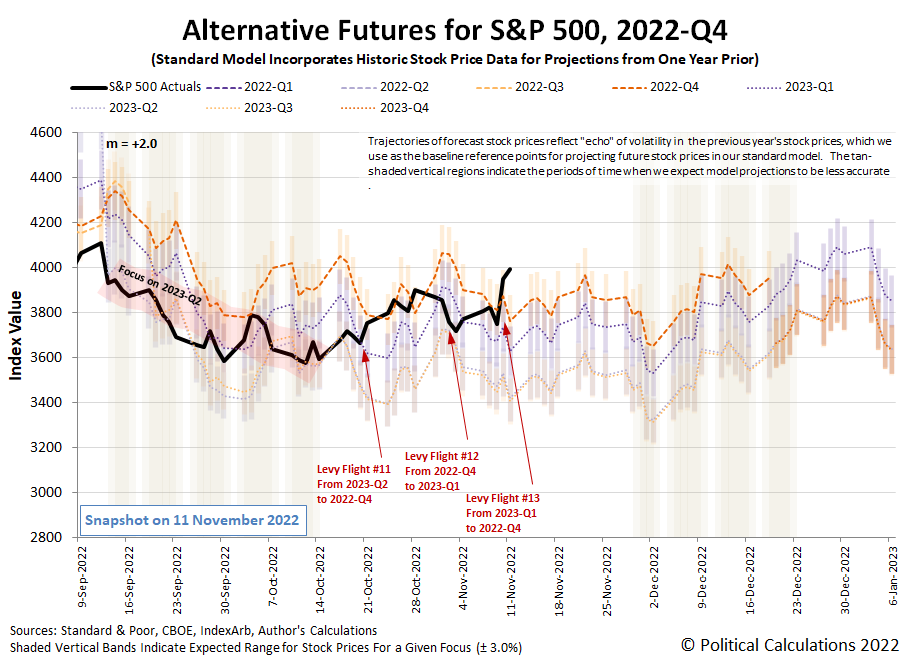 That shift occurred because with inflation being reported lower than expected, the message the Federal Reserve's interest-rate setting Federal Open Market Committee will send at its upcoming 13-14 December 2022 meetings will carry especial weight for what investors should expect going into 2023.

Going back to the alternative futures chart, we see the level of the S&P 500 is elevated with respect to the trajectory for investors focusing their attention on 2022-Q4. It's running at the high end of the range the model projects over the next several weeks, which may be the result of noise from the short-squeeze rally.

Given that investors are focusing on 2022-Q4, we need to point out there will be at least one more Lévy flight event before the end of 2022. If that happens during the next several weeks, that means stock prices would fall by a significant percentage. There's also the wild card factor of the additional noise that has been injected into the market from the short squeeze event. Noise always dissipates, it's only ever a question of when. In this case, that dissipation will also mean falling stock prices.

Here's a recap of the week's market moving headlines:

Meanwhile, the Atlanta Fed's GDPNow tool's projection for real GDP growth in 2022-Q4 rose to +4.0% from last week's +3.6% estimate. There continues to be a big gap between its current projection and the so-called "Blue Chip consensus" that anticipates near zero growth in 2022-Q4.