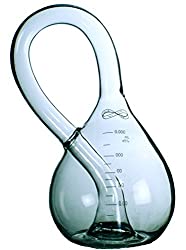 From time to time, we like to offer gift advice for what to get that one person you know who's almost impossible to find a gift for. This year, we're taking on the challenge of what to get that person if they're really into maths!

Sure, you could get them books, but the problem with that is they'll either be much too advanced or much too simple for the person for whom you're gift shopping. Partly that's because math concepts, by their very nature, go to extremes. There's not much in the middle, so your better bet is to get them maths stuff.

Maths stuff can be as complicated or as simple as you can find and it will probably be very appreciated by your maths-loving gift recipient. We're going to suggest the sweet spot is represented by the seeming impossibility of a Klein Bottle.

What makes a Klein Bottle special is how it incorporates the maths of topology in its construction. It's a surface that has only one side and does not have any edges, so it neatly introduces the concept of infinity in the form of something that can also be used to store stuff, which makes it unexpectedly practical.

You can even get one on Amazon, handmade in glass by UC-Berkeley's topologist Cliff Stoll. But if you're reading this, you'll want to act quickly because he only makes a limited quantity each year!

Speaking of which, the following 10-minute Numberphile video shows how he and Lucas Clarke made them this year from borosilicate glass tubes.

That leave the challenge of how to fill a Klein Bottle, for which there is another Numberphile video, also featuring Cliff Stoll, where you can get the answer while going on an unexpected ride through topological theory and physics.