Back in February, I gave a speech on how someone would think if they were to take seriously the mega-problem of climate change.  The speech went well enough as these things go and it was captured by a videographer who knows how to take pictures.  But there were glitches like when the slides wouldn't advance smoothly, hemming and hawing, and assorted scenes where I really needed a drink of water.  A pass through the video editing program got rid of the most serious glitches, but I was left with the problem of WAY too much of me—talking head.  Worse, it ran slightly more than an hour and while I have long-posting privileges at Youtube, the chance of anyone watching such a beast was close to zero.

So, I have decided to divide the speech into more bite-sized chunks, cover the radical editing with some interesting b-roll, and post quality footage to both Youtube and Vimeo.  The point of these little movies is to provide video backup for a plan as outlined by Tony yesterday.  Essentially they will include:

1. The uselessness of protests—marching in circles

2. How we got into this mess—the ultimate seduction of fire

3. Class analysis and solutions—from the trap constructed by geniuses

4. How much would this cost?—and how do we get the money to pay for it?

One of the main reasons for all this video enthusiasm lies in the fact that I have finally upgraded my computing power.  Because I know how to get major results from Macs and wanted another, I was stuck with a narrow range of choices because Apple hasn't put a lot of effort into the big desktop box in recent years.  In fact, they don't really make one anymore.  But when they did make one, they were serious machines.  Expensive yes, but beautifully built.  So I got an early 2009 Mac Pro which was the least expensive version that will run the latest OS X (Yosemite).  Had to do some internal upgrades when I got it home but I now have the muscle to effectively edit high-def video.

Rumor has it that the Mac Pro is the computer that "saved" Pixar's Finding Nemo.  The big trick of that movie was realistic looking water.  But it took MAJOR horsepower to render.  The original Mac Pro still used the Motorola CPUs in the G5 models.  But they were inefficient and pumped out major heat so the case was made from machined aluminum, it had an open grate front and back, plus 11 fans.  Failure by Motorola to improve on these energy hogs is what drove Apple into the arms of Intel.  And Apple made the CPU changeover in time to save a kid's movie.  My new tool has a second-generation quad-core Intel chip.  It has just four fans and they almost never run unless I am doing something strenuous like rendering out an animation sequence or compressing video. 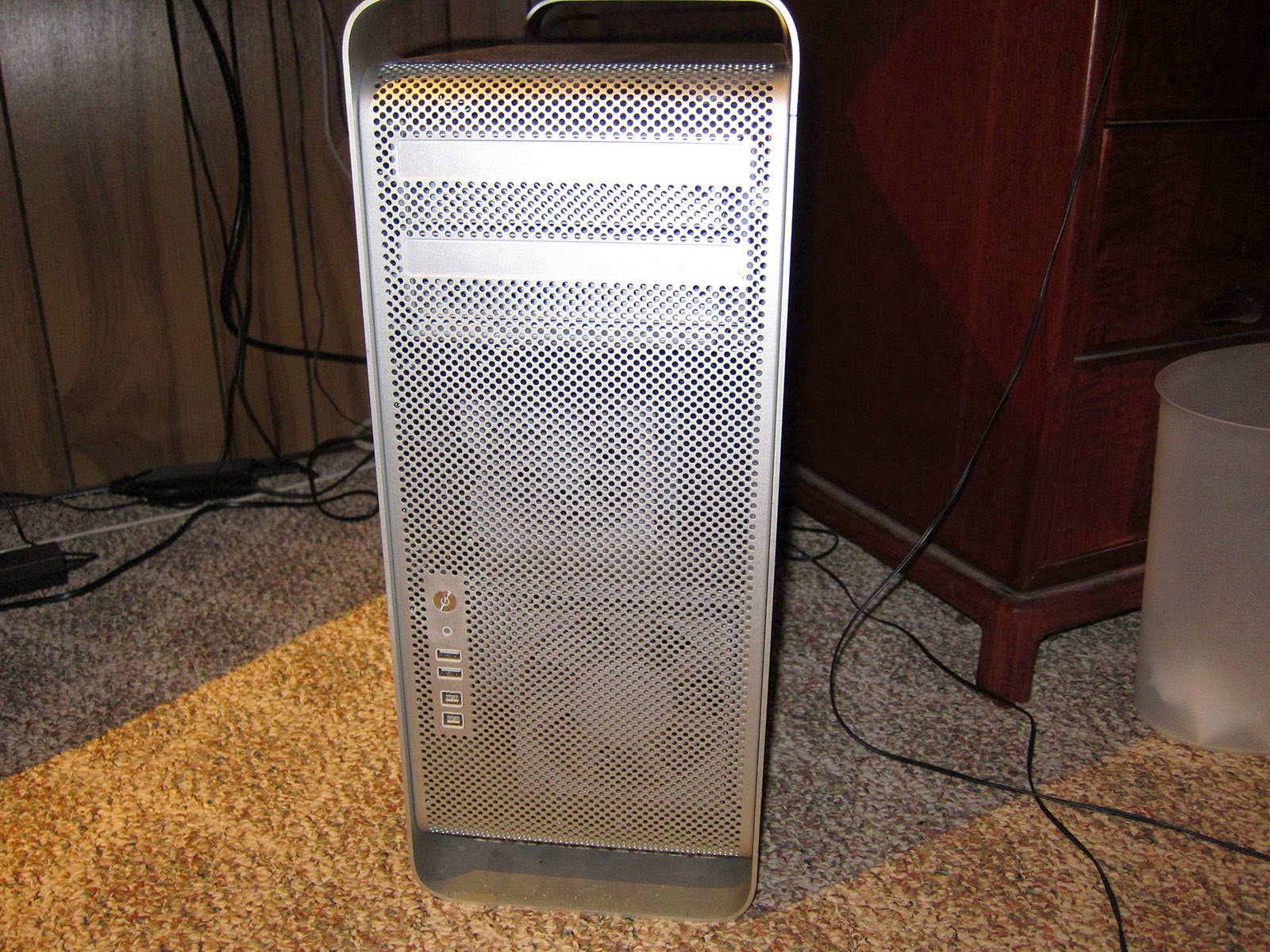 There are slide-out trays for 3.5" hard drives.  It is possible to have 24 tb of internal storage.  There is generous and well-ventilated space for PCI cards so really high-speed external storage is possible.  This box can easily be tricked out to do 4k video editing and the price for 4k is drifting down. 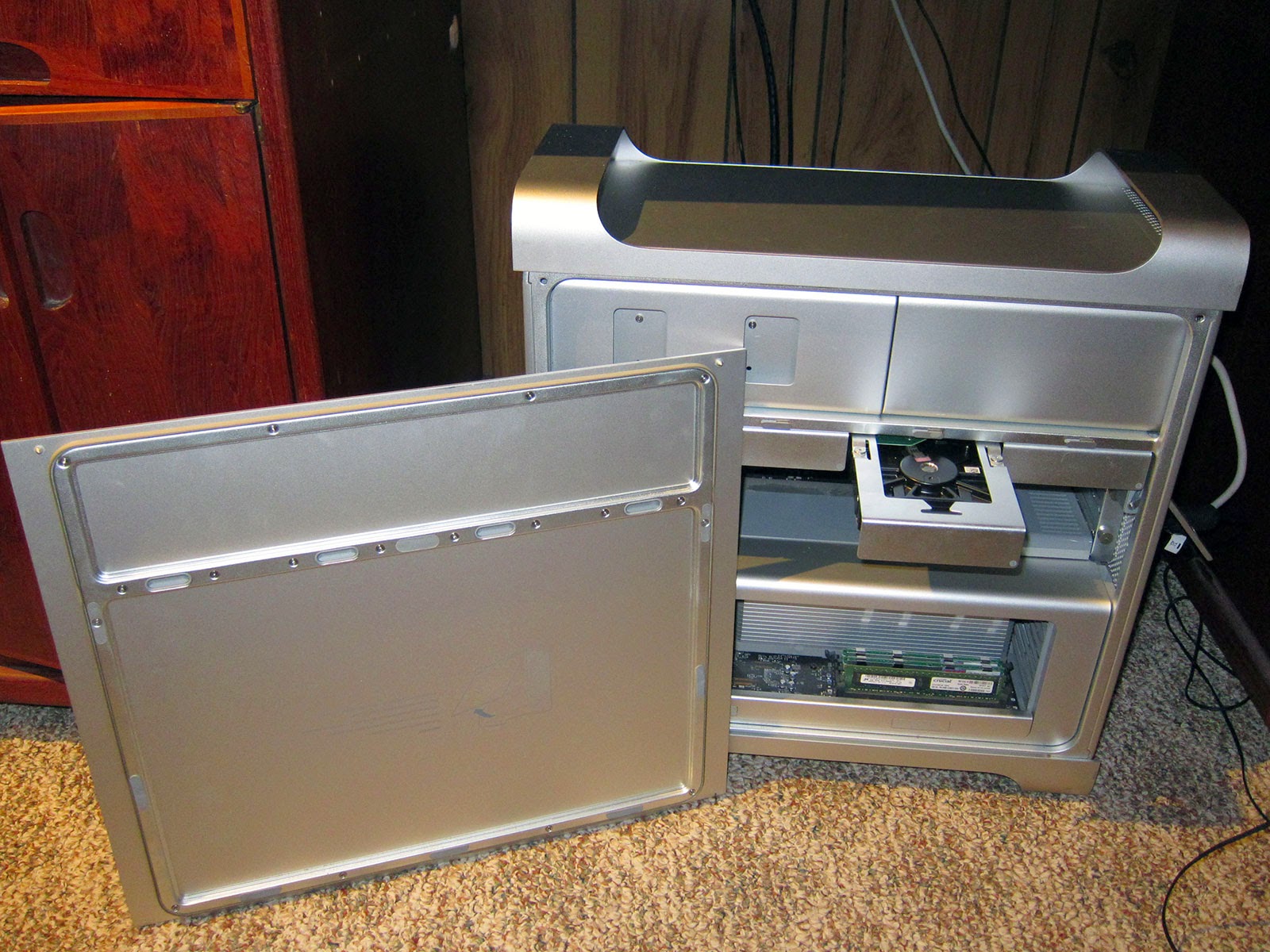 I am not quite done fiddling but I have already edited a two-minute video for a local environmental effort with it.  I am ready to rock and roll.