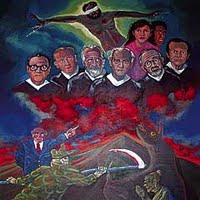 The Spanish Supreme Court recently ruled in favor of a High Court judge's continued investigation into the murders of the Salvadoran Jesuits and their companions. The Supreme Court ruled that reforms made to the country's universal justice doctrine (done so under pressure from China) does not prevent an investigation into the case of the UCA martyrs.

The Supreme Court ruled that because five of the eight victims were Spanish, the investigation can continue. The Court also ruled that the investigation can continue because the Salvadoran government's decision to prosecute low level soldiers in 1991 was done so not in the pursuit of justice, but as part of an effort to deflect attention away from superiors who ordered the killings (somewhat liberal interpretation on my part).

Passed by Congress with the sole support of the Popular Party (PP), part of the text of the new law states that Spain cannot investigate some crimes committed in other countries where judicial proceedings have already been opened unless there are indications that a foreign government cannot or is unwilling to prosecute.

Two retired military officers, Colonel Alfredo Benavides Moreno and Lieutenant Yusshy René Mendoza Vallecillos, were convicted by a Salvadoran jury in 1991 and sentenced to 30 years in prison for the massacre. However, they were both freed under a government amnesty two years later.

In its opinion, Spain’s Supreme Court said that there were “serious and reasonable” indications that the 1991 jury trial was not held to find those responsible for the murder but instead to obstruct justice, “all of it accompanied by the absence of the necessary guarantees of independence and impartiality.”