Today, we're featuring a nearly brand new invention, in that it was just awarded a U.S. Patent on 12 May 2015! And better still, it solves a problem that we suspect very few realized needed a solution. But we'll let its inventor, Elliot Zachary Kampas of Syracuse, New York explain via the "Background of the Invention" section of U.S. Patent 9,027,807:

This invention is directed to a wearable cup and/or bottle holder, that also serves as a hands-free utility storage device that can be strapped or fastened around a person's leg so that he or she will have a place to hold their beverage while seated or standing in a stadium or other arena, or at the beach or at a picnic, while riding in a car or boat, fishing, and even when walking in the park.

There has long been a need for some means to secure beverage cups or bottles when at an event, especially when the seating at the event provides no place to set down the cup or bottle securely. Cups and bottles are frequently knocked over and spilled when persons move around at the events. Frequently, persons can lose track of which cup or container belongs to which person, as well. Accordingly, a convenient holder worn on a leg, positioned anywhere below the hip all the way to the ankle, has been needed.

Well, when it's put like that, the solution becomes obvious, doesn't it? But in case you need some help visualizing it, we'll suggest you turn your attention to Figure 4 in the patent so you can see it exactly as envisioned by the inventor: 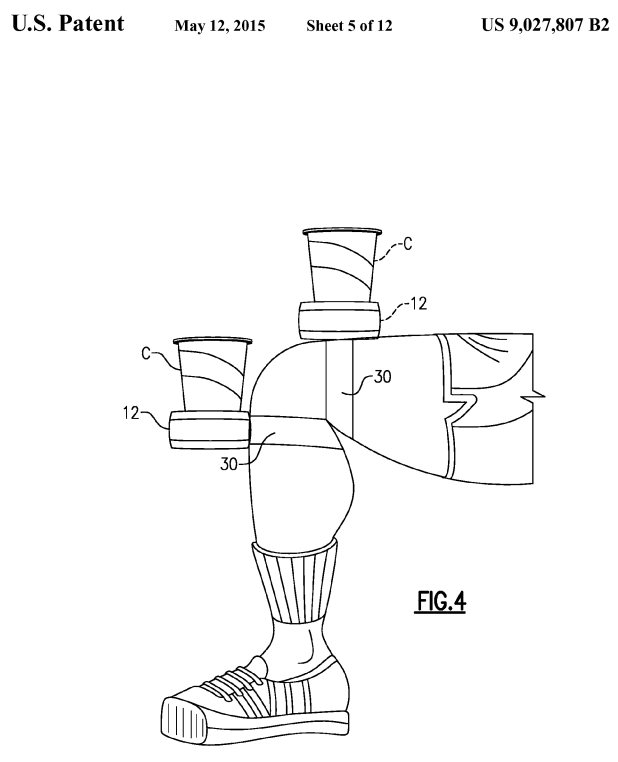 So we see that our drink consumer has at least two options by which the leg-mounted cupholder might be positioned for optimal positioning.

But wait, it gets better! Inventor Kampas reveals just who he envisions is the target market for his leg-mounted cupholder in Figure 6.... 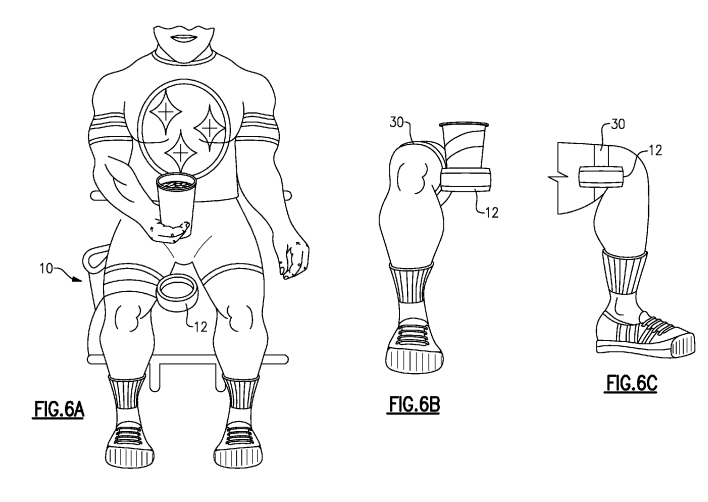 Notice the design on the invention user's shirt? Why, that's almost the Pittsburgh Steelers logo, as might be drawn to avoid running into any issues with copyright and trademark infringement!

But wait, it gets better! Our heroic inventor goes on to demonstrate in Figures 7 and 8 that the invention can also be used while at the beach. Whether standing... 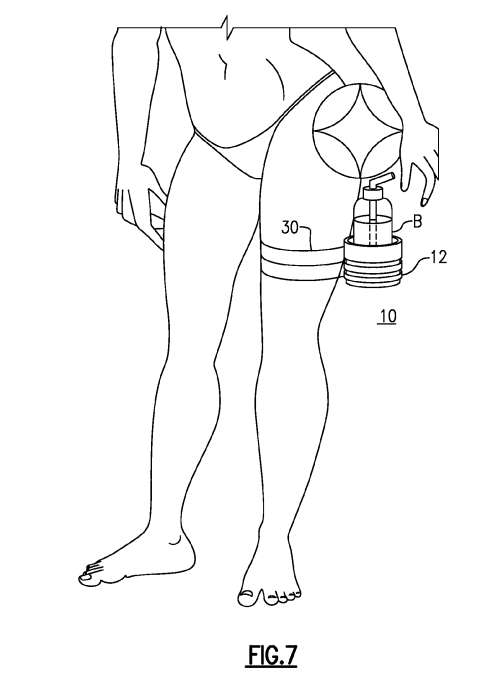 Alas, the inventor may not have considered the potential for producing unfortunate tan lines that might result from the latter application!