Having previously looked at 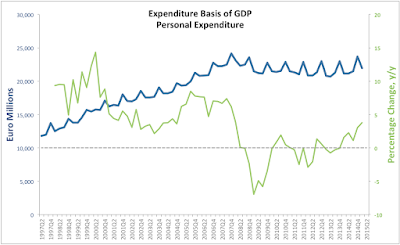 This is the second fastest rate of Government spending growth since 2Q 2007 and marks 8th consecutive quarter of positive growth in spending, full three quarters longer positive run than for Personal Expenditure. To compare the two series: austerity from 1Q 2013 on implies a rise in Government current (ex-investment) spending of 7.5%, while recovery in the economy means Personal Consumption rising by 5.4% over the same period. 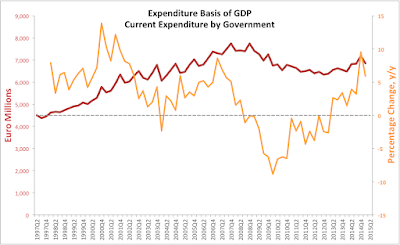 Gross Domestic Fixed Capital Formation (aka a proxy for Investment - proxy because it includes questionable stuff, like aircraft, as well as some of the MNCs-valued investments) was up 4.03% y/y in 1Q 2015 which is miles lower than 20.3% growth registered in 4Q 2014 when scores of punters rushed out to buy property, and when REITs continued to replace vultures in doing the same. Over the last 4 quarters, average rate of growth in Fixed Capital Formation was 12.77% and even back in 1Q 2014 this activity expanded by 10%, so 1Q 2015 was a major slowdown in activity, albeit it remained positive. This might be a healthy sign of structural normalisation in what has been becoming a somewhat overhyped property market, but it can also be a short-term blip. Overall, 1Q 2015 was the slowest y/y growth quarter since the onset of the 'recovery' in the investment markets here in 3Q 2013 and the first quarter in the period when growth rates fell below 10% mark (albeit 1Q 2014 actual expansion was 9.979%). 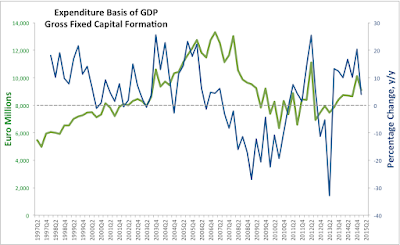 With the above, Final Domestic Demand (probably the closest we have in the National Accounts to a realist measure of our economic performance) posted a healthy y/y expansion: 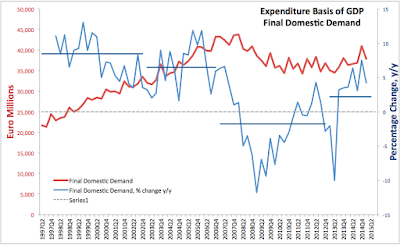 And it is consistent with the longer term trends: 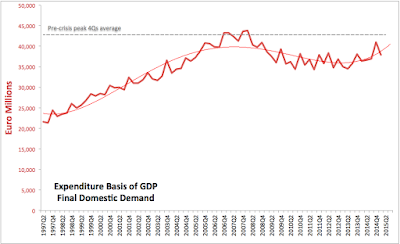 Table below summarises source of growth in real GNP:

As shown above, single largest contributor to growth in GNP in 1Q 2015 (annual rate of growth) was Net Trade Balance (Exports less Imports) growth in which accounted for 33.81% of the total expansion in GNP. Personal Expenditure was the second largest contributor to growth with 28.83% share. Overall, growth in Final Domestic Demand (domestic economy proxy) was responsible for 55.4% of total growth in GNP over 1Q 2015 compared to 1Q 2014. Interestingly, inventories (Value of Changes in Stocks) accounted for almost 1/5th of total growth in GNP.