Going by the level of carbon dioxide measured in the Earth's atmosphere in July 2015, it appears that Earth's economy continued its recessionary cooling in July 2015, with the trailing year moving average of the year over year change in the CO2 levels ticking up to be just barely above its June level. Not uncoincidentally, Earth's largest producer of atmospheric carbon dioxide, China, saw its national economy continue to sputter during the month. 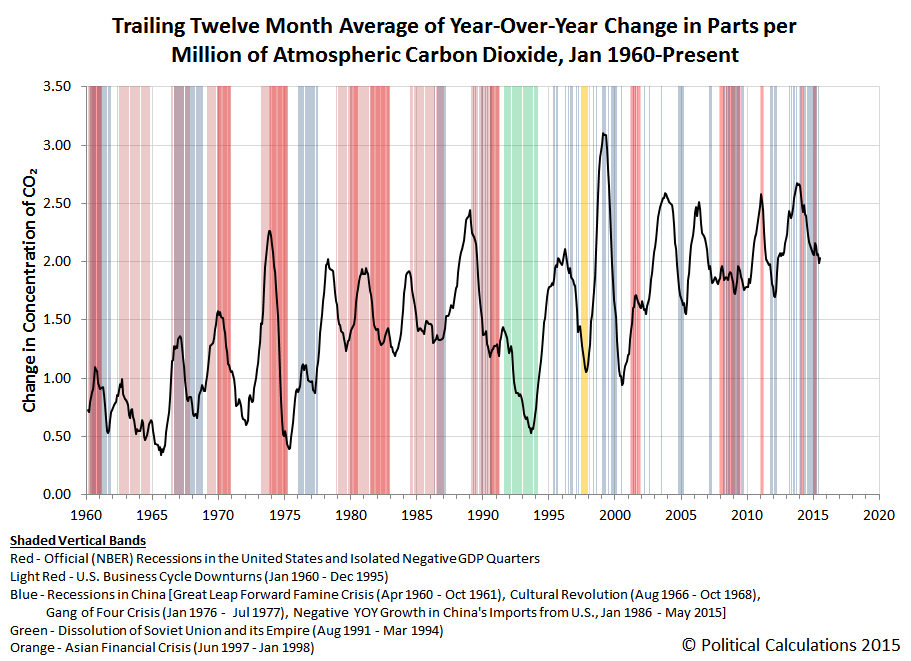 The world's economy has been cooling right along with the deceleration in the pace at which carbon dioxide levels in the Earth's atmosphere have been increasing, which began after China's political leadership held their third "plenum", or leadership meeting, in which they committed to a plan to put the nation's economy on a "sustainable growth path" after years of strong economic growth. Since that meeting, China's leaders have been steadily redirecting resources away from supporting the expansion of the nation's low-cost export driven industries to instead favor the expansion of service-oriented enterprises, with the goal of transforming China's economy to be primarily driven by domestic consumer demand.

So at least what we're observing isn't happening by accident.

Picking up on our previous hypothesis, we're pleased to announce that we were wrong!

What we're referring to specifically is our effort to fill in more of the world's economic history to correlate where decelerations in global atmospheric CO2 levels had occurred, where we had hypothesized that the Cuban Missle Crisis of October 1962 may have led to sanctions or other negative economic events that occurred in many of the world's communist, socialist and progressive regimes, which are notorious for covering up their failings.

Using historical data from on territorial carbon production from the Global Carbon Project, we found evidence that the territory of Russia saw significant increases in the millions of tons of carbon it burned during the period of interest from 1962 through 1965, which ruled out that possibility.

We also observed that China's own carbon emissons were stagnant from 1963 through 1964, after having plummetted in the preceding two years. Since this is annual data, it occurred to us that China really bottomed in 1962 and was very slow to recover from its failed Great Leap Forward initiative and the famine it produced.

It then occurred to us to consider another possibility. Even though China's GDP is believed to have grown in 1963 and 1964, we wondered if perhaps another economic and CO2-producing heavy hitter, the United States, also recorded positive economic growth during the period in question, but perhaps in a less-than-stellar economic environment.

So we tapped Jon Gregory Taylor's work on Investment Timing and the Business Cycle to find out if any of the observed decelerations in global CO2 levels were correlated with downturns in the U.S. business cycle.

Oh yes, they mostly were! Those results are represented in our chart above, as the light red shaded vertical bands.

The results aren't perfect, but that perhaps might be attributed to the relative severity of the U.S. business cycle downturns. For example, while a severe downturn might be expected to have a negative impact on global CO2 measurements, a very mild downturn might only have a very mild, or muted effect - say only slowing the rate at which CO2 levels increased, rather that correlating to an outright decrease in them, as we often observe during official periods of recession.

Taylor's data on U.S. business cycle downturns only covers the period through December 1995. In our next update, we'll see if we can't flesh out more of the period from 1996 onward.