Unless methods are found to fund massive infrastructure improvements it really doesn't much matter what they agree to in Paris, atmospheric CO2 will continue to increase.  And how do we know that?  Because the first 20 such gatherings achieved no decreases whatsoever.  Good intentions make people feel good but without new hardware, intentions alone are pretty damn meaningless. 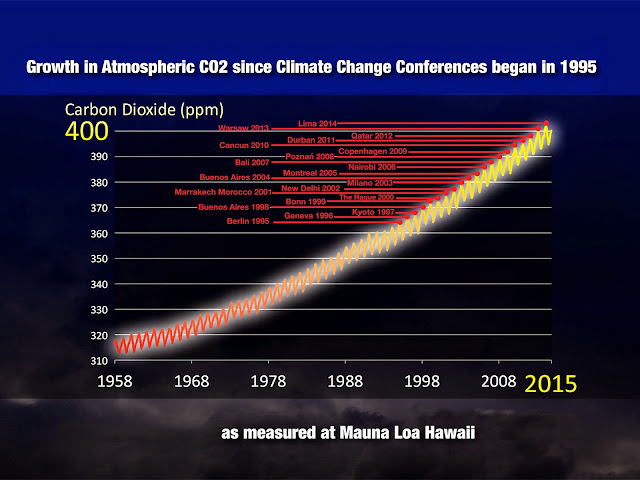 In spite of the routine futility of climate conferences, the evidence of change is now so scary that one of these days, there might actually be something effective accomplished—if only by accident.  Hunziker below lists just some of the arguments that will likely emerge at the Paris gathering.  Unfortunately, the argument that will probably come up is that so far, the scientific emergency is still not acute enough to throw neoliberalism into the trash heap of human history.

The IPCC Caught in a Pressure Cooker

“Paris 2015” designates the 21st Session of the Conference of the Parties to the United Nations Framework Convention on Climate Change (“COP21”) to be held November 30th to December 11th. The participants will be seeking a new international agreement on climate with a goal of holding global warming below 2°C (3.6°F) relative to pre-industrial temps. Can they do it? Yes, but will they?

If history is a guide, the odds are 50/50, maybe 25/75. However, this time history may be a poor guide because the pressure to accomplish an agreement has never been more pronounced, more eagerly sought, or more crucial. It’s almost a given that “something must be done fast.” Just ask any legitimate climate scientist.

“We are the first generation to really become aware of the problem and yet the last generation that can deal with it,” Laurent Fabius, President COP21 and minister of Foreign Affairs and International Development, France.

However, “the world is always perceived as dual between rich and developing countries. The latter perceive the climate issue as an obstacle to their development [nevertheless] simply put, if no action is taken the temperature can rise up to 4.8C by 2100, according to the IPCC,” The COPO21 in Paris: Will it be a Success or a Failure? One Europe, Feb. 14, 2015.

If such is the case, i.e., no action, over time the world will never be the same as it is likely hordes of people crowd together at higher latitudes, warmongering is almost guaranteed.

As for a preview of COP21, here’s the perceived result of COP20, which was held in Lima in December 2014: “As COP20 comes to a close, the members of the UNFCCC (UN Framework Convention on Climate Change Women and Gender Constituency), representing hundreds of thousands of women and men from around the world, respond to the failure of the Lima outcome to reflect the urgency of the climate crisis… COP failed to move substantially forward towards the ultimate goal of agreeing on a plan to avert climate catastrophe,” Global Education Magazine, Dec. 20, 2014.

So it goes, “COP21 will be remembered either as a global turning point in the transition towards a low-carbon civilization or a tipping point towards runaway climate change,” Energy Studies Institute, Policy Brief, April 21, 2015.

Furthermore, according to Energy Studies Institute, if COP21 fails to deliver, the already declining faith of the general public in international negotiations will be dealt a severe blow. In that regard, the biggest challenge as of today is “the architecture for an agreement remains to be determined.” Exhale: Purportedly, it is starting to come into focus.

To gain insight into the upcoming COP21 proceedings, one of the best sources is New Climate Institute/Germany, an internationally recognized organization that provides flagship projects to track and analyze climate change efforts.

As of August 1, 2015 twenty-two countries have submitted INDCs. Of those countries, which have not yet filed, the biggest challenges are “difficulty with engaging relevant stakeholders,” followed by “lack of internal agreement on desired ambition level.”

All of this background work aims to produce a climate agreement to limit temperature increases below 2°C based upon pre-industrial levels. Anything above 2°C will ring all kinds of nasty bells and toot hideous whistles. Nevertheless, in point of fact, the ecosystem is already demonstrating a preview of numerous awful events whilst temps are not even one-half way to the 2°C limit.

But, is 2°C itself too high of a limit? If so, then “lights out” is about to take on a whole new connotation, kind of like the double entendre of climate change as the risqué aspect becomes truly bawdy. If that does not sound too good, it is not!

In April 2014, the Intergovernmental Panel on Climate Change (IPCC) concluded that in order to stay below the 2°C limit, global greenhouse-gas emissions (“GHG”) would have to decline between 1.3% and 3.1% each year, on average, between 2010 and 2050.

Decline? The opposite is occurring. Global emissions increased by 1.5%/yr. from 1973-2000. Since then, emissions have increased by 2.6%/yr. from 2000-2014 (Hansen), an increase of 73% over the prior decades. This is going in the wrong direction. Who knows, the emissions decline may end up as a practical joke, but it must be done, or the situation is going to heat up real fast.

After all, well before hitting the diabolical 2°C level, the ecosystem, in many respects, is nearly on its back. Lots of noise is coming from everywhere nobody goes.

Mass Mortality Events, dead animals found worldwide, especially in the seas, are nearly at an epidemic stage (ABC News, “Mysterious Mass Animal Deaths All Over the World,” May 19, 2014,).

The oceans absorb 90% of planetary heat and 30% of the CO2. Can marine animals handle it? Maybe not. Again, ecosystem collapse is happening where nobody goes, meanwhile ocean acidification is rampantly 10 times faster than ever, and as a result, pteropods at the very base of the marine food chain are just now starting to struggle to reproduce and mature. Yes, the base of the food chain.

Rising sea levels are already impacting America. The Outer Banks, North Carolina is down to 25% its original width in some areas of the 200-mile long string of narrow barrier islands, and the famous Highway 12, a National Scenic Byway, buckles and washes away all too often. More than fifty thousand people reside there.

According to a new study, as of August 27th, 2015, “NASA Zeroes in on Ocean Rise: How Much? How Soon? It’s pretty certain we are locked into at least 3 feet of sea level rise, and probably more.” However, they do not yet know the timing. Really, how could they? But, “locked in” doesn’t sound too good. NYC? Outer Banks?

At present “effects that scientists had predicted in the past would result from global climate change are now occurring,” NASA, Global Climate Change, Vital Signs of the Planet. No surprise here as the hottest years on record have occurred since 2000.

Here’s the bigger uglier picture: According to reputable sources, there’s probably no way to stay under 2°C. In fact lamentably, the paleoclimate record indicates Earth once experienced a 5°C increase within a couple of decades, but nobody knows exactly why. Something earthshattering must have occurred. Today’s anthropogenic forces on the climate, like CO2, may also be earthshattering. Time will tell soon enough, maybe too soon. Nobody really knows for sure because global warming is brand new to humankind.

Beyond that, with GHGs turbocharging 135% faster than 40 years ago at a rate of 2.0ppm/yr. (Hansen), simple math says big trouble will likely hit by, or before 2040-50. After all, emissions and GHGs are growing exponentially.

Dr. James Hansen claims, in a court filed document, the paleoclimate record indicates enough warming occurs at 450ppm that it could melt most of Antarctica, containing 85-90% of the world’s ice, but it would take a long, long time. Meanwhile, along the way, the incoming would destroy coastlines and flood coastal cities. CO2 at 400ppm now is increasing 2.0ppm/yr. times 25 equals 450ppm in 2040.

Will COP21 save the ecosystem soon enough? Will the COP21 come to agreement?

By all appearances, and according to factual record, years and years of COP meetings have yet to meld countries together into one unified blend of “let’s fight this.” Considering the enormous challenge in organizing 190 countries around one single goal, the competing interests are beyond the scope of this article and beyond the imagination of even the sharpest diplomat.

Yet already, whilst still below the 2°C marker, a bevy of horrid things are already starting to appear that could make life brutally miserable well before many of the COP21 delegates celebrate retirement and try to find a nice sandy beach that hasn’t already washed away. more