How much should the Chief Executive Officer of a company be paid?

Before we attempt to answer that question, let's see how much CEOs are paid. Back on 15 April 2014, Forbes reported on a "study" released by the AFL-CIO, once a significant labor organization in the United States, but now mostly a political fundraising operation for leftist causes:

With CEO compensation analysis season in full swing, the AFL-CIO released data this morning stating that American CEOs in 2013 earned an average of $11.7 million–an eye-popping 331 times the average worker’s $35,293.

Though down from 2012's 354-to-1 CEO-to-worker pay ratio, the multiple more than doubles when compared to minimum wage workers; the average CEO in 2013 out-earned this group 774 times over.

We put "study" in quotes because the sample for the AFL-CIO's "research" consisted of 350 of the largest companies in the U.S., out of a total of 27,092,908 firms, which means they cherry-picked the available data for the CEOs of the largest and most successful firms with the most revenue. Meanwhile, the U.S. Bureau of Labor Statistics collected the data for some 248,760 CEOS at companies of all sizes and levels of success, finding that the average pay of a CEO was $178,400.

The question of how much a CEO is really worth to a company is one that you might think would be difficult to answer, but which under special conditions turns out to be a lot easier than you might think. And by "special conditions", we're referring to the unique situation that happens at some companies when they announce a surprise change in their top leadership, where they replace their CEO.

There was one such example earlier this week, when McDonalds CEO Don Thompson announced he was stepping down after two years of running the fast food giant. The company had struggled under his leadership, with the company's revenues stuck in neutral and its stock barely treading water, even as the rest of the S&P 500 had risen by 47% in the same economic environment.

So when the news was announced before the stock market opened on 29 January 2015, it was very interesting to see that the company's shareholders reacted to the news that Johnson had resigned as CEO and would be replaced by Steve Easterbook by boosting the company's stock price from a closing value of $88.78 per share on the day before to $91.50 per share at the opening bell. 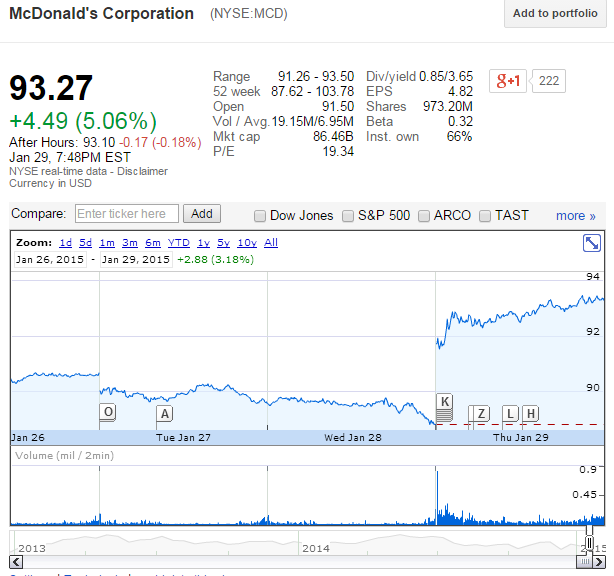 That represents a gain of $2.72 per share, which when multiplied by the company's outstanding 973,200,000 shares, suggests that they collectively believe that getting the right man to turn the company's fortunes around to do the CEO job at McDonalds is worth about $2.647 billion dollars. 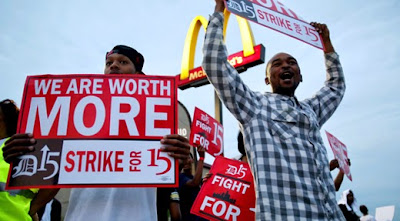 By contrast, Thompson's total compensation in 2013 was $9.5 million. If McDonald's new CEO is paid twice that figure and succeeds in growing McDonald's business, it can be reasonably argued that he's being underpaid for the value he brings to the company.

And that's the thing - it's up to the CEO to deliver that kind of value to the owners of business. A CEO who doesn't deliver is almost always overpaid.

By the way, the exact same logic applies for the lowest paid employee on the company's payroll too. If they cannot deliver value to the company in excess of what they cost the company in pay, benefits and administrative expenses, they're overpaid.

The difference is that the responsibility of delivering the kind of value demanded of a CEO by the company's owners is something that is far beyond the job responsibilities of much lower ranking employees. Which is why they're paid so much in the first place.