As a starter, consider the current consensus view of the ongoing strong recovery in the sector.

All data not seasonally adjusted, so we are looking at y/y changes here.

First in terms of Volume of Production (excluding inflationary effects):

Now, in terms of Value of Production (including inflation):
Chart to illustrate: 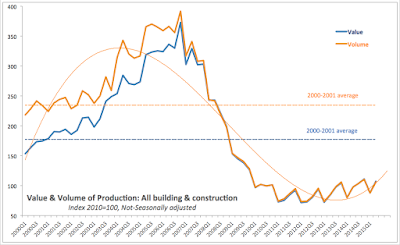 Conclusions: overall, the recovery rates in the sector have been driven (to-date) by the low base from which the recovery is taking place. Double-digits growth is hardly inspiring when it happens in an environment where actual levels of activity are massively below where they were 15 years ago. That said, growth is better than contraction.