For all the positivity chatter about the return of the U.S. growth and 'normalisation' of the interest rates environment pushed into the world of unsuspecting journos by the IMF in its latest WEO Regional Outlook: Western Hemisphere, there is a nagging suspicion that something is strangely amiss.

Take the pesky problem of the U.S. monetary policy being exceptionally loose (or accommodative) since 2008. Chart below shows this by plotting a rate gap between policy rate and the 'neutral rate' with negative values indicating accommodation. Note, neutral rate is defined as the rate consistent with the economy achieving full employment and price stability over the medium term. Note also that adding in QE (over and above simple policy rate) pushes the metric of accommodation well beyond all historical comparatives in size (depth) and duration (length of time accommodation is present): 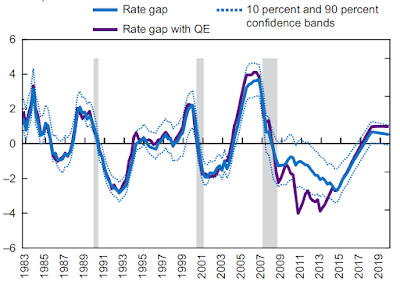 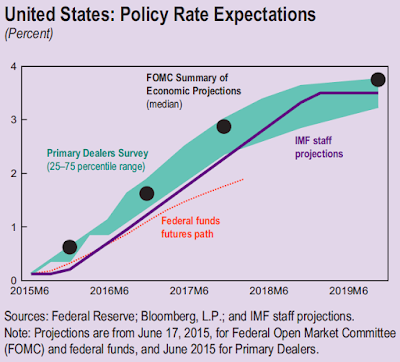 But here is a pesky little thing: You won't spot the same dynamics in IMF WEO forecast for either inflation or Libor rates. And the reason is pretty obvious: the more aggressive the Fed path in the chart above, the lower are growth projections in the chart below: 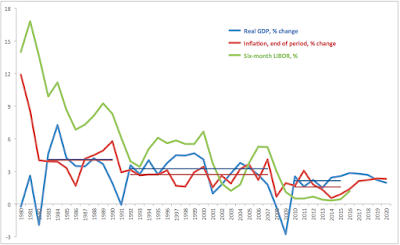 In simple terms, despite all the talk about 'normalisation' of rates, the IMF is really saying that through 2020, we can expect the monetary environment (and with it the interest rates outlook) to be more benign than over pre-crisis average. Worse, inflation is expected to accelerate even though growth is expected to slip.

In short, IMF expectations on both Libor and the Fed rate can be very tight.  Especially over the 2016-2018 horizon. If the Fed does stick to its signalled path (chart 2 above), growth will suffer relative to IMF projections (last chart above), despite already heading toward 2010-2015 average by 2019.

In the mean time, none of the IMF forecasts are consistent with Fed policies addressing in any reasonable way the built up of monetary policy excesses of the past.

Welcome to the world of forecasting after ZIRP. Shall we call it Fudge?..