Recently, I posted some data from the IMF Fiscal Monitor for October 2015 comparing fiscal performance of Iceland and Ireland and showing the extent tp which Iceland outperforms Ireland in terms of fiscal deficits and Government debt metrics. You can see the full post here.

We are not going to dwell on the gargantuan (20%+) GDP/GNP spread or the fact that Irish Domestic Consumption per capita is nowhere near pre-crisis peak (see here). In pure real GDP per capita terms, Iceland is doing as well or as badly as Ireland so far. 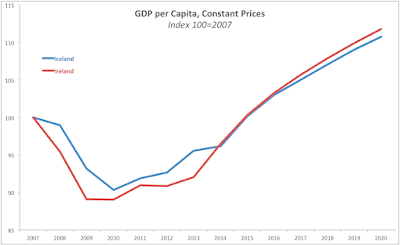 The same applies to GDP per capita expressed in current prices and adjusted for differences in exchange rates and price levels (the Purchasing Power Parity adjustment). Iceland is at 112.9 index reading in 2015 forecast, Ireland at 113.1 index reading. For 2016, Iceland is forecast to be around 117.5, Ireland at 117.8. Neck-in-neck.

However, when it comes to the labour market performance, the close proximity between two countries vanishes. 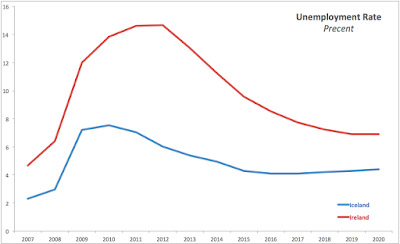 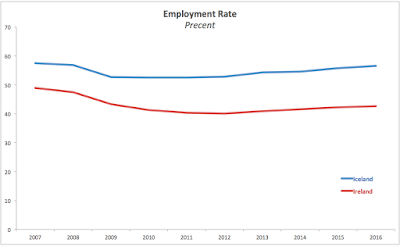 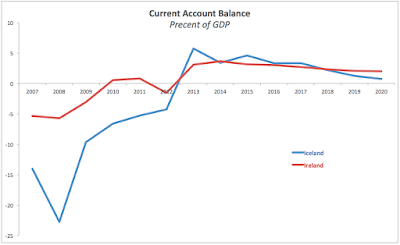 Table below summarises the sheer magnitude of positive adjustments to pre-crisis and crisis worst points of performance on all metrics above, through 2015 for both countries:


The evidence above is sufficient to reject the claims that Ireland outperforms Iceland in recovery.