We don't comment on the analysis posted at ZeroHedge very often, as many of the contributions to the site have a very high noise to signal ratio, but we have to tip our hats to the Tyler Durdens because they've helped answer a question we've had about the internal market mechanics that are needed to drive a Lévy Flight Rally.

A Lévy flight is perhaps best described as a random walk where the otherwise random path an object takes as it moves is periodically punctuated by sudden, large movements. That's very different from a typical random walk, also called Brownian Motion, where the variation in the magnitude of movements might be described by a normal distribution.

Going by that frame of reference, the large movements of a Lévy flight would therefore be highly unlikely, and therefore, unpredictable. Or as a mathematician might describe the bell curve associated with the distribution of a Lévy flight, they have much fatter tails than do typical normal distributions.

But then, the stock market is well known for its sheer number of improbably fat-tailed events. A good example is the recent rally that took place between 29 September 2015 and 5 October 2015. Here, we had observed in our model of how stock prices work as the transition from investors being focused on 2016-Q1 to instead be focused on 2016-Q2 (or Q3). 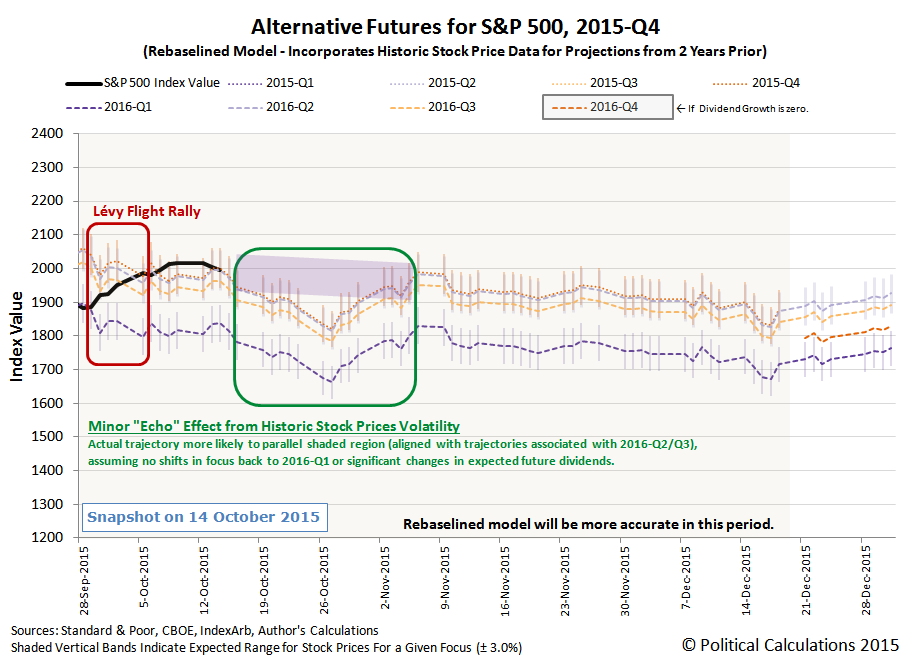 We could easily understand how stock prices could crash in a Lévy Flight event, as might happen when investors suddenly shift their focus from a future quarter with more positive prospects for their investments to a different future quarter with more negative prospects. All that takes is an increased demand to sell in a market environment with reluctant buyers considering a negative sentiments for the future prospects of their newly acquired holdings. But why would that sentiment suddenly reverse to power stock prices up at a much faster pace than markets rise during boom times? Especially in the absence of positive news for the market.

And that's where ZeroHedge's analysis by actual market traders becomes invaluable. They dug into the "savage reversal" and found a rather amazing amount of short covering, where investors who had speculated too far to the negative side of the market during the Lévy Flight crash that preceded the rally were force to cover their short investments by buying up shares - especially of the stocks they were most seeking to sell short. 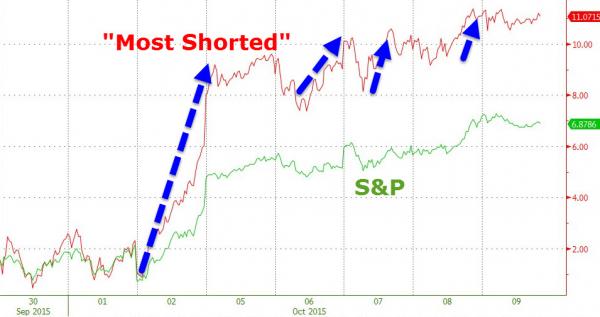 We see then that a very large short squeeze played a very large role in driving stock prices back up so quickly. Better still, in the days following the rally, the Tyler Durdens also documented which stocks were the most "hated", as measured by the percentage of their floating shares being shorted, going into the rally.

And though our model of how stock prices work allows us to determine in advance where stock prices will go during a Lévy flight crash or rally, we're still learning what it takes for stock prices to actually make those quantum shifts during such "fat-tailed" events.

Welcome back to the cutting edge!

One final note - in our chart showing the alternative future trajectories of stock prices above, since our model incorporates historic stock prices, its projections of future stock prices can be affected by the volatility associated with them, which we refer to as the echo effect. To account for that factor in upcoming days, we've simply drawn a straight line (the purple shaded region) across the period where we observe that our model's projections are most affected by larger than typical volatility in those historic stock prices.