Going by the number of publicly-traded companies that acted to cut their dividends in January 2015, the U.S. economy didn't just experience recessionary conditions during the month. Instead, it outright contracted. 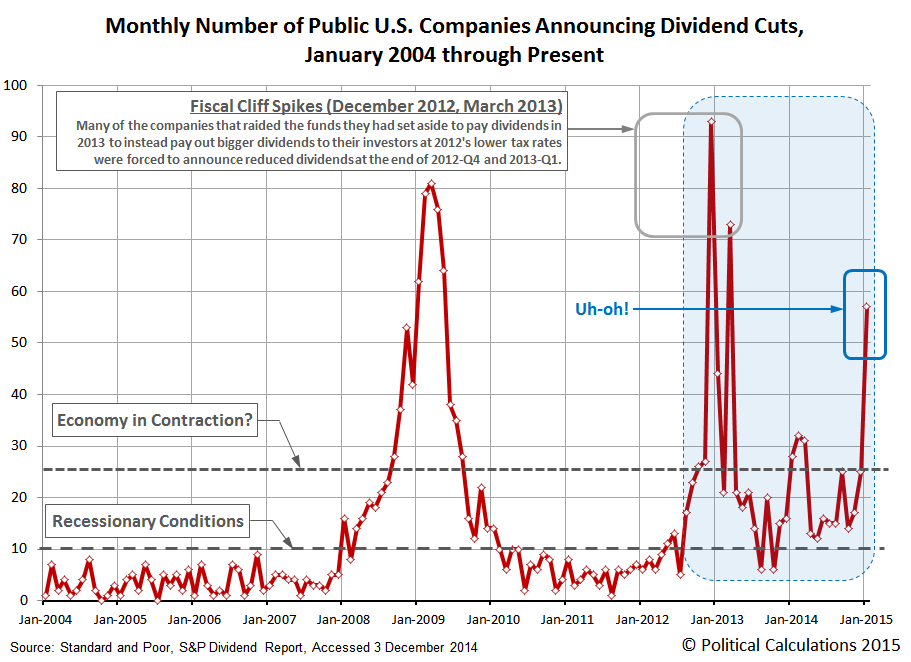 Or perhaps a better description of what happened is that the U.S. oil industry's efforts to push its luck as far as it could has run out of good luck to push.

By that, we're referring to the consequences of falling oil prices, which are forcing an increasing number of companies tied to oil extraction activities in the United States to take the dramatic step of slashing their dividends. With 57 U.S. companies taking that action in January 2015, the number of companies taking that action in a single month is consistent only with previous months in which the U.S. economy either experienced contraction or in response to major dividend tax rate hikes.

January 2015 saw no major tax rate hikes on dividends, so contraction it is.

We think the sudden increase in the number of companies cutting their dividends represents something of a delayed reaction on the part of many firms, which we suspect hoped to be able to ride out the halving of crude oil prices in the second half of 2014 through the end of the year. As such, the best case scenario going forward would be for a declining number of companies to cut their dividends in each of the next several months ahead. A worst case scenario would have the number of dividend cutting companies increase in that time frame.

We should note that the action of cutting dividends is never taken lightly by a company's leadership, given that it can significantly disrupt the expected earnings of many of the people who own and run such firms, where dividends can represent a substantial portion of their annual incomes. Cutting dividends is typically only done when firms lack both the positive earnings and cash flow needed to sustain cash dividend payments at the levels they've previously promised. With that being the case, when a company cuts its dividends, it is confirming that its business prospects have definitively turned for the worse without the potential for a rapid recovery in the near term.