Irish manufacturing and services PMIs have been released by Markit, covering October.

On Manufacturing PMI side, there has been some improvement in growth conditions in the manufacturing sector, with faster growth in new business, offset by softer production growth. IrishManufacturing PMI posted a reading of 53.6 in October, down marginally on 53.8 in September. Per Markit: “Business conditions have now strengthened in each of the past 29 months. The rate of expansion in manufacturing production continued to ease in October, the third successive month in which a slowdown has been recorded. The latest rise was the weakest since February 2014, but higher sales, in a number of cases from export markets, supported continued output growth.” In other words, MNCs activity is once again the suspect key driver for continued growth in the sector, not that Markit would say so outright. 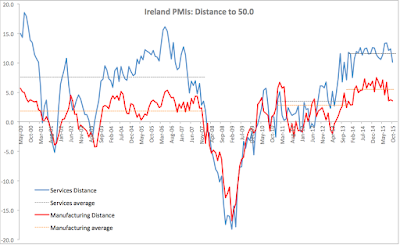 Per Markit: “Although [October reading] signalled the weakest expansion in activity since February 2014, the rate of growth remained elevated as higher new business continued to lead to rising output.
Business sentiment remained strongly positive, with panellists predicting that new orders would continue to increase over the coming year, leading to further growth of activity. Improvements in wider economic conditions were also mentioned by those panellists forecasting higher output. That said, sentiment dipped to the weakest since August 2014. The rate of growth in new business eased further in October and was the weakest since March.” 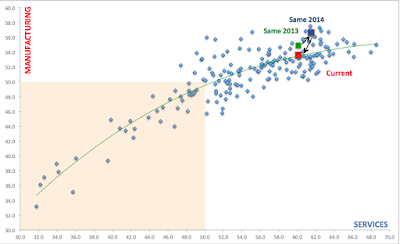 As chart above shows, both services and manufacturing sectors continue to perform well ahead of historical comparatives, but on-trend in terms of growth balancing between two sectors. “Excess’ growth in Manufacturing, evident in October 2013 and 2014 data has eased, while accompanying moderation in growth in Services was somewhat weaker. Again, all indications are - exporting sectors are driving growth, dominated by MNCs, though domestic internal demand is also supporting expansion.