Every three months, we take a snapshot of the expectations for future earnings in the S&P 500 at approximately the midpoint of the current quarter. Today, we'll confirm that the earnings recession that began in the fourth quarter of 2014 has continued to deepen. Again. 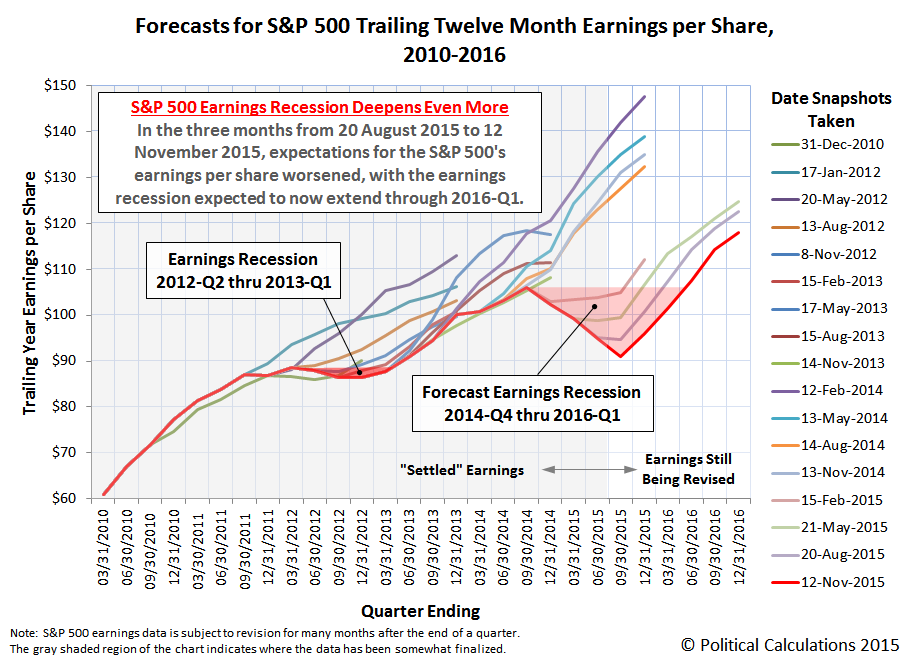 In the chart above, we confirm that the trailing twelve month earnings per share for the S&P 500 throughout 2015 has continued to fall from the levels that Standard and Poor had projected they would be back in August 2015. And for that matter, what they forecast they would be back in May 2015, February 2015 and in November 2014.

The deterioration in the S&P 500's earnings per share has finally drawn the attention of Reuters, which notes that the earnings of U.S. companies in the third quarter, which were just reported, were the first to be outright negative as opposed to being less and less positive.

S&P 500 earnings are on track to close their first reporting season of negative growth since the Great Recession and estimates call for sub-zero growth in the current quarter as well.

The previous recession in the S&P 500's trailing year earnings per share, which ran from 2012-Q2 through 2013-Q1, coincided with economic growth in the U.S. economy stalling out to near-zero levels, a fact that has become more and more apparent with each year's comprehensive revisions to the nation's GDP, where estimates of the real growth rate have been consistently reduced below their originally reported figures.

The current trailing year earnings recession is of a considerably greater magnitude. We would therefore expect to see larger downward revisions in estimated GDP growth for the period from 2014-Q4 through at least 2016-Q1 as the U.S. Bureau of Economic Analysis' annual GDP revisions are released.