We are currently working on a project where we're seeking to correlate large changes in the value of the S&P 500 with the timing of announcements of dividend cuts during the so-called "Great Recession". As part of that project, we've generated some charts that are interesting in and of themselves, which we're sharing today!

Our first chart indicates the number of dividend cuts per day that were recorded in the Wall Street Journal's Dividend Declarations database spanning the period from 1 June 2007 through 31 December 2009 - basically the period of time from six months before the official beginning and after the official end of the Great Recession. 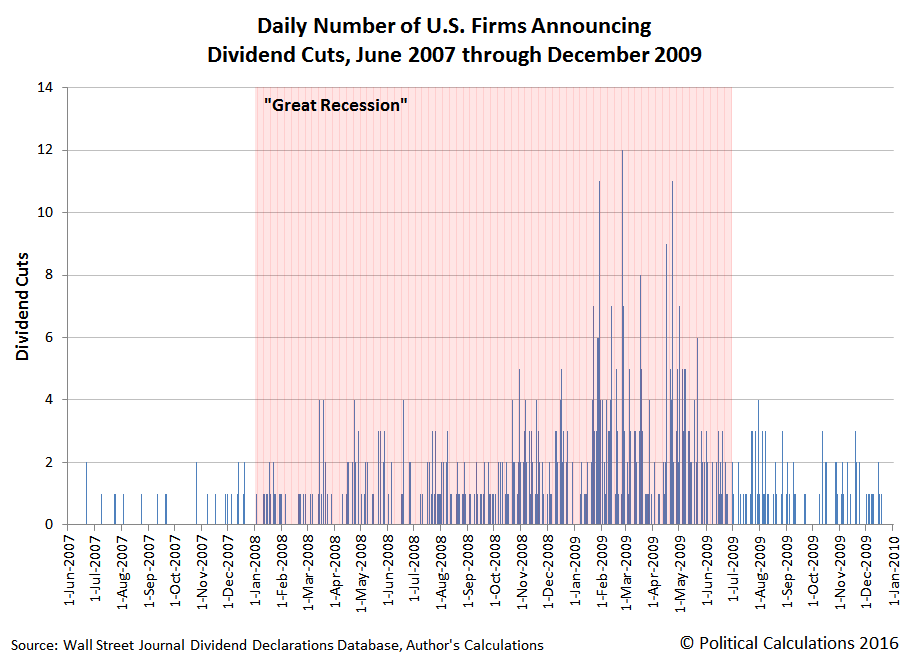 In our chart above, we've shaded the period from January 2008 through June 2009 to indicate the period of the Great Recession, but not December 2007, the month they identified as the official beginning of the recession. The reason why has to do with how the National Bureau of Economic Research defines a period of economic contraction, where it marks the beginning of a recession by identifying the month where the preceding period of economic expansion peaked.

In our second chart, we calculated the 30-calendar day rolling total of the number of dividend cuts being announced throughout our full two-and-a-half year period of interest, which gives a pretty good indication of how the overall level of distress in the U.S. stock market evolved throughout that time. 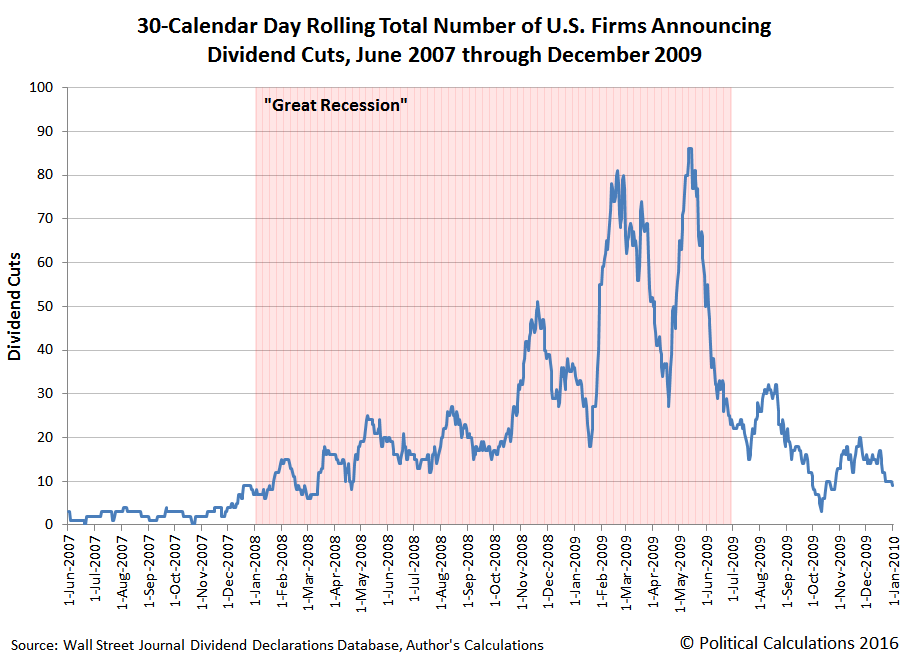 A quick note about the data. The WSJ's dividend declarations database only provides data capturing the day-to-day announcements of U.S. firms going back to May 2007, so we're not able to extend our detailed analysis further backward in time to capture previous periods of recession. In addition, while the WSJ's database does capture a large sample of those announced dividend cuts, it does not capture the entire population.

Beyond that, we know from our experience in tracking announced dividend cuts recorded by Seeking Alpha's Market Currents dividend news reports that dividend declarations in the WSJ's database may be recorded with as much as a one-to-two trading day lag from when they were actually announced, so we're mindful of that potential factor in our project.

On the plus side, the WSJ's Dividend Declarations database does tell us which firms announced dividend cuts as well as how big those dividend cuts were, which for our purposes, is especially significant information.