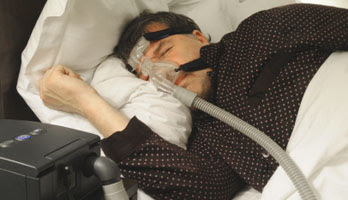 People who suffer from sleep apnea don't have very many good options to cope with the condition.

The Mayo Clinic describes sleep apnea as "a potentially serious sleep disorder in which breathing repeatedly stops and starts." Aside from preventing people with the disorder from obtaining a good night's sleep, which leads to daytime fatigue, more severe forms of the condition can lead to host of more severe medical problems that result from having their body's consumption of oxygen interrupted, including high blood pressure, heart problems, an increased risk of stroke, Type 2 diabetes, metabolic syndrome and liver disease.

Treating more severe cases of the condition often involve the patient being prescribed to use a Continuous Positive Airway Pressure (CPAP) machine. Here, the patient straps a bulky mask and its connecting air hoses over their nose and mouth while sleeping, which if you can tell from the picture, doesn't appear to offer much in the way of comfort, even though they are effective in promoting uninterrupted breathing.

Via Core77, we learned of a new alternative device invented by Stephen Marsh that does away with much of the CPAP's bulky apparatus, reducing it to a relatively simple nosepiece that doesn't need to be hooked up with hoses to an air pump: the Airing:

But there's a catch. The Airing nose fitting device is only good for a one-time use, while a traditional CPAP machine is good for a number of years. If an individual with sleep apnea wanted to use the Airing as they slept each night, they would have to buy a supply that they would consume at a rate of one per day, at an estimated retail cost of $3.00 per device, which compares to the average expense of $850 for a CPAP machine, which typically last for 7 to 8 years before needing to be replaced.

We wondered which option would make more financial sense. It occurred to us that the choice is really the same as the choice of buying versus renting, which is a kind of math that we're very familiar with doing.

In the tool below, we've set the annual cost of "renting" as the choice to go with the Airing device, at it's estimated retail price of $3.00 per unit, times 365 days per year. The cost of buying then would be the $850 for the traditional CPAP machine.

We then set the inflation rate to 2.03%, which agrees with the OECD's long term projections for 7-8 years from the present, which covers the expected life of the CPAP unit.

Meanwhile, we set the cost of money to be equal to the current 13.1% that Bankrate.com indicates to be the average for a fixed-rate credit card.

All that said, let's do the math. If you're accessing this article on a site that republishes our RSS news feed, please click here to access a working version of the tool on our site.

With our default numbers, we find that it would be more financially advantageous for a sleep apnea sufferer to choose the CPAP over the Airing device.

Playing with the numbers, we found that the cost of the CPAP machine would have to exceed $9,900 in order for the Airing to become more advantageous from a cost perspective. Alternatively, the price of the Airing would have to drop to $0.25 per unit in order for it surpass the value of a CPAP.

That assumes that the nose fitting device would have to be disposed of daily. If the effective life of the Airing unit could be extended to last for 2 weeks, at an increased cost of $3.60 per unit, it would outmatch the average CPAP unit from a pure cost perspective.

But cost is not the only perspective to consider. If sleep apnea-afflicted consumers find that the greater comfort of the Airing nose fitting device is superior enough with respect to that of a CPAP machine while providing similar improved breathing as they sleep, then we can put a value on how much a night of uninterrupted breathing in greater comfort is really worth to someone with sleep apnea. It would be the difference between the estimated $3.00 retail cost of the Airing and its competitive-to-CPAP cost of $0.25 per unit, which works out to be $2.75 per night, or a little over 34 cents per hour (assuming 8 hours of sleep per night).

And to think - people without sleep apnea have no idea how much their uninterrupted breathing is actually worth!