Irish Manufacturing and Services PMIs for January were published earlier this week and are worth looking into as a signal for the underlying economic activities at the start of 1Q 2016.

Irish Manufacturing PMIs rose for the second month in a row in January, reaching 54.3 from 54.2 in December. This is the highest level of activity since July 2015 and confirms some reversal of PMIs dynamics from slower growth recorded from August 2015 through November. Of course, when we are talking about ‘slower growth’ we are talking about still very high rates of expansion as singled by PMI. 3mo average through January 2016 is at blistering 53.9, which is up on scorching 53.7 3mo average through October 2015 and down on scorching 56.1 3mo average through January 2015. These telephone numbers compare extremely well against the historical average of 51.0 and even post-crisis average of 53.0.

Per Markit: “Business conditions in the Irish manufacturing sector improved solidly at the start of 2016, as had been the case at the end of 2015. A sharp and accelerated expansion in new orders was the key driver of strengthening conditions, with output and employment also continuing to rise. Lower raw material costs led to the sharpest fall in input prices in three months, while output charges decreased for the first time since last October… The health of the sector has now strengthened in each of the past 32 months.”

Notably, per Markit: “The decrease in output prices ended a two-month sequence of inflation” which is suggesting that Irish producers are now contributing to downward pressures in Euro area markets.

Meanwhile, Irish Services PMI also rose robustly in January, reaching 64.0 against 61.8 in December 2015. Again, these are unbelievably strong  numbers that raise some serious questions about the survey methodologies and/or coverage, but more on this later. 3mo average Services PMI for Ireland was at 61.5 in 3 months through October 2015 and rose to 63.1 in 3mo period through January 2016, up on already unbelievable 62.2 for the 3 months through January 2015. Historical average of 54.9 - again, extremely strong by any measure - is in the dust.

Per Markit, Services PMI “signalled the sharpest expansion in services output since June 2006. Activity has now risen in each of the past 42 months. Companies expect further improvements in economic conditions over the coming 12 months to lead to growth of activity. Business sentiment picked up slightly at the start of 2016. The rate of expansion in new business also quickened in January, and was the joint-fastest since August 2000. New orders have risen continuously throughout the past three-and-a-half years. As has been the case throughout the past four-and-a-half years, new export business rose in January. Moreover, the rate of expansion accelerated from that seen in December. … Consequently, employment rose at a substantial pace during January and one that was sharper than seen in the previous month. A further sharp rise in input costs was recorded in January, as the effect of higher wages and salaries outweighed the downwards impact of lower fuel costs. The rate of inflation across the service sector ticked up marginally, remaining above the series average.” 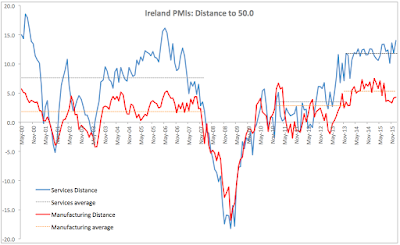 As per chart above, both Services and Manufacturing sectors are now in a massive expansion, with rates of growth in the underlying activity well in excess of those historically anchored in the pre-crisis period. Services divergence toward higher growth is still being contrasted by lagging growth in Manufacturing, but signs of possible catching up in Manufacturing to the upside are also present. 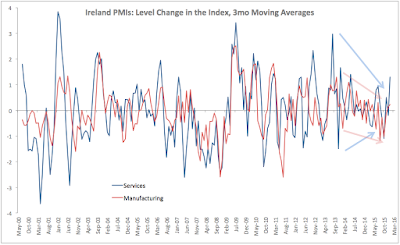 Per chart above, we can confirm new growth trend in Services and the potential for sustained growth acceleration in Manufacturing (albeit no new trend yet). 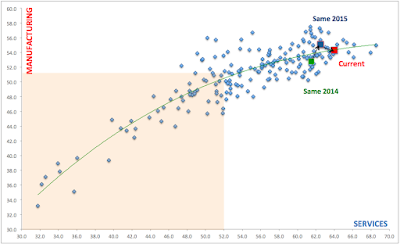 Per chart above, both sectors of the Irish economy are operating at the margins of economy’s potential (judging by historical trends). This is hard to interpret as an organic shift in potential rates of growth, so most likely, we are going to witness some growth moderation in months ahead.

Still, current performance raises serious questions as to where this data is coming from. It has long been suspicion of this author that the surveys dynamics have been driven by multinational enterprises operating in both sectors. We have no confirmation of this nor denial of this from Markit and we do not know the quality of their coverage across two sectors. However, one has to be aware of the simple fact - as shown on this blog in the past, survey results have been (in the past) deeply out of line with actual underlying activity registered in the sectors. Currently, both Services and Manufacturing indices are running fairly closely correlated with the reported activity in these sectors, but past low correlations with GDP and GNP and sectoral value added metrics suggests that the survey base can be skewed in favour of unweighting MNCs.