At the end of the last week of January 2016, stock prices rallied on the news that the Bank of Japan would implement negative interest rates in that country and that the Fed was likely to back off its plans to hike interest rates again before the end of 2016-Q1. 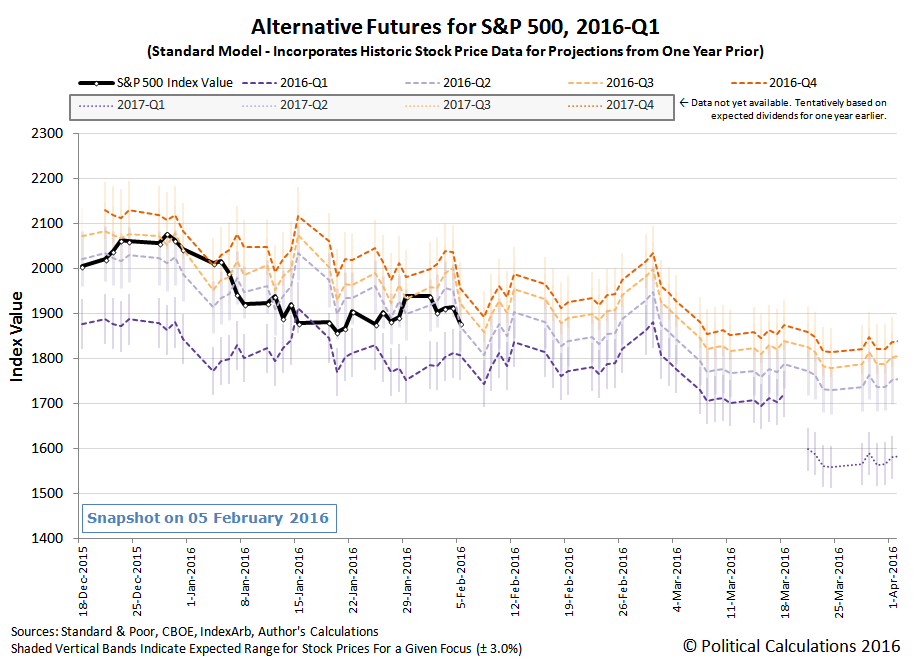 Click here to see what this chart looked like last week. Here are the main news events that drove the outcome we see in the chart above.

Let's discuss some of the dynamics that were at work in the market during the week. First, the fall of stock prices on Tuesday, 2 February 2016 in response to ExxonMobil's earnings news.

Here, the worsening of the expected outlook for U.S. oil producers caused investors to focus more on the nearer term because of the impact that change would have on that industry and because of the timing of when that impact would be felt. As it happened, the oil companies that reported earnings in the first week of February 2016 consistently indicated that they were also cutting back on their planned capital investments, indicating that they see little prospects for growth ahead, and one, ConocoPhillips (NYSE: COP), went so far to cut its dividend too.

At the beginning of this article, we stated that as of Friday, 5 February 2016, investors were splitting their forward-looking attention between 2016-Q1 and 2016-Q2, although if you look closely at our chart, it would appear that investors were tightly focusing their attention to 2016-Q2.

The only reason it appears that way is due to our use of historic stock prices as the base reference points from which we project the alternative trajectories of future stock prices, where the echoes of the market's activity from 13 months ago, 12 months ago and 1 month ago contribute to our projections. In this case, the echoes of that past volatility makes it appear that investors are closely focused on 2016-Q2 in our model, rather than splitting their focus between 2016-Q1 and 2016-Q2. (The quick and easy way to confirm that assessment is to simply connect the dots for each of the alternative trajectories on each side of the volatility indicated by the short term echo event.)

Finally, on an upcoming programming note, we plan to follow up our post last week where we sought feedback from readers on Seeking Alpha on how to exploit the kind of information our futures-based model can provide later this week.