Recent media and analysts coverage of the global economy, especially that of the advanced economies has focused on the rising degree of uncertainty surrounding growth prospects for 2016 and 2017. Much of the analysis is shlock, tending to repeat like a metronome the cliches of risk of ’monetary policy errors’ (aka: central banks, read the Fed, raising rates to fast and too high), or ‘emerging markets rot’ (aka: slowing growth in China), or ‘energy sector drag’ (aka: too little new investment into oil).

However, the real four horsemen of the economic apocalypse are simply too big of the themes for the media to grasp. And, unlike ‘would be’ uncertainties that are yet to materialise, these four horsemen have arrived and are loudly banging on the castle of advanced economies gates.

The four horsemen of growth apocalypse are:

In this world, sub-zero interest rates don’t work, fiscal policies don’t work and neither supply, nor demand-side economics hold any serious answers. Evidence? Central bankers are now fully impotent to drive growth, despite having swallowed all monetary viagra they can handle. Meanwhile, Government are staring at debt piles so big and bond markets so touchy, any serious upward revision in yields can spell disaster for some of the largest economies in the world. More evidence? See this: http://trueeconomics.blogspot.com/2015/10/101015-imf-honey-weve-japanified-world.html.

To give you a flavour: consider the ‘stronger’ economic fortress of the U.S. where the Congressional Budget Office latest forecast is that the budget deficit will rise from 2.5 percent of GDP in 2015 to 3.7 percent by 2020. None of this deficit expansion will result in any substantive stimulus to the economy or to the U.S. capital stocks. Why? Because most of the projected budget deficit increases will be consumed by increased costs of servicing the U.S. federal debt. Debt servicing costs are expected to rise from 1.3 percent of GDP in 2015 to 2.3 percent in 2020. Key drivers to the upside: increasing debt levels (debt overhang), interest rate hikes (monetary policy), and lower remittances from the Federal Reserve to the U.S. Treasury (lower re-circulation of ‘profits and fees’). Actual discretionary spending that is approved through the U.S. Congress votes, excluding spending on the entitlement programs (Medicaid, Medicare and Social Security) will go down, from 6.5 percent of GDP in 2015 to 5.7 percent of GDP by 2020.

Boom! Debt overhang is a bitch, even if Paul Krugman thinks it is just a cuddly puppy…

Recently, one hedgie described the charade as follows: ”I like to use the analogy that the economic patient is riddled with cancer — central banks are applying a defibrillator, but there's only so much electricity the patient can take before it becomes a burnt-out corpse.” Pretty apt. (Source: http://www.businessinsider.com/36-south-four-horsemen-2016-2?r=UK&IR=T)

My favourite researcher on the matter of financial stability, Claudio Borio of BIS agrees. In a recent speech (http://www.bis.org/speeches/sp160210_slides.pdf) he summed up the “symptoms of the malaise: the “ugly three”” in his parlance: 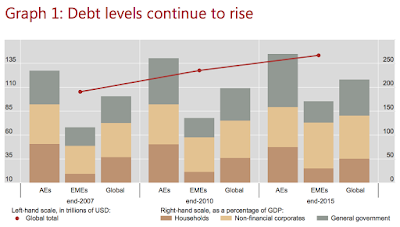 The fabled deleveraging that apparently has achieved so much is not dramatic even in the sector where it was on-going: non-financial economy, for advanced economies, and is actually a leveraging-up in the emerging markets: 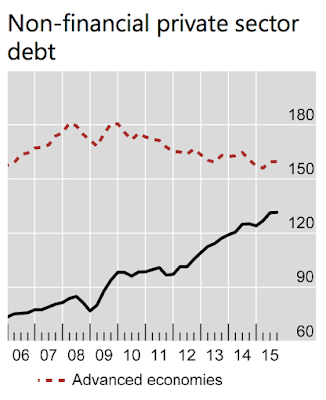 And these debt dynamics are doing nothing for corporate profitability: 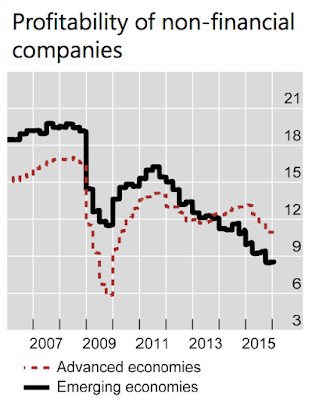 Worse, what the above chart does not show is what the effect on corporate profitability will interest rates reversions have (remember: there are two risks sitting here - risk 1 relating to central banks raising rates, risk 2 relating to banks - currently under severe pressure - raising retail margins).

Boris supplies a handy chart of how bad things are with productivity growth too: 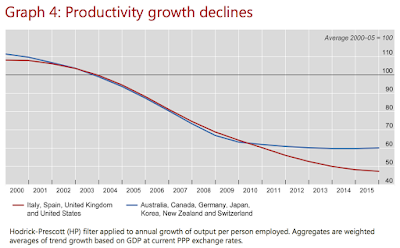 The above are part-legacy of the Global Financial Crisis. Boris specifies: Financial Crises tend to last much longer than business cycles, and “cause major and long-lasting damage to the real economy”. Loss in output sustained in Financial Crises are not transitory, but permanent and include “long-lasting damage to productivity growth”. Now, remember the idiot squad of politicians who kept droning on about ‘negative equity’ not mattering as long as people don’t move… well, as I kept saying: it does. Asset busts are hugely painful to repair. Boris: “Historically there is only a weak link between deflation and output growth” despite everyone running like headless chickens with ‘deflation’s upon us’ meme. But, there is a “much stronger link with asset price declines (equity and esp property)”, despite the aforementioned exhortations to the contrary amongst many politicos. And worse: there are “damaging interplay of debt with property price declines”. Which is to say that debt by itself is bad enough. Debt written against dodo property values is much worse. Hello, negative equity zombies.

But the whole idea about ‘restarting the economy’ using new credit boost is bonkers: 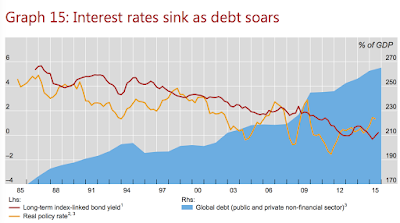 Because, as that hedgie said above, the corpse can’t take much of monetary zapping anymore.

Hence time to wake up and smell the roses. Borio puts that straight into his last bullet point of his last slide: 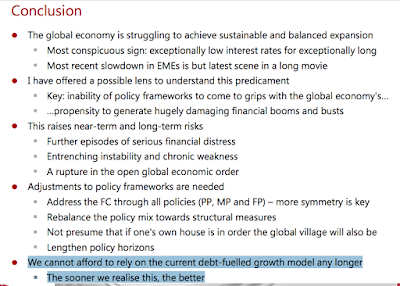 Alas, we have nothing to rely upon to replace that debt fuelled growth model either.