Three days ago, China released its trade data numbers for January 2016, and they weren't good. In addition to not being particularly reliable, even the strongest proponents of that data had to be sorely disappointed, because they indicated that China's exports plummeted by 11.2%, indicating a global recession, while China's imports fell by 18.8%, suggesting China's own economy experienced some pain.

Using more reliable data reported by the U.S. Census Bureau on the value of goods and services exchanged between the U.S. and China, we can show that both nations' economies were feeling pain in December 2015, the most recent month for which this data is available at this writing (data for January 2016 won't be available until 4 March 2016). 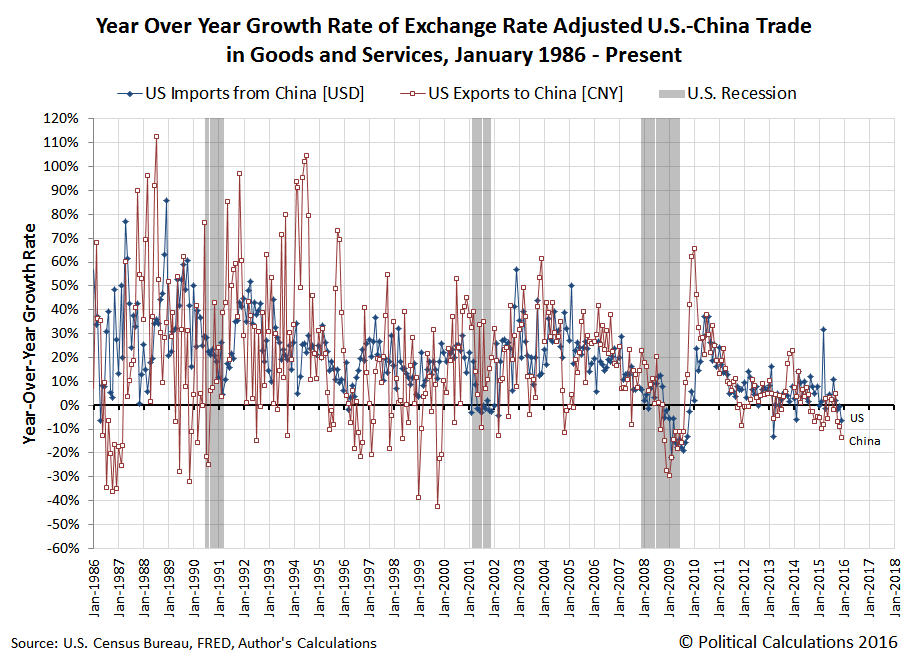 After adjusting for the exchange rate between the U.S. dollar and the Chinese yuan, we find that the year-over-year growth rate of China's exports to the U.S. dropped to -6.2%, suggesting that December 2015 was the worst month of the fourth quarter of 2015 in the U.S. At the same time, we find that the value of the year-over-year growth rate of the goods and services that China imports from the U.S. dove to -13.7%, the lowest figure on record since July 2009.

We can confirm that the decline in China's consumption of U.S. goods (primarily the agricultural product of soybeans during the months of October through December) occurred in both nominal and real terms. Tapping the U.S. Census Bureau's International Trade Statistics database for China, we found that China imported the following value of soybeans from the U.S. during these months in both 2014 and 2015.

Update 19 February 2016: Highlighted values in the bottom row of the chart above have been corrected!

For the fourth quarter of 2015, that value falls some $1.2 billion below the total value of all the soybeans that China imported from the U.S. in the same quarter a year earlier.

That confirms the decline in nominal terms, but we also recognize that the price of soybeans in 2015 was much lower than in 2014. That means that China could simply have been paying less for U.S. soybeans, but buying more. So, using the average price of soybeans that we calculated for the 12 months preceding October, November and December in both 2014 and 2015, we estimated the equivalent quantity of U.S. soybeans that China acquired in each year. Our results are summarized in the table below.

This outcome in part explains what we observed yesterday, where we found that layoffs in U.S. farm states began to notably rise in the months of November and December 2015. More interestingly, two of the states that we had identified as lesser finance industry states, Illinois and Minnesota, are also significant producers of soybeans, so the increase in new jobless claims in these states could be a considered to be in part a direct consequence of China's reduced appetite for U.S. soybeans.

On a final note, in previous months, we've also used changes in global atmospheric carbon dioxide levels as an independent indicator of China's economic health, since that nation is the world's largest producer of carbon dioxide emissions. Those levels continued to increase in December 2015 above the pace they did in previous months, indicating a increasing level of economic activity, which contradicts what the trade data is telling us.

We have an interesting hypothesis for why that might be, which we'll explore in the very near future. If you want to try to get there before us, the links to the relevant data are listed below.