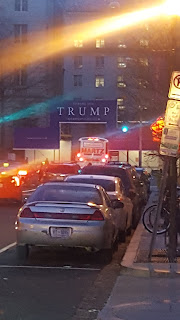 Donald Trump's presence is already clear in Washington DC.  A couple of blocks down from the White House a large placard announces that Trump is coming here in 2016.  Whether or not his company's renovation of the old Post Office building into its latest hotel (with what will be "Washington's largest ballroom" - just right for an inaugural ball) is a sign of a more serious presence in the nation's federal capital is yet to be seen, but as South Carolina's primary enters its closing phase as I write, Trump is starting to look like an unstoppable force.

If New Hampshire proclaimed Trump's ability to transcend the largely hostile coverage from the mainstream media, and his clear political potency after having been seen initially as a national joke, then South Carolina could be the primary that makes him the almost unbeatable front-runner.  Trump as president is not looking quite such a remote prospect today.

Of course, this extraordinary and unpredictable race still has many curves to navigate, but Trump as stayer and possible victor is shaping up as a clear line in the primary sands.  Cruz is his closest runner, and that is one of the reasons South Carolina is so significant.  Win there, and Trump shows that he is more than capable of winning the evangelical vote on which Cruz's run so much depends.  Cruz's appeal is narrow compared to the more iconoclastic Trump.

As for Rubio, as one MSNBC commentator noted today, coming 3rd., 5th., and 3rd does not constitute front-runner status.  He needs to win somewhere!

If South Carolina goes for Trump today, he may not need the swanky new hotel he's building.  There's a nice residence just down Pennsylvania Avenue just waiting for the New York billionaire to move in.