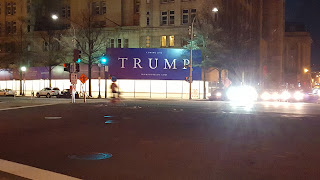 That sign - the one pointing in the direction of the White House - is looking ever closer to the truth.  Trump hasn't just won South Carolina, he's once again swamped his opponents.  While Jeb Bush finally acknowledges that his lame and unconvincing campaign really isn't going anywhere, Ted Cruz must also be feeling anything but glorious as he contemplates the failure of his vote to go beyond the already tied-in evangelicals.  As for Rubio, he's made it big - for the first time - by coming in second a bare few percentage points above Cruz.  Not exactly the aura of an invincible challenger to the galloping maverick in front of him.

It's still difficult to see how the Republican race might coalesce around a serious challenger to Trump, and in the meantime the Donald should start thinking about possible VP picks.  And here's a mould-busting thought.  Given that Hillary Clinton may finally have consigned her own opponent to the position of supporting act in the Democrat race, through a decent - though hardly mind-bending - victory in Nevada, there is an appealing insurgent available for other political duties.

Bernie Sanders is as much a maverick in his way as Trump, and his political positions are more nuanced than the campaign has really let on.  Trump, meanwhile, picked up plenty of moderates and independents in the South Carolina vote.  What about the power of a doubly insurgent campaign to clear up on American voters' detestation of "politics as normal"?  With this being the year of the challenger, could a Trump-Sanders ticket be either unbelievable or beatable?