Chinese Manufacturing PMI for February signalled worsening operating conditions in the sector and marked 12th consecutive month of recessionary readings, reaching 48.0 in February, down from 48.4 in January and down from 50.7 in February 2015.

Per Markit: “Operating conditions faced by Chinese goods producers continued to deteriorate in February. Output and total new orders both declined at slightly faster rates than at the start of 2016, which in turn contributed to the quickest reduction in staffing levels since January 2009. Lower production was a key factor leading to the steepest fall in stocks of finished goods in nearly four-and-a-half years during February. At the same time, lower intakes of new work enabled firms to marginally reduce their level of work-in-hand for the first time in ten months. Prices data indicated weaker deflationary pressures, with both selling prices and input costs
declining at modest rates.”

It is simply impossible to imagine how this data can be consistent with 6.9 percent growth recorded in 2015 or with over 6% growth being penciled for 1Q 2016. 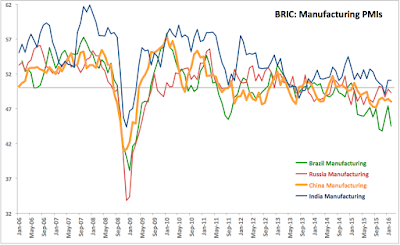 As shown above, China is now a consistent under-performer in the BRIC group since July 2015 with its Manufacturing PMI reading below that of Russia (in a recession) and above Brazil (in a deep recession).