Russian Manufacturing PMI for February produced another disappointment, falling from a marginally contractionary reading of 49.8 to somewhat faster contraction-signalling 49.3.

Per Markit, “Russian manufacturers reported a further deterioration in operating conditions during February, the third in as many months. Job cuts
were evident amid a sharp fall in backlogs of work. However, production remained broadly unchanged as a slight rise in new orders was reported. Meanwhile, price pressures remained evident, as both output charges and input costs rose.” So firms effectively were reducing their backlogs of orders, with work-in-hand reductions continuing now every month since March 2013.

On a slightly positive note, per Markit: “Russian goods producers recorded a slight expansion in new business volumes during February. According to anecdotal evidence, a higher volume of new work reflected the development of new products. However, the rise in new orders was driven by the domestic market, as new export orders declined further. The rate of contraction accelerated to the sharpest in 19 months and was marked overall.”

So the key reading from this data is that Manufacturing remains in a shallow downturn for the third month in a row, signalling a poor start to 2016 and leaving no doubt that the economy is now set to post another quarter of negative growth, unless there is a major improvement in Services sector readings in February and a major gain across both sectors in March. 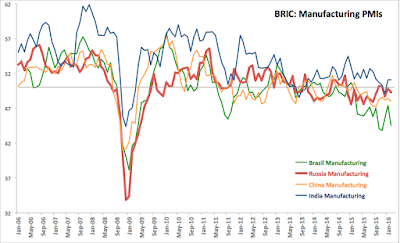