Not surprisingly, the global CO2 atmospheric concentration continues to rise.  It's getting into scary territory.  400 ppm hasn't been observed for a very long time.  What will happen next is still an open question but none of the guesses are encouraging.

World's carbon dioxide concentration teetering on the point of no return

The world is hurtling towards an era when global concentrations of carbon dioxide never again dip below the 400 parts per million (ppm) milestone, as two important measuring stations sit on the point of no return.

The news comes as one important atmospheric measuring station at Cape Grim in Australia is poised on the verge of 400ppm for the first time. Sitting in a region with stable CO2 concentrations, once that happens, it will never get a reading below 400ppm. 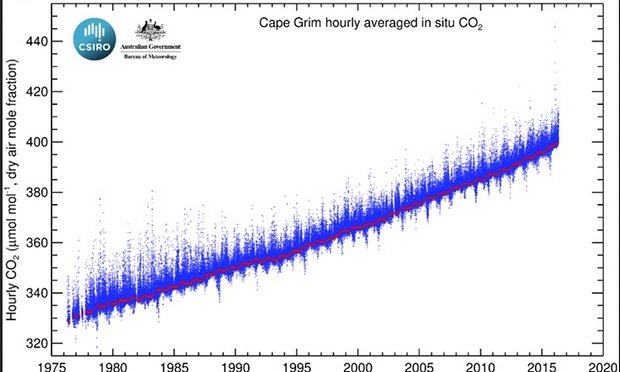 An atmospheric measuring station at Cape Grim in Australia is poised on the verge of 400ppm for the first time. Photograph: CSIRO

Meanwhile another station in the northern hemisphere may have gone above the 400ppm line for the last time, never to dip below it again.

“We’re going into very new territory,” James Butler, director of the global monitoring division at the US National Oceanographic and Atmospheric Administration, told the Guardian.

When enough CO2 is pumped into the atmosphere from burning fossil fuels, the seasonal cycles that drive the concentrations up and down throughout the year will eventually stop dipping the concentration below the 400ppm mark. The 400ppm figure is just symbolic, but it’s psychologically powerful, says Butler. 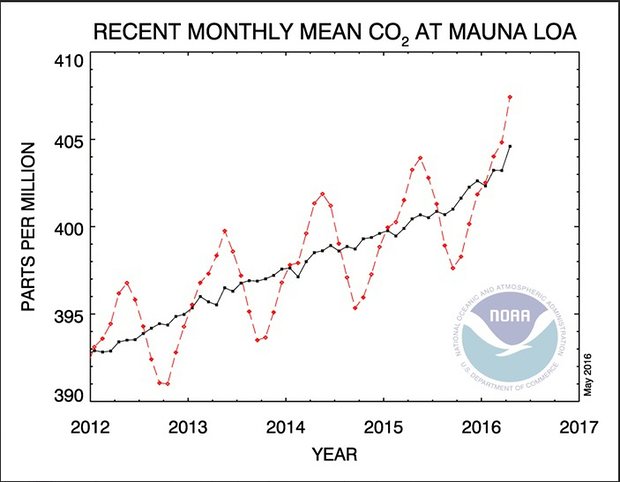 In Hawaii, the Mauna Loa station is sitting above 400 ppm and might never dip below it again. Photograph: National Oceanic and Atmospheric Administration

The first 400ppm milestone was reached in 2013 when a station on the Hawaiian volcano of Mauna Loa first registered a monthly average of 400ppm. But the northern hemisphere has a large seasonal cycle, where it increases in summer but decreases in winter. So each year since it has dipped back below 400ppm.

Then, combining all the global readings, the global monthly average was found to pass 400ppm in March 2015. 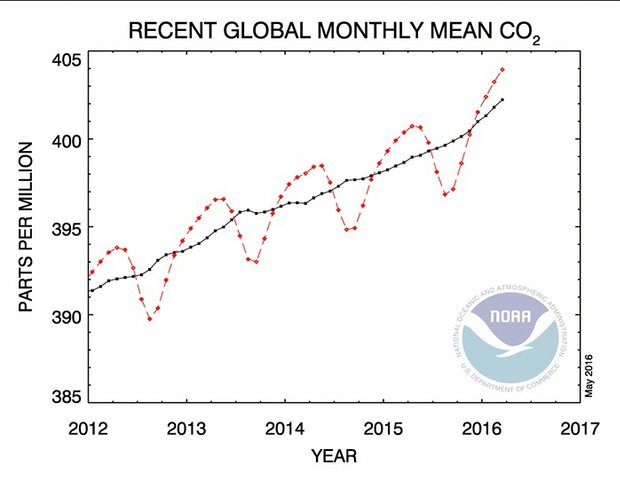 “We wouldn’t have expected to reach the 400ppm mark so early,” said David Etheridge, an atmospheric scientist from the CSIRO, which runs the Cape Grim station. “With El Nino, the ocean essentially caps off it’s ability to take up heat so the concentrations are growing fast as warmer land areas release carbon. So we would have otherwise expected it to happen later in the year.

“No matter what the world’s emissions are now, we can decrease growth but we can’t decrease the concentration.

“Even if we stopped emitting now, we’re committed to a lot of warming.”

Over in Hawaii, the Mauna Loa station, which is the longest-running in the world, is sitting above 400 ppm, and for the first time, might never dip below it again.

All together, the world is on the verge of no measurements ever showing a reading under 400ppm.

“There’s an answer to dealing with this and that’s to stop burning fossil fuels,” Butler said.

Butler also emphasised that this CO2 is locking in future warming. “It’s like lying in bed with your electric blanket set to three. You jack it up to seven – you don’t get hot right away but you do get hot. And that’s what we’re doing.”

The CO2 concentrations are driving what appears to be runaway climate change around the world.

This year has seen record hot global ocean temperatures, which have caused coral reefs all around the world to bleach and devastated Australia’s Great Barrier Reef.

Air surface temperatures have also been shocking climate scientists. Yearly and monthly temperature records have been breaking regularly, with many of the records being broken by the biggest margins ever seen.

“It’s pretty ugly when you look at it,” Butler said. more