Source: http://graphics.wsj.com/greece-debt-timeline/
Funny thing: Greece is currently illiquid, the financing deal is expected to be 'more than' EUR10 billion. Greek debt maturity from June 1 through December 31 is around EUR17.8 billion. Spot the problem? How much more than EUR10 billion it will be? Ugh?..So technically, Greece got money to cover money it got before and it is not enough to cover all the money it got before, so it looks like Greece is out of money already, after getting money.
As usual, we have can, foot, kick... the thing flies. And as always, not far enough. Pre-book your seats for the next Greek Crisis, coming up around 2018, if not before.
Or more accurately, the dead-beaten can sort of flies.
Remember IMF saying 3.5% surplus was fiction for Greece? Well, here's the EU statement: "Greece will meet the primary surplus targets of the ESM programme (3.5% of GDP in the medium-term), without prejudice to the obligations of Greece under the SGP and the Fiscal Compact." No,  I have no idea how exactly it is that the IMF agreed to that.
And if you thought I was kidding that Greece was getting money solely to repay debts due, I was not: "The second tranche under the ESM programme amounting to EUR 10.3 bn will be disbursed to Greece in several disbursements, starting with a first disbursement in June (EUR 7.5 bn) to cover debt servicing needs and to allow a clearance of an initial part of arrears as a means to support the real economy." So no money for hospitals, folks. Bugger off to the corner and sit there.
And guess what: there won't be any money coming up for the 'real economy' as: "The subsequent disbursements to be used for arrears clearance and further debt servicing needs will be made after the summer." This is from the official Eurogroup statement.
Here's what the IMF got: "The Eurogroup agrees to assess debt sustainability with reference to the following benchmark for gross financing needs (GFN): under the baseline scenario, GFN should remain below 15% of GDP during the post programme period for the medium term, and below 20% of GDP thereafter." So the framework changed, and a target got more realistic, but... there is still no real commitment - just a promise to assess debt sustainability at some point in time. Whenever it comes. In whatever shape it may be.
Short term measures, as noted above, are barely a nod to the need for debt writedowns: "Smoothening the EFSF repayment profile under the current weighted average maturity: Use EFSF/ESM diversified funding strategy to reduce interest rate risk without incurring any additional costs for former programme countries; Waiver of the step-up interest rate margin related to the debt buy-back tranche of the 2nd Greek programme for the year 2017". So no, there is no real debt relief. Just limited re-loading of debt and slight re-pricing to reflect current funding conditions.
Medium term measures are also not quite impressive and amount to more of the same short term measures being continued, conditionally, and 'possible' - stress that word 'possible', for they might turn out to be impossible too.
Yep. Can + foot + some air... ah, good thing Europe is so consistent... 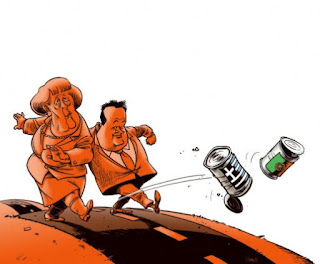